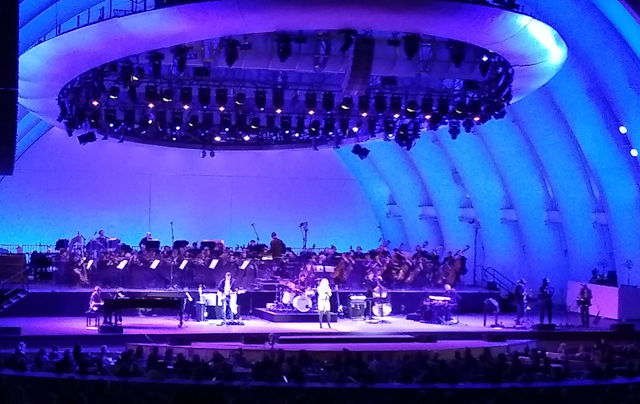 Photo by Bob Lee for the Los Angeles Beat.

Although her new album of jazz-infused cover songs, Valve Bone Woe, won’t be released for another couple of months, a balmy summer night was the perfect opportunity for Chrissie Hynde to take the Hollywood Bowl stage, with the LA Phil serving as a complement to her electric band. The voice and personality remained familiar, despite the radical change in sound and repertoire.

From the time of the Pretenders’ first album, it was evident that Hynde had a voice that could stand up with any conceivable instrumentation that she might choose, and this latest step into overt jazz territory takes that premise to its most leisurely extremes.

Hynde’s personal edition of the Standards Songbook runs rather noticeably to the slow, soft and lovely. Two of the first four songs performed that night – “I’m A Fool To Want You” and “I Get Along Without You Very Well” – were popularized by Frank Sinatra, with A.C. Jobim and Brian Wilson compositions sitting between them. Later she would enthuse over her favorite Barbra Streisand b-side, “Absent Minded Me”, before tackling it herself. None of these songs were likely familiar to a rock audience, with the exception of “Wild Is The Wind,” as crooned by David Bowie, and “Caroline, No,” the saddest, prettiest song in Brian Wilson’s massive catalog of sad, pretty songs.

Her approach to this material was recognizable to anyone who’s spent time with Pretenders albums. Hynde has considerable power, but wields it in an understated way, the vocal rhythms resembling the sound of conversation. She does not do histrionics or high notes, but when she does let it come pouring out, it’s all the way there. The extended slow burn over lush, string-soaked arrangements was sometimes spine-tingling, as during their version of Jobim’s “Once I Loved,” and the take on Nancy Wilson’s “How Glad I Am” that opened the second set. At other times, it was just slow, too many languid, restrained songs in a row for a Saturday night.

The energy in the hall took a definite turn every time an assistant came out to center stage to hand Chrissie a Telecaster, signalling Pretenders favorites were about to be played. “Brass In Pocket” closed the first segment, bringing the audience to its feet for the first time. At the midpoint of the second set, following event-appropriate torchy renditions of “Hymn to Her” and “My Baby,” she gave the orchestra a coffee break and started busting out hits in quick succession: “Talk of the Town,” “My City Was Gone,” “Message of Love,” “Kid,” “Back On The Chain Gang,” “Don’t Get Me Wrong” and “I’ll Stand By You,” bringing the LA Phil back for full grandiose effect on the latter.

Guitarist James Walbourne was the bedrock of the Pretenders’ last great lineup, the one that recorded Break Up The Concrete in 2008, and it’s great to have him on board. Even a full philharmonic orchestra has trouble competing with a small electric band playing these songs when the guitars are this huge.

Time will tell whether this foray into jazz will be a sustained activity or a pass-through. It certainly allows Chrissie Hynde to try to play to different strengths than are called for in her usual shows, which portends well for her future.