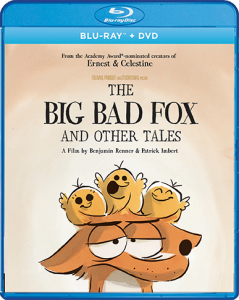 “The Big Bad Fox and Other Tales” (2017, Shout! Factory/GKids) Three cracked fables, in which several animals – including a hapless fox and a very anxious pig – discover that their capabilities extend far beyond their respective breeds. Amusing and confectionery-sweet 2D animation from French filmmakers Benjamin Renner (on whose comics this film is based) and Patrick Imbert aims more for laughs than its predecessor, the wistfully sweet, Oscar-nominated “Ernest and Celestine“; as such, it’s less memorable, but the frantic action and English voice cast, which includes Adrian Edmonson, Matthew Goode and Celia Imrie, should please kids and grown-ups alike. The Shout! Factory/GKids Blu-ray/DVD set has both the English and French dialogue tracks as well as interviews with the filmmakers and a making-of featurette. 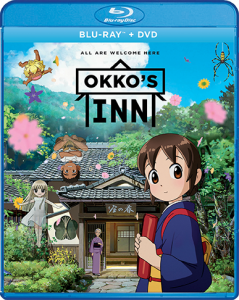 “Okko’s Inn” (2018, Shout! Factory/GKids) Having lost her parents in a car accident, a young girl finds friendship and solace in a trio of playful ghosts at her grandmother’s mountain resort. Director and Studio Ghibli vet Kitaro Kosaka (“Spirited Away”) strikes the right balance of kawaii and emotion in Okko’s interactions with the ghosts; very young viewers might find the parental death storyline unsettling, but older kids will be charmed by the colorful yokai and parents should appreciate its delicate approach to the complicated subject matter. The Shout/Gkids Blu-ray/DVD set bundles the Japanese and English language dubs with interview with Kosaka, who’s also featured at a Q&A at the Japanese premiere, and actor Seiran Kobayashi, who voices Okko. 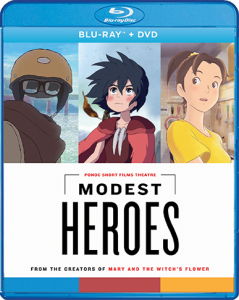 “Modest Heroes” (2018, Shout! Factory/Gkids) Ambitious anthology film from Studio Ponoc, an animation studio formed and anchored by Studio Ghibli artists and producers. As the title suggests, the three shorts that comprise “Modest Heroes” focus on seemingly insignificant people (or creatures) overcoming huge obstacles: a pair of young humanoid crabs braving open waters to find their father, a young boy with a life-threatening allergy, and a businessman who is not only invisible but also unaffected by gravity. The trio, directed by Hiromasa Yonebayashi (the Oscar-nominated “When Marnie Was There”), Yoshiyuji Momose and Akihiko Yamashita (“Howl’s Moving Castle”), carry on the Ghibli tradition of finding wonder and magic in unlikely places, and the importance of love and connection in a difficult world. The Blu-ray/DVD offers Japanese and English tracks (save on the crab people story, which uses a fictitious language) and detailed interviews with the filmmakers and voice-over actors. 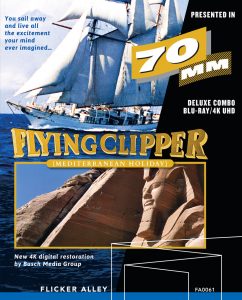 “Flying Clipper” (1962, Flicker Alley) Burl Ives narrates this German-made travelogue featuring the fresh-faced teenage crew of the titular Swedish schooner at both work and play at various locations throughout the Mediterranean. The boys’ adventures, which include visits to the Egyptian pyramids, a twist contest in Greece and the Grand Prix at Monaco (where newly minted Princess Grace Kelly can be glimpsed), are charming in small doses and gain much from the 70mm cinematography, but lack the sense of sweeping adventure that captured the attention of young audiences in the very similar Cinerama film “Windjammer.” Still, the score by Riz Ortolani and photography are gorgeous and mostly well preserved by the restored Blu-ray and 4K discs included in Flicker Alley’s set, which also features interviews with the film’s camera operator, the original trailer and a reproduction of the English-language program booklet. 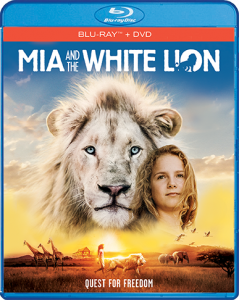 “Mia and the White Lion” (2018, Shout! Factory) A British tween (Daniah De Villiers) and a white lion cub grow up together on her family’s wildlife farm in South Africa, until both reach an age where their bond may prove unsafe. European/South African family/nature drama was filmed over a three-year period to lend verisimilitude to the actress and animal’s screen relationship; these scenes are genuinely sweet, but some young viewers – especially those with a strong affinity for cute animals – may find the plot twist, which involves not only girl and lion but her family, particularly grim. Interviews with De Villers and director Gilles de Maistre, as well as making-of featurettes that detail the close relationships between the human cast (which includes Melanie Laurent) and animal performers, are all present on Shout’s Blu-ray/DVD set.

Paul Gaita lives in Sherman Oaks, California with his lovely wife and daughter. He has written for The Los Angeles Times, LA Weekly, Variety and The Fix, among many other publications, and was a home video reviewer for Amazon.com from 1998 to 2014. He has interviewed countless entertainment figures from both the A and Z lists, but his favorites remain Elmore Leonard, Ray Bradbury and George Newall, who created both Schoolhouse Rock and the Hai Karate aftershave commercials. He once shared a Thanksgiving dinner with celebrity astrologer Joyce Jillson, and regrettably, still owes the late character actor Charles Napier a dollar.
View all posts by Paul Gaita →
This entry was posted in Movies and tagged Flicker Alley, GKids, shout factory, Studio Ghibli. Bookmark the permalink.