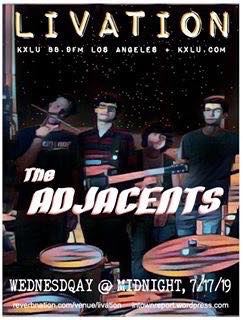 This week Livation welcomes The Adjacents to perform live on KXLU!  The band formed in 2012 in Hawthorne, CA and is a 4 piece with a pop/punk style.

The Adjacents go on between 12:15-12:30, a live interview follows. Livation is on every Wednesday night at midnight (PST) through to Thursday’s wee hours. Listen live at 88.9fm in Los Angeles or stream it live at kxlu.com everywhere! You can also listen on the KXLU phone app.

LIVATION airs on KXLU 88.9FM Los Angeles Wednesday nights at midnight to Thursday mornings at 2AM (PST). Deejays Robert & Hilary host and produce the show featuring a local or touring band playing LIVE on the air each week, with interviews following the performance. Listen worldwide on the live stream at kxlu.com or on the KXLU phone app. They also create The Intown Report, a listing of the best live shows in L.A., Orange County, and Ventura, available online at intownreport.wordpress.com. LIVATION has been on the air for 15 years having evolved from KXLU's HAPPY TRAILS (1990 - 2004) over 1400 bands having performed live between the two. Find out what bands are going to be playing live at: reverbnation.com/venue/livation
View all posts by LIVATION →
This entry was posted in Miscellanious. Bookmark the permalink.