Movies Till Dawn: Dr. Evil and His Terrors of the Unknown (Halloween 2019, Part 4) 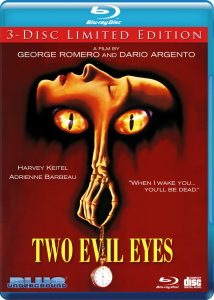 “Two Evil Eyes” (1990, Blue Underground) Dario Argento and George Romero offer broad and bloody interpretations of stories by Edgar Allan Poe: Romero’s “The Facts in the Case of Mr. Valdemar” adds a “Creepshow“/E.C. Comics spin, with Adrienne Barbeau as a scheming wife who has her ailing but wealthy husband hypnotized in order to steal his estate, while Argento’s “Black Cat” swings for the fences with Harvey Keitel as a photographer with a taste for the macabre plagued by the title feline long after its death. Both have their moments – Argento lays heavily on Tom Savini’s grisly make-up effects, while Romero makes some morbid comments on greed – and do better at reminding viewers of their talent than much of their later work. Blue Underground’s three-disc limited edition set bundles new interviews with cast and crew (including composer Pino Donaggio, whose score is included in the set) and commentary by Troy Howarth with vintage making-of pieces profiling the filmmakers and Savini. 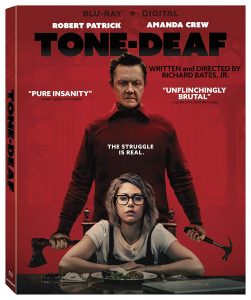 “Tone-Deaf” (2019, Lionsgate Home Entertainment) Amanda Crew‘s terrible day, which encompasses the loss of both her boyfriend and job, grows exponentially worse when she discovers that the crotchety owner (Robert Patrick) of her weekend getaway house is a psychopath with an axe (and other sharp objects) to grind over millennials like her. Fitfully amusing horror-black comedy benefits from its two leads, who keep the script from tipping into bland generalizations about Older vs. Younger, or when writer-director Richard Bates, Jr. indulges in long, uncomfortable moments of ugliness (a bit involving a spider and contact lenses) or weirdness (Patrick’s spells of dementia and Crew’s LSD freakout, both of which play like exuberantly odd experimental dance sequences). Lionsgate’s Blu-ray includes a making-of doc. 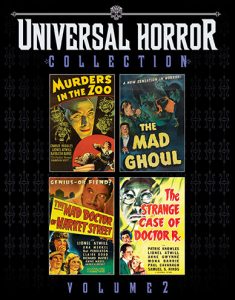 “The Mad Ghoul” (1943, Shout! Factory) The ghoul in question here is not star George Zucco but his nice guy assistant, David Bruce, who is transformed by Zucco into a sort of zombie using an ancient nerve gas used by the Mayans in their human sacrifices (!) in order to get his paws on Bruce’s girlfriend, Evelyn Ankers. Black-and-white horror from Universal’s B-picture unit is surprisingly grisly – Bruce is kept alive by fluids drained from the hearts of the recently deceased – and sports a wealth of graveyard atmosphere and makeup effects by Jack Pierce (“Frankenstein”) to compliment an agreeably loony turn by perennial horror heel Zucco. With Robert Armstrong (“King Kong”); Shout’s Blu-ray, part of its “Universal Horror Collection, Volume 2” set, includes a hi-def remaster and commentary by historian Thomas Reeder. Also in Volume 2: “The Mad Doctor of Market Street” (1942), a curious mix of mystery, science fiction and jungle adventure from the dependably iconoclastic Joseph H. Lewis, with Lionel Atwill as a scientist conducting reanimation experiments on shipwreck survivors, including comic relief Una Merkel and Nat Pendleton. 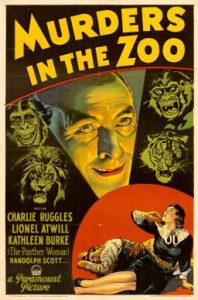 “Murders in the Zoo” (1933, Shout! Factory) Speaking of Lionel Atwill, he also stars in “Zoo” a Great White Hunter who uses jungle animals to dispatch would-be suitors of his wife (Kathleen Burke, the Panther Woman from “Island of Lost Souls“). Indie thriller released by Paramount (and acquired by Universal during a buyout) opens with the sight of a man with his mouth sewn shut (by Atwill after he kissed Burke) and revels in grisly deaths from that point on, including fatal snake bites and characters devoured alive by alligators and boa constrictors. Charlie Ruggles is on hand to lighten the mood with a tipsy act, but “Zoo,” directed by former silent comedian A. Edward Sutherland, remains one of the nastiest Pre-Code chillers, and one still capable of delivering the creeps. Shout’s Blu-ray, also part of the “Universal Horrors Collection Volume 2,” has a hi-def master and commentary by Gregory William Mank; the set is rounded out by “The Strange Case of Dr. Rx” (1942), with Atwill as a red herring (named Dr. Fish, no less) in an out-to-lunch mystery investigated by husband and wife crimesolvers Patric Knowles and Chris Pine’s grandmother, Anne Gwynne. Shemp Howard, Mantan Moreland and a gorilla figure into the proceedings, which might make it required viewing. 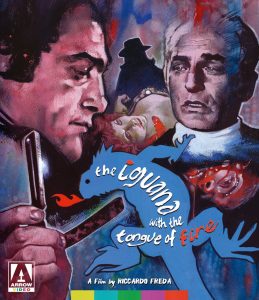 “The Iguana with the Tongue of Fire” (1972, Arrow Video) Disgraced police detective Luigi Pistilli discovers that the appearance of a woman’s mutilated corpse in the trunk of Swiss ambassador Anton Diffring‘s car is only the first in a series of grisly killings committed by a black-gloved killers. Most Eurocult fans give the gas face to this violent thriller by Italian horror pioneer Riccardo Freda (who also disliked the film), largely because of its absurd plot (which says much in a subgenre not known for its cohesive plots), which is loaded with red herrings, characters that simply disappear, and shenanigans involving a bobsled and a dead cat (though not at the same time). Having said that, the flaws in “Iguana” do create a sort of dream-logic through which wafts the over-the-top violence, Stelvio Cipirian’s airy, gorgeous pop score and the eccentric cast (which includes Dagmar Lassander and Werner Pochath), heedless of focus or plotline. Arrow’s Blu-ray provides both English and Italian versions of the film, commentary and video essays that take a fairly honest look at its pros and cons, interviews with Lassander and editor Bruno Michelli, and a wealth of promotional material. 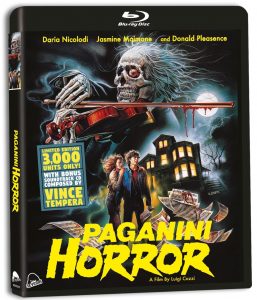 “Paganini Horror” (1989, Severin Films) A down-on-its-luck synthpop band (which may be a redundancy) believes that an unpublished composition by the 18th century violinist Niccolo Paganini – purchased from a decidedly sinister, if seemingly pickled Donald Pleasance – is just the piece of music to turn around their fortunes, but instead, appears to bring them to the attention of a masked killer. T’aint good, this Italian-made supernatural thriller, but director Luigi Cozzi and his cast – which includes Dario Argento’s ex-spouse/collaborator Daria Nicolodi – seem aware of that status, and deliver the loudest, silliest, goriest horror-rock hybrid allowed by their budget which, as such, should delight junkfood film fans and Eurocult completists. Severin’s Blu-ray includes a self-effacing interview with Cozzi, deleted and alternate scenes, and a full CD of Vince Tempera’s over-the-top score.

Paul Gaita lives in Sherman Oaks, California with his lovely wife and daughter. He has written for The Los Angeles Times, LA Weekly, Variety and The Fix, among many other publications, and was a home video reviewer for Amazon.com from 1998 to 2014. He has interviewed countless entertainment figures from both the A and Z lists, but his favorites remain Elmore Leonard, Ray Bradbury and George Newall, who created both Schoolhouse Rock and the Hai Karate aftershave commercials. He once shared a Thanksgiving dinner with celebrity astrologer Joyce Jillson, and regrettably, still owes the late character actor Charles Napier a dollar.
View all posts by Paul Gaita →
This entry was posted in Movies and tagged Arrow Video, Blue Underground, Lionsgate Home Entertainment, Severin Films, shout factory. Bookmark the permalink.