Review: LA Opera’s Psycho and The Light in the Piazza 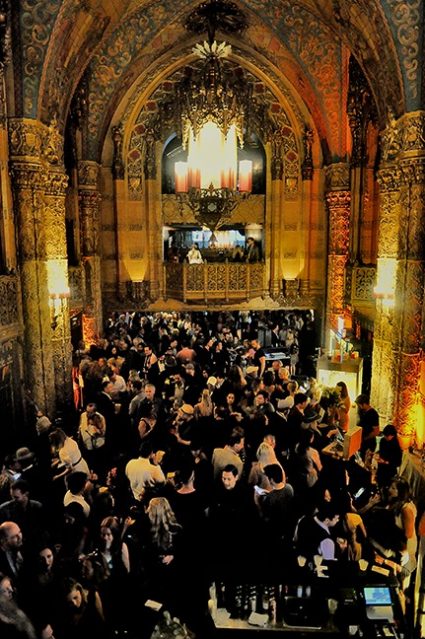 Theatre at the Ace Hotel

LA Opera Off Grand’s presentation of Psycho with live score is a great night at both the movies and the orchestra. Watching the Alfred Hitchcock thriller on the big screen at Theatre at the Ace Hotel, I became so engrossed in the experience that I almost thought it was the 1950s and the venue still the original United Artists Theatre. Musically, the orchestra was on point, with young conductor Louis Lohraseb leading the orchestra along with one eye on the score and another on the film.

The live musical performance and the recorded dialogue work seamlessly together, a tribute to both director Hitchcock and composer Bernard Hermann, as well as the LA Opera Orchestra. The gripping theme plays over the opening credits like the overture for an opera, and you are initially aware of both. As the story takes root, you are still aware of the music, which adds to the unsettling nature of the picture, but as in a staged opera, it becomes part of the total immersive experience.

Psycho deserves every bit of its status as a classic film. It actually straddles two genres, film noir and horror. Initially, it appears to be a noir picture about a bank clerk who is tempted to embezzle $40,000 to start a new life. Midway through, it turns into the prototype of the slasher movies that were so popular in the 70’s and 80’s (and never really went away). One could argue that Psycho takes noir to its logical conclusion. The shower scene and “The Murder,” the accompanying musical piece, represent a signal moment in the development of horror cinema. The violence of both is still shocking; Hitchcock’s presentation of it is realistic and graphic in a way that was unprecedented upon its first release in 1960, and his discretion in choosing which parts to show and which to conceal are what makes it so effectively frightening. A knife, a scream, blood going down the drain–your brain can fill in the rest. Two performances remain, and I can’t recommend it highly enough.

LA Opera’s previous production at the Music Center, The Light in the Piazza, could hardly have been more different in tone but was just as gripping and enjoyable in its own right. Based on a novel by Elizabeth Spence (by coincidence, also from 1960), the musical by Adam Guettel and Craig Lucas featured clever set design and costuming that that evoked 1950s Italy perfectly. Sung in English and Italian, the decision not to use supertitles for the latter was effective. Like the American characters on stage, I couldn’t always be certain what words they were saying, but the emotions always cane through.

The performances were spectacular across the board; Renèe Fleming reconfirmed her diva status in this not-quite-an-opera, to the delight of the Opera’s base; Dove Cameron, a star of Disney’s “Descendants” series thrilled the unusually large contingent of tween girls in the crowd while winning the rest of us over. Male leads Rob Houchen and Brian Stokes Mitchell were strong as the male leads, and veteran soprano Mary McLaughlin stole every scene she was in, so commanding in the part of an Italian matron that you would never guess she was a Scot.

Psycho Live! with the LA Opera Orchestra, conducted by Louis Lohraseb. 8 p.m. on October 30 & 31, 2019, with an all-ages after-party and costume contest on Halloween Night. Presented by LA Opera Off Grand at Theatre at Ace Hotel, 929 South Broadway, Los Angeles, 90015. Tickets available from $20 at LA Opera.