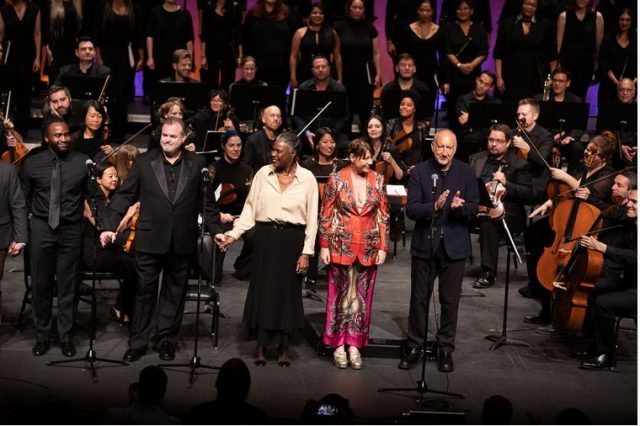 Composer Rachel Fuller gave the American premiere of her Animal Requiem at UCLA’s Center For The Art of Performance on Saturday, a novel work combining segments of the traditional form – “Kyrie Eleison”, “Pie Jesu” et al – with novel elements such as the Prayer of St. Michael and Paul McCartney’s “Blackbird” – sung on this occasion by Fuller’s husband Pete Townshend – added at the composer’s whim, to form her intended tribute to beloved pets that have left us. Her work was given a robust performance by the Hollywood Studio Orchestra, a full choir, and featured soloists.

As a former Episcopalian choirboy during the 1970s and 80s, Fuller’s style of composition is immediately familiar to me. It’s tonal, but modern, capable of stretching its harmonics in an impressionistic way that’s inherently pleasing to the ear raised on Western classical music. Variations on repeated themes – descants, we called them – reveal new possibilities from those core melodies, or riffs, growing more elaborate as they go. It’s a type of classical music that correlates, funnily enough, to your more sophisticated British pop music in the kind of intervals and harmonies that open up as it grows more complex.

Soloists Bruce Sledge (tenor) and Caroline McKenzie (soprano) both impressed during their spotlighted numbers. Sledge’s clear tenor brought drama and grace to the proceedings. McKenzie’s bit was ethereal and utterly transfixing, the longing and devotion in the “Pie Jesu” lyric made tangible through her bravura performance and Fuller’s haunting arrangement.

Townshend’s appearance at this event was certainly a drawing point for many members of the audience, heard discussing their impressions of the recent Who concerts at the Hollywood Bowl while in line for drinks during intermission. He was visibly nervous as he took the stage following a bravura finale from Sledge, McKenzie and the choir, but gave an affecting vocal performance of the Beatles’ classic over the lush orchestration. Of course, Pete has gotten used to singing over an orchestra at this last run of Who gigs, which must have helped.

The orchestra offered a thoroughly enjoyable romp through Camile Saint-Saens’ “Carnival For The Animals” as an opener. Actress Jane Lynch narrated the brief, Odgen Nash-like animal poems that that preceded each selection. The animal theme extended further to the lobby, where audience members had contributed memorials to their own furry friends.

Townshend had hinted on his personal Instagram that he might do a couple of rarely-played dog-themed numbers from the early 70s at this show (smart money was on “Greyhound Girl” and “Sleeping Dog” based on the hints offered), but the show ended as the orchestra filed off stage. Though the opportunity to see those songs performed in the flesh would have been most welcome for us Who freaks in the audience, it would honestly have been somewhat out of place with the grand goings-on of a full orchestra performance. Here’s hoping that we do have the chance to see Pete play songs from that part of his repertoire, live and in person, before too long.

This entry was posted in Music and tagged animal requiem, live review, Pete Townshend, rachel fller, The Who, UCLA. Bookmark the permalink.