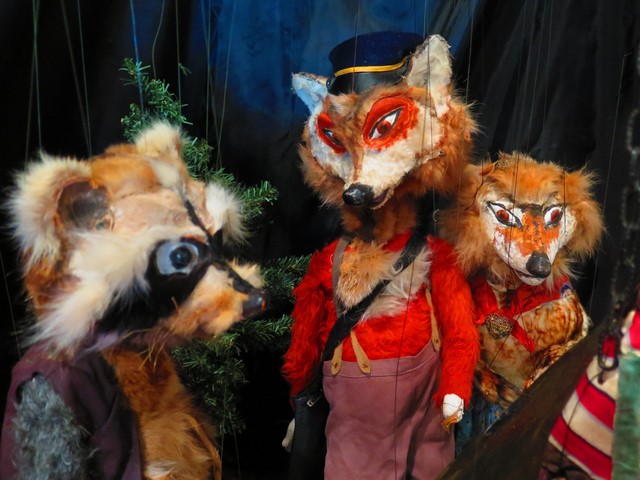 Black Friday has a reputation for being one big, grabby, greedfest. Nowadays with early Black Friday prices and Cyber Monday, you don’t have to fight the crowds unless you get off on the madness. For those of you looking for another way to spend the bonus holiday, we have compiled a list of fun and offbeat activities for both the innocent and the naughty.

Drink Beer at this 5K!

Both Golden Roads locations–in Anaheim and Los Angeles–will be hosting fun runs starting at 9 AM. It’s too late to register, but you can cheer on the runners while enjoying Get up Offa That Brown or the brewery’s new fruit cart-inspired wheat ales. It is a benefit for dog charities and the day is also dog-friendly.

Party with Me, Puppet!

Celebrate the 56th birthday  of the Bob Baker Marionette Theater and grand opening of their new location in Highland Park. Its cult following has made the Bob Baker Marionette Theater and LA staple, and I’m not sure you’re a true Angeleno until you seen one of these fun, campy shows. After the ribbon cutting at 10 AM, there will a day full of free puppet shows, tours of historical exhibits and their new ice cream parlour backstage until 5 pm.

At 7 PM there will be a special performance of “Rise of the Harlequins!” Their first formal show will see the Harlequin Clowns rise for the very first time in the new location! Tickets are being sold at the “commemorative price” of $56.

Brunch at a Private Airport!

You have probably never had brunch in Hawthore, much less the Hawthorne Airport. Eureka! is celebrating the holiday weekend with craft beers, small batch whiskeys, and craft cocktails selections, as well as brunch offerings from 11 AM until 2 PM that include $5 Bloody Marys and Mimosas. Try a typical LA breakfast like their breakfast burrito, Chilaquiles or Bread Pudding French Toast, or order a hearty lunch of Fried Chicken and Sweet Cornbread. Afterwards, check out the Dairy Queen on Hawthorne Boulevard, early hangout of the Beach Boys. there is also a Eureka! at The Village, Topanga, but Shopping Center + Black Friday = NOPE.

Hakata Ikkousha in Downtown Los Angeles will be offering their Yatai-style ramen for only six dollars at both lunch and dinner. Yatai is a classic style of ramen often sold on the streets at night in Hakata. Made with their award-wining tonkotsu (Pork bone) broth.

Make out at the Drive In!

Or have some wholesome family fun. Your choice. The Roadium Open Air Market in Torrance will be showing Willy Wonka & the Chocolate Factory from 5:45 PM – 9:45 P.M. (Movie screens at 7 PM). And it’s the cool Gene Wilder Willy Wonka. Priced per carload at $20. No hiding in the trunk like we used to have to do! There will be food trucks and other vendors for snackables.

Check out Some Cool Punk with a Dead Clown!

Friday night our own Tequila Mockingbird and Carl, proprietor of CIA (California Institute for Abnormalarts) will be presenting a cool lineup with punk rock luminaries Fur Dixon from the Cramps, Tommy Chiffon Three, Atomik Kangaroo and Rocket To Uranus, plus films from Rad TV, Tequila TV, and Video Louis! The trippy NoHo club alone is worth a visit. It’s like an Asian bar, a circus sideshow and movie set all in one, reputed to be decorated with three real dead bodies, including a dead clown.

Get Dark at the Hi Hat’s Black Metal Friday!

DJ sets by Lives Torn Apart will turn the Hi Hat on York into a Black Metal bash. The bar only sells beer and wine, and there is a kitchen. The free party starts at 8 PM. Warning: street parking can be a bitch.

Whip it Good at Sanctuary!

Born and raised in the great city of Los Angeles, this food, culture and music-loving punk rock angeleno wants to turn you on to all that is funky, delicious and weird in the city. While Elise holds down the fort, her adventurous alter ego Kiki Maraschino is known to roam the country in search of catfish.
View all posts by Elise Thompson →
This entry was posted in Art, Cocktails, Beer, Wine & Weed, News & Sports, Theater. Bookmark the permalink.