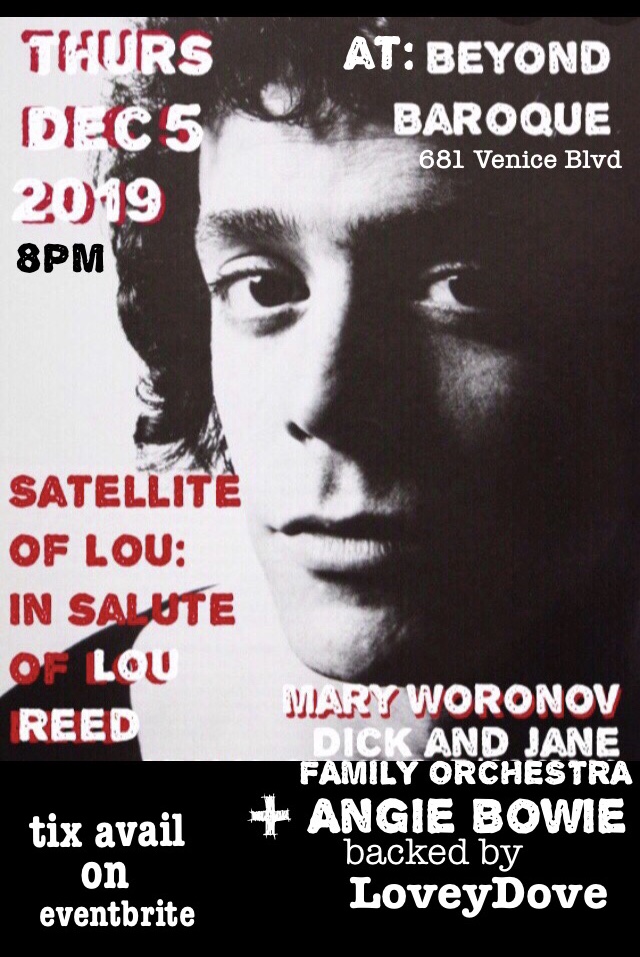 An unquestionable genius, Lou Reed’s importance in rock and roll history, particularly in germinating the earliest seedlings of punk rock, cannot be denied. From the Velvet Underground, through decades of solo work, to his death in 2013, Reed’s brilliance burned brightly. To celebrate the man, the myth, the legend, an upcoming event at Beyond Baroque Literary & Arts Center scheduled for Thursday December 5th  Satellite of Lou promises to summon his spirit with an evening of live music and intimate stories.

Conceptualized by Los Angeles based singer-songwriter Azaila Snail, once a NYC neighbor of Reed’s, the presentation brings out underground legends Mary Woronov and Angie Bowie as raconteurs, weaving their personal memories and reflections of Reed, interspersed with Velvet Underground songs performed by the Dick and Jane Family Orchestra and the band LoveyDove.

Mary Woronov’s artistic mystique and credibility runs deep. As muse to Andy Warhol, she was one of the Factory regulars, cementing her cult status in one of Warhol’s Screen Tests, then playing character Hanoi Hannah in Warhol’s 1966 film Chelsea Girls and as a whip dancer in the Exploding Plastic Inevitable, Warhol’s avant-garde multi-media happening featuring the Velvet Underground. Woronov’s friendship with Reed and Warhol inspired her book Swimming Underground: My Years in the Warhol Factory (1995). An amazing figurative painter today (Mary Woronov Paintings), she’s appeared in over 80 films including the Roger Corman produced Death Race 2000, as principal Togar in the Ramones classic Rock ‘n’ Roll High School, as half of a murderous couple in Eating Raoul and in Rob Zombie’s 2005 film The Devil’s Rejects. After moving to Los Angeles, Woronov became involved in the early L.A. punk music scene and befriended Jane Cantillon, who will be leading Mary’s Beyond Baroque interview and performing with the Dick and Jane Family Orchestra. Through Woronov’s connection, Cantillion also had a memorable role in Eating Raoul in which she finds herself campily killed in a hot tub.

Angie Bowie has her own Lou Reed stories to tell given that ex-husband David Bowie was a life-long friend and collaborator to Reed. David met Lou in 1971, one year after Angie & David’s marriage, the same year as the birth of their son Duncan Jones aka Zowie Bowie. Angie was around when David produced Reed’s Transformer album in 1972 and she eventually went on to write the book Backstage Passes: Life on the Wild Side With David Bowie about a decade after the couple’s 1980 divorce. Angie, a witty storyteller, will perform alongside LoveyDove, a delicious duo consisting of Azalia Snail and husband Dan West.

Be forewarned that the event space only holds about 100 people and will likely sell out. Beyond Baroque opened in Venice, CA in 1968 and has a long literary history beginning with the Venice Beat poets and continuing in the ’70s with Tom Waits and countless other writers, musicians and artists. It was the meeting place of Exene and John Doe, who went on to form L.A. punk band band X and the center continues to support and advance new writers and multi-disciplinary artists. Proceeds go to My Friend’s Place, a Hollywood organization set up to help and inspire homeless young people.

Nikki Kreuzer has been a Los Angeles resident for over 30 years. When not working her day job in the film & TV industry, she spends her time over many obsessions, mainly music, art and exploring & photographing the oddities of the city she adores. So far she has written 110 Offbeat L.A. articles, published at the Los Angeles Beat. As a journalist she contributes regularly to LA Weekly, Blurred Culture and The Los Angeles Beat and has also been published by Oddee.com, Twist Magazine, Strobe and Not For Hire. Nikki is also a mosaic artist, radio DJ and published photographer. Her photography has been featured in exhibit at the Museum of Neon Art, in print at the LA Weekly and is part of an upcoming show at the Neutra Museum in Los Angeles. She has recorded with the band Nikki & Candy as bassist, vocalist and songwriter, directing and appearing in the 'Sunshine Sunshine Santa Claus' music video for the band. She co-hosts the monthly radio show Bubblegum & Other Delights on Dublab.com. Her acting credits include a recent role in the ABC-TV show 'For The People', 'Incident at Guilt Ridge', 'Two and a Half Men', the film 'Minority Report' and 'Offbeat L.A.', a web series, written and hosted by Nikki Kreuzer. Her writing, radio and video portfolio can be found at OffbeatLA.com, her photography work @Lunabeat on Instagram and her music history posts @NikkiKreuzer on Twitter. Find Nikki & Candy music on iTunes, Amazon or at NikkiandCandy.com.
View all posts by Nikki Kreuzer →
This entry was posted in Art, Books, Events, Miscellanious, Music, Offbeat LA and tagged Angie Bowie, Azalia Snail, Beyond Baroque, Lou Reed, LoveyDove, Mary Woronov, Nikki Kreuzer, Offbeat L.A.. Bookmark the permalink.