Power to the People, You Dig? 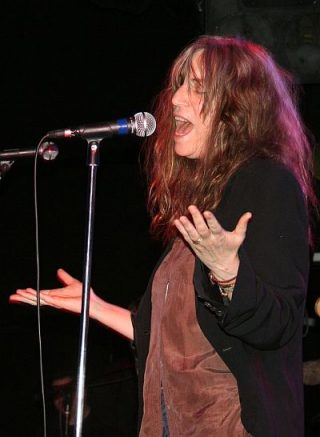 The Los Angeles Philharmonic embarks on another ambitious musical and cultural festival this week with “Power to the People!” Exploring the role that the arts play in society and protest movements, programming runs from March 5th through April 11th. The festival begins on Thursday at 8, as festival curator Herbie Hancock performs with Gustavo Dudamel and the orchestra, followed by a concert with Patti Smith and Her Band on Friday, March 6th. These two shows are sold out, but there are plenty of other events to choose from if you missed out on tickets, including two free concerts with composer Imani Uzuri, who conducts her Revolutionary Choir salon, teaching and encouraging audiences to sing protest songs, at 2 pm Saturday, March 7th at the California African American Museum and the next day at 1 at Disney Hall; registration for these events at CAAM’s website. Dudamel and the Philharmonic are back at Disney Hall with a concert featuring the Puerto Rican rapper Residente on Saturday at 8 and another with vocalist Yolanda Adams and the West Angeles Church of God in Christ Chorus on Sunday at 2 pm, featuring compositions by Ellington and Jessie Montgomery.

The rest of the festival features an interesting mix of music, conversation, and performance spread out between Disney Hall, CAAM, and at A Noise Within. The second week begins on Tuesday, March 10th, with a recital by pianist Conrad Tao centered around two protest suites by Frederic Rzewski and also including a sonata by Copeland.  Hip hop aficionados will want to attend the free panel discussion at 7 pm on the 11th at CAAM including, among others, the rap legend Rakim.  Jazz fans will be interested in the two events featuring trumpeter and composer Terence Blanchard; first, a discussion at CAAM, free and open to the public, at 7 pm on March 12th, then in a ticketed concert on March 14th at 8 pm devoted to the music he wrote for the films of Spike Lee, featuring his group the E-Collective, the LA Philharmonic conducted by Damon Gupton and special guest Ben Harper. Friday the 13th’s program takes place at A Noise Within in Pasadena, with the company performing staged readings of three of Luis Valdez’s early, politically charged plays. One of the festival’s can’t miss events happens on March 15th when Cecile McLorin Salvant, perhaps the most fascinating young singer in jazz, presents her new song cycle “Ogresse” at 7:30 pm.

Dr. Angela Davis delivers a lecture at Disney Hall on Wednesday, March 18th at 8 pm. Entitled “Power to the Imagination,” it addresses the role of creativity and the arts in social change; alas, this event is sold out. Another free event takes place at Disney’s BP Hall on Saturday the 21st, as cellist Seth Parker Woods composer Spencer Topel revive “Iced Bodies,” a performance art piece from the 1970s, into a 21st century incarnation. The remaining Philharmonic concerts include the west coast premiere of “Place,” a staged oratorio by composer Ted Hearne with a libretto by the poet Saul Williams. Not content to let the adults have all the fun, “Power to the People!” concludes with two special editions in the Toyota Symphonies for Youth series at 11 am on April 4th and 11th.  For more information and tickets, including an introductory video with Herbie Hancock, visit laphil.com.

This entry was posted in Art, Music, Theater, Upcoming Events. Bookmark the permalink.

One Response to Power to the People, You Dig?