Pick up a 6-pack of Ice Cream at Paradis 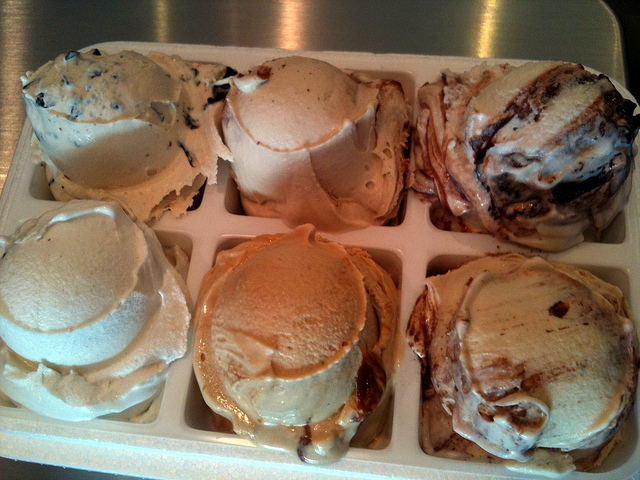 It turns out Denmark has more to offer than just beer, hot blondes and fabulous 50s furniture. Paradis, a Danish franchise has come to Los Angeles. The little shop in Los Feliz (the other one is in Montrose) offers homemade ice cream in a wide variety of flavors more commonly seen in gelato, such as Tiramisu and Almond Chocolate-chip. The similarity does not end there. Lower fat and only 20% air makes the ice cream creamier, denser and richer, more like gelato than traditional ice cream.

Speaking of hot blondes, the founder of Paradis is a hot, scruffy-faced named Thor. Yes. Thor. After working in a gelateria (did I just make that word up?) in Rome, he wanted to make a Danish version with less fat using only the freshest ingredients. Freshness is emphasized to the point where all of the ice cream is made fresh in each store every day.

Half of the counter is dedicated to sorbets, mostly in fruit flavors. Which is really better, some attempts at chocolate sorbets can be really weird. They appear to be vegan, but the website said that traces of dairy can be found in the sorbets. Those with nut allergies should also stay away, but the sorbets are gluten free.

Our favorite feature of Paradis is the cute six-scoop styrofoam “cool box,” which guarantees to keep your ice cream cold for 45 minutes. But for us it’s all about sampling. If you want a quart of ice cream you don’t have to stand there endlessly pondering your choices, but can order with complete abandon!