Live Review: A Celebration of Miles Davis At The Hollywood Bowl 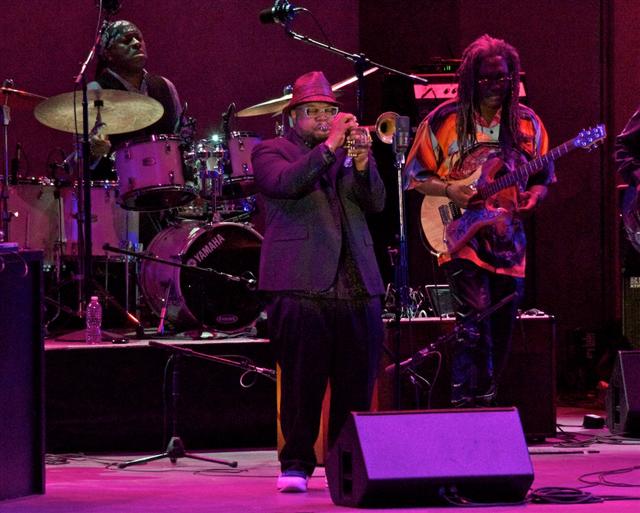 The Bowl’s 2012 jazz season kicked off on Wednesday with a tribute to the work of Miles Davis, presenting three contrasting yet complementary sets performed by at least five generations of musicians. Some were Davis’ former band members, the others were younger guns that, one imagines, might be in his current band if he had one. It proved to be a spirited, at times righteously loud experience, reverent to the spirit of Davis’ relentless push forward without trying to re-create the performances heard on his albums.

Following a brief ceremony dedicating the new Miles commemorative stamp from the US Post Office, at which Henry Rollins, Metallica’s Robert Trujillo and members of the Davis family addressed the crowd gathered in the Bowl’s Museum Terrace, the musicians started opening their time capsules, and what they found inside was sometimes surprising

Jimmy Cobb, the last man standing from the celebrated lineup that recorded 1957’s Kind Of Blue,  opened the show with a performance of his own band playing that album from front to back. Cobb, at 85, still has the agility and strength to swing the band without breaking a sweat, and every one in his crew of players –  trumpeter Jeremy Pelt, saxophonists Vincent Herring and Javon Jackson, pianist Larry Willis and bassist Buster Williams – found a home inside Davis’ sketchy compositions, a comfortable place to let loose. While most of the arrangements were fairly faithful to the original structures, “All Blues” was taken at double-time, turning brighter and appropriately enough, more celebratory.

The set by the Miles Electric Band , however, was faithful only to the spirit of Miles’ late sixties and early seventies albums, which gave birth to jazz-rock fusion. Davis’ songs on these albums are less roadmaps than suggestions, very loose ideas left wide open to interpretation by the players. The percussion-heavy group of former Davis associates, fronted by Nicholas Payton on trumpet, took the oddly-shaped ball and ran with it, stretching and constricting the songs, reshaping them in the moment. The presence of turntables on stage had some of the audience shaking their heads, but as the band started to really head for outer space, DJ Logic proved to be a worthy and effective collaborator.

Bassist Marcus Miller dared to expand the program by dropping a pair of his own recent compositions into a set of songs from Tutu, one of Davis’ final recordings. Miller wrote the lion’s share of the songs on that album and while he was careful to note that “this is a song we think Miles might like” while introducing “Jekyll And Hyde”, it was clear that the new tunes were intended as a brief nod to the future, a rare thing to find in a tribute show to a dead composer. “We’re here tonight to look back, and that puts us in dangerous territory, because what’s the one thing Miles never did?” But the new tracks fit the Tutu mood perfectly, and Miller’s effortless, lyrical playing, along with robust support from his band, made for an inspired closing set.

One Response to Live Review: A Celebration of Miles Davis At The Hollywood Bowl