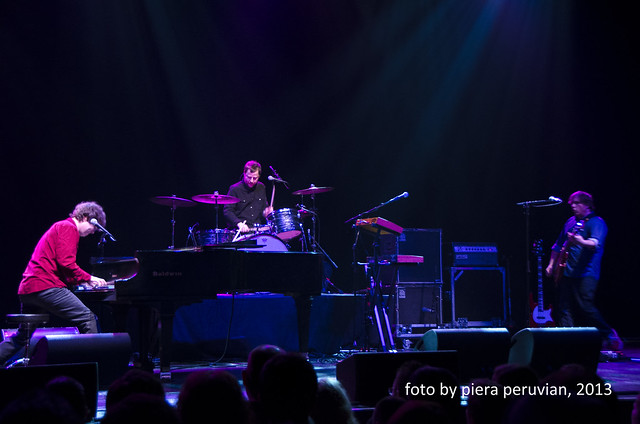 Saturday at The Wiltern saw the return of piano, bass, and drums trio Ben Folds Five.  Their first Los Angeles show after a thirteen year hiatus…

Has it really been THAT long?!

This was my 2nd favourite band in my early teens.  I still remember staying up late to catch a double bill of Sessions at West 54th Street on PBS with my then-favourite of all time, Beck and being blown away by how amazing and energetic this band was (Beck’s performance on West 54th, for the record, was on a completely different mind-blowing level.  More on that if I ever get a chance to review him live).

Unaware that they had broken up and recently gotten back together again, I listened to their new album The Sounds of The Life of The Mind prior to the start of the tour.  A pretty strong record this is.  It can be put up against any of their earlier works and hold its own quite well.  Perhaps the songs are a bit less poppy and maybe even a bit more serious, but that isn’t a bad thing at all.

I was excited to finally get to see this band live and satisfy my inner 12-year-old self.  The band started off with “Michael Praytor, Five Years Later”, a harmony-driven song from their new record.  Then came an oldie, “Jackson Cannery”, an up-beat pop tune from their self-titled first album.   Here I thought Ben Folds Five was going to take off from here and really bring The Wiltern down.  Unfortunately, the only thing that was brought down was the tone of the show.  With the exception of a couple of songs, most of the night was dedicated to their slower material; most was drawn from The Sounds… while the older songs they played were also on the mellower side.  There were a couple covers, including a bit of Dick Dale’s “Miserlou” played on piano as part of the “Theme from Dr. Pyser” medley.  Of course they played their biggest hit “Brick”, where the crowd seemed to really enjoy drunkenly screeching the high falsetto “SHEEEEE’S a brick and I’m drowning slowly” chorus, but Ben Folds Five were skim on the power-piano-pop tunes that had originally drawn me to them. 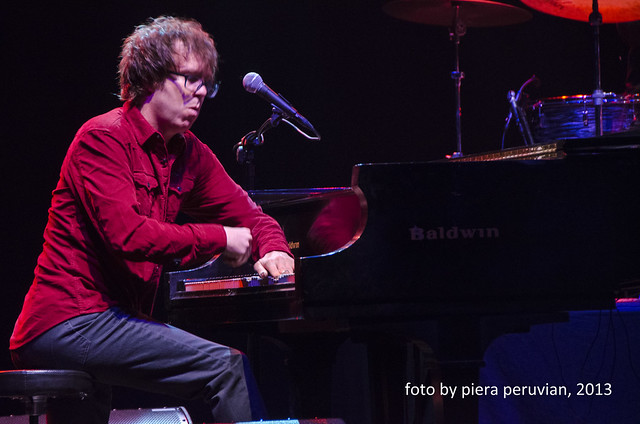 It’s not to say they don’t put on a good show.  Ben Folds, the man, plays piano with the same intensity you imagine yourself playing—if only you knew which key does what on the piano.  Hunched down to reach the keys and mic, assuming a power stance, Ben’s seat keeps him company, however he didn’t seem to take a proper seat during the opening songs.  Despite the time apart, the band as a whole doesn’t appear to have lost a beat.

There were a few anecdotes through the night, particularly hinting that the initial break up wasn’t very amicable.  Ben spoke of how Saturday was the first time they’ve played LA together in 13 years, and how that night was also the first time either of the other two members have met his twin children—who funny enough, are now 13-years-old themselves.  This story was told right before cheekily breaking into “Song for the Dumped” a break-up song where the chorus yells “Give me my money back, you bitch!”.  Another anecdote spoke of how the song “Do It Anyway” from their new album was born.  Ben was introducing the next song at a prior concert which happened to be at The Wiltern, “This isn’t a song I can shake my ass to”, when someone in the pit yelled out “Do it anyway!”, and according to Ben, 3/4th of it was written on the spot onstage at The Wiltern.

Ben Folds Five closed the night with my favourite of all their tunes, the heavy-beat and head-bopping song for the outcast, “Underground” from their-self titled album.  If only the whole night could have consisted of the energy this song brought, it would have been a killer show, it’s just too bad we had to wait till the end to experience it.

Piera's life mimics that of Paddington Bear. Born in the deepest darkest Peru, she soon found herself a stowaway, landing in London sometime thereafter. She now resides in Los Angeles where she likes attending gigs, photographing casually, and wondering about the country when time and finances permit. She also enjoys writing short self-bios... in third person of course.
View all posts by Piera Peruvian →
This entry was posted in Music and tagged 01/26/2013, 2013, Ben Folds, Ben Folds Five, concert, January 26, live, Los Angeles, Review, The Wiltern. Bookmark the permalink.