The Schitzophonics at The Beat Presents @ The Redwood

Posted on January 29, 2013 by Kurt Schellenbach 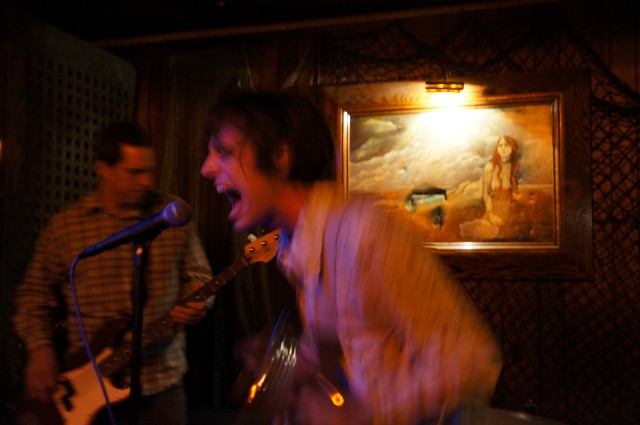 Sometimes you just happen to be in the right place at the right time. The LA Beat’s Sunday matinee show at the Redwood was one of those.

The band known as The Schitzophonics opened up. A 3-piece,  Pat Beers on guitar, Lety Mora on drums and Jim Accardi on the bass.

Pat Beers has managed to turn his Stratocaster into a Jimi Hendrix ouija board. Once the possession begins, the guitar throws itself into a frenzy, which Pat can hardly control.
Like a large cat being strangled, it fights back and bites. Pat holds on for dear life,  tossing Pat about like a rag doll, while managing to pull off some notes and chords. It’s obvious the guitar is playing itself.

I watch to see if his fingers were playing the notes I was hearing and I didn’t see the correlation. Like a mysterious tape loop was being playing from somewhere.

The excellent rhythm sections keeps the supernatural exhibition together, as the shock therapy session continues. Powerful. I love these guys and their energy. I was reminded of the time I saw the Meat Puppets for the first time in 1981. A controlled chaos and a beautiful cacophony. Pat’s body being thrown back and forth, he is not under his own control. Move over rover and let Pat Beers take over, or is that Jimi… or Belphegor. Does it make a difference? Same source, just the guitar demons. The man walks with the devil.

Caution: Do not stand in the front row when they play. That guitar could fly off the strap an impale you. I’m serious.

This entry was posted in Music. Bookmark the permalink.

One Response to The Schitzophonics at The Beat Presents @ The Redwood