`Lance Out Loud’: A Mother’s Tribute 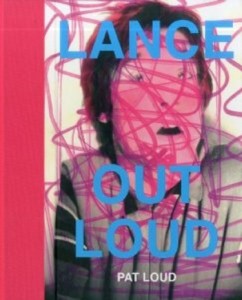 The PBS documentary series “An American Family,” broadcast in 1973, was groundbreaking as well as controversial. Widely considered the first reality show, it documented the Louds, an upper middle-class family living in Santa Barbara, California; their daily activities, from mundane household routines to dramatic marital upheaval, were captured on film for the world to see. Eldest son Lance (considered the first openly gay person on television) made no attempt to hide his flamboyant lifestyle. Amongst today’s reality show-saturated audiences (and with homosexuality far more accepted among mainstream viewers), this would probably elicit no more than a yawn; however, in the early 70’s, it created quite a media sensation.

After “An American Family,” Lance and high school friend, Kristian Hoffman, moved to New York and reformed the rock band they’d started in Santa Barbara, the Mumps (initially called Loud).  Kristian wrote the material and played keyboards, while Lance was front man; Lance described the band as being “too pop for punk, too ‘old school’ for the New Wave.” The Mumps performed at legendary punk club CBGB’s along with Blondie and the Ramones, yet sadly not obtaining the level of success of their peers. The band broke up in 1980. Lance became a journalist, contributing to magazines such as Circus, American Film and Vanity Fair, and had a regular column in The Advocate. He passed away in 2001 at the age of 50 from liver failure caused by Hepatitis C and HIV co-infection.

In a loving tribute to her eldest son, Pat Loud, along with photographer and family friend Christopher Makos, recently published a colorful coffee table book; it is compiled of memoirs written by friends and family, as well as photos culled from Pat’s personal collection and professional sources. The common thread in all of the recollections is that Lance was a force of nature: spontaneous, charming, witty, shunning all things “boring,” kindhearted, generous, and sometimes maddeningly irresponsible. Friends recall Lance beckoning loudly outside windows (“Lee-Sa!”); desert road trips and thrift store hunting; his curiosity and passion for new life experiences, music and film; his love of food and classic L.A. haunts (several references are made to Pat’s excellent home cooking); and a fondness for cats. Unfortunately, his zest for living had a destructive side. One friend remembers, when Lance was on deadline for a magazine assignment, he would begin to panic: “I’m on deadline! I have to do some speed.” The friend adds that Lance “didn’t get a little high; he got a lot high.”

Judging from the photos, Lance’s drug abuse isn’t apparent; even in the later years when he became ill, he appears healthy, tan and muscular. The photos capture him throughout his life, from his 1950’s childhood as an adorable, well-dressed little boy, through his years as a journalist in the `90’s. There are Mumps press photos and live action shots (my favorite is of Lance, in black tank top, sweating and grinning mischievously, leaning against keyboardist Kristian Hoffman; in contrast, Kristian appears subdued and serious, a crisp short-sleeved dress shirt buttoned up to his neck). There are many celebrity photos as well: Lance posing with Arnold Schwarzenegger, Deborah Harry, Gus Van Sant, Dinah Shore, Steven Tyler, etc.

Lance Loud loved his family, and vice versa. In Kristian Hoffman’s piece, in which he writes about befriending Lance in high school, he recalls how affectionate the family was. He describes the difference between his own family’s distance towards one another and the Loud family’s warmth: “I was astounded that, when Lance and his siblings would gather together on the sofa to watch television or listen to records, they actually touched each other . . . here were a group of boisterous, hilarious children who actually enjoyed physical proximity, even intimacy! I had never looked at the world through that lens before. I wanted in!” Family photos portray this great affection, as do the written contributions from his siblings and parents. Mother Pat lovingly describes Lance as “the master of mischief”; sister Michelle describes Lance as someone needing to be looked after, and writes of having been very protective towards her older brother; Kevin admiringly writes of Lance as someone able to “exact pure justice,” relaying a hilarious incident of his brother deflating the ego of a vain and pompous CEO over a business dinner.

Although the stories told by friends are touching and often hilarious, ultimately it is the family photos and memories that make this book truly exceptional. After all, the Louds have the shared experience of being documented on television as a family, their personal matters exposed to the world and criticized in the media, appearing on the cover of Newsweek under the headline “The Broken Family.” No one can really understand what it’s like to have experienced the first “reality show” firsthand, except for the Louds. Pat Loud’s book is a love letter to her late son, but it’s also a fitting tribute to her whole family.

Pat Loud will be signing copies of her book at the “Lance Out Loud” book signing/Mumps musical tribute on June 30, 8:00 P.M., at the Trepany House/Steve Allen Theater. For more information and to purchase tickets, please go to  http://www.tix.com/Event.aspx?EventCode=576476&FirstName=Kevin&CampaignNumber=435.

Carolyn Soyars is a freelance writter/blogger and musician, who performs under the name Carolyn Edwards. She has played with such critically acclaimed bands as 3D Picnic and The Negro Problem, and performs traditional folk music with her husband, Dave Soyars. For more info., see www.carolynsoyars.com for writing, and www.carolynedwards.com for music.
View all posts by Carolyn Soyars →
This entry was posted in Books, Miscellanious, Music and tagged Carolyn Edwards, Carolyn Soyars, documentaries, Lance Loud, Loud Family, No Wave, PBS, punk, reality shows, The Mumps. Bookmark the permalink.