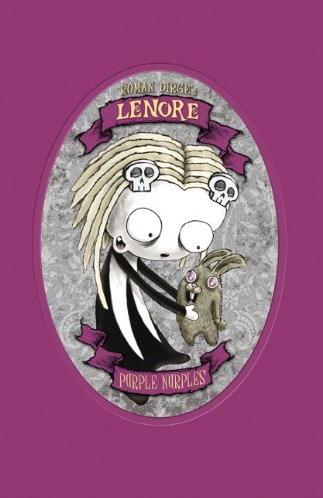 Lenore, the Cute Little Dead Girl is a comic book series created by Roman Dirge in 1998. It follows the weird, gross and funny adventures of a dead girl named Lenore and her creature friends. The sold-out issues have been collected into volumes by Titan Books, so anyone who discovered Lenore a bit late can now read them in full-color, nice-smelling, hardback books. The latest volume, No. 5, is Lenore: Purple Nurples, which contains issues 4 through 7, but lists them as chapters.

The comic is crudely but cleverly drawn and the lettering is crooked and wavering; I like Dirge’s tendency to draw mouths as a tiny hole towards the back of the face, as on the cover (at left). At first glance, I thought the nose was her mouth and that she had a blank expression.

Lenore lives in a haunted house with Ragamuffin (a vampire who was turned into a rag doll) and Pooty (a bucket-headed demon from “Heck” with a trident), and has a neighbor named Taxidermy (a murderous – at least in “King for a Day”, Issue 7/Chapter Four – man in a suit with a taxidermied deer head). Lenore generally plagues the level-headed Ragamuffin with bizarre ideas like bringing in weasels to do the cooking or showing a fly the best day of its life before it dies. There are some major laughs here and there, but mainly a lot of silly giggles. The humor is at its best when it’s fast-paced and off-the-wall, like in Issue 7, when the story is interrupted by Lenore suddenly becoming incoherent because her brain has leapt out of her head. It happens again later and we see the brain (which has hair and eyeballs) come running from the bathroom before it climbs back in. Then Taxidermy says, “I’m getting a staple gun.”

Issue 4/Chapter One introduces the Creeping Creepig, which is a floating zombie pig that kills anyone guilty of “pork gluttony”.  (Will have to warn my dad.) My favorite part is when Lenore eats the talking pork chop that was attempting to warn her about it. (Ragamuffin: “Seriously? That was just talking to you a minute ago.”) The joke could have ended there, but the pork chop continues to talk inside her stomach, wailing about being digested. Then she goes to the bathroom and we hear it crying out, “Arghhhh! I’m poop in a toilet, aren’t I?” on and on, until she flushes and comes out saying, “Let us never speak of this.”

Another good moment is in Issue 6/Chapter Three, “The Dweller in the Fridge”, when a terrified Pooty keeps murdering clowns that keep appearing at the house, and we learn later that Lenore keeps re-ordering them for her birthday and wondering why they won’t show up. Don’t expect any of it to make much sense, just enjoy the weirdness and go along for the ride.

Simone Snaith writes young adult and fantasy novels, and sings in the band Turning Violet. A fan of scifi, fantasy, the supernatural and most things from the '80s, she enjoys reviewing music, books and movies. You can read about her own books at simonesnaith.com.
View all posts by Simone Snaith →
This entry was posted in Books, Miscellanious and tagged comics, graphic novels, lenore, macabre, roman dirge. Bookmark the permalink.