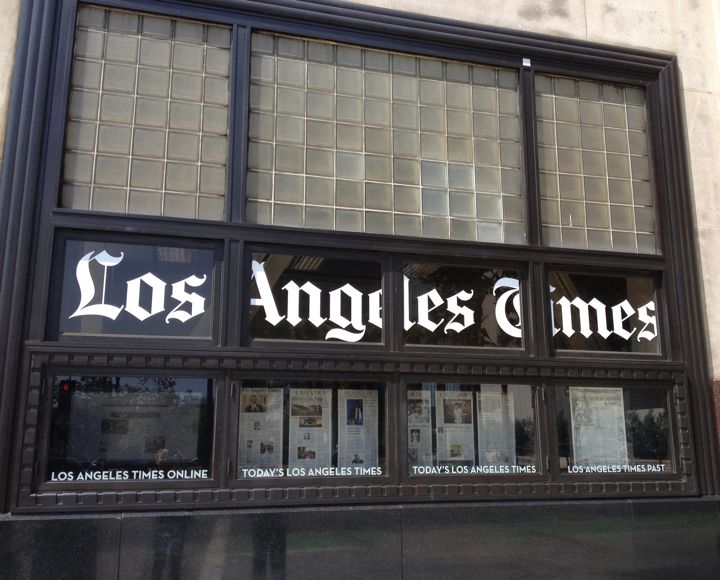 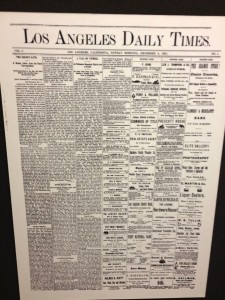 The first Los Angeles Times was published on Sunday December 4, 1881. There are no photos because there was no ability to print them. (photo by Nikki Kreuzer)

The Times they are a-changin’, wrote folk balladeer Bob Dylan, back in 1964. Of course it’s obviously true. Nothing stays the same. The Los Angeles we know today, around which we’re fairly sure the world revolves, is a fairly recent creation. With a current citywide population of about 4 million and a county population of around 10 million, we’ve grown substantially since the dusty, cowpoke frontier days of our not too distant past. When our city’s first newspaper, the 4-page Los Angeles Star (2 pages in English and 2 pages in Spanish) debuted in 1851, there were only about 1,600 residents. By the time the Los Angeles Times published its first, equally sparse, edition in December 1881, our city had a whopping 11,000 people living here. Compare that with New York City’s population of 1.2 million that same year. Since there was no electricity in L.A. at that time, the paper’s first news press was powered by water from the still uncemented Los Angeles River. Our original Los Angeles Times was pretty much a small town paper whose readership grew linearly as the city itself expanded. And this paper has been our mirror, literally and figuratively; reflecting our triumphs, our defeats, exposing our hidden truths and illuminating the best and the worst of our humanity. Its yellowed back copies hold the fragile ghosts of our long forgotten past. 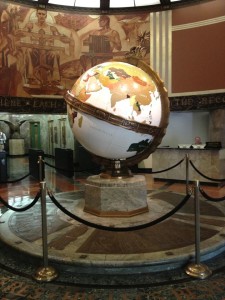 We’ve come a long way, Baby, and so has the Los Angeles Times. The paper now has an average daily readership of between 1.5- 2.6 million. Recent changes in how the world delivers news is dramatically changing the landscape of newspapers nationwide and has caused a slip in the circulation of the traditional newsprint format. What has long been a solid institution is caught in a steady stream of evolution and flux. Will advertising continue to support our beloved printed city newspapers, or will the tide of digital change eventually sweep them away to the land of yesterday’s memories? Although the Los Angeles Times is the 4th largest circulating newspaper in the country, trumped only by The Wall Street Journal, The New York Times and USA Today, the hardcopy sales are only about half of its peak of 1.2 million papers sold a day in 1990. 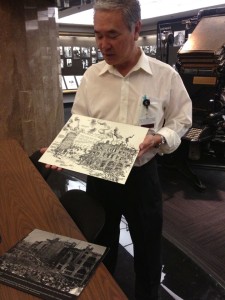 So after those sombre, but realistic statistics, it is with a certain glee that I report that the Los Angeles Times is apparently the only newspaper left in the nation to make tours of its historic editorial newsroom and of its printing plant available to the general public. The absolutely fascinating L.A. Times Editorial Tour, led by Darrell Kunitomi, an extremely knowledgable 37-year veteran employee of the paper, starts in the gorgeous 1935 Art Deco Globe Lobby located at the 1st Street entrance of the Times building. There Darrell, who has witnessed dramatic changes in the newspaper industry since his start in the mid-70’s, uses photo displays to tell each tour group about the history of the Times. 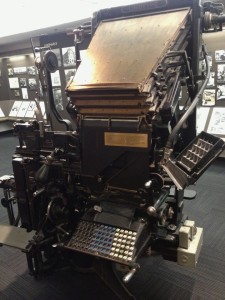 We learn about the paper’s humble beginnings and about a murderous 1910 bomb set off by union organizers that killed 20 of the paper’s employees, after which we see memorial plaques for four other Times reporters who have lost their lives, each while covering a story. There is a 1963 photo of Dorothy Townsend, the first woman staff writer to break free of the fluff of the Women’s Pages and report actual stories in the city news room. And we get to see an honest to goodness Linotype machine, a typesetting machine used by the L.A. Times from 1893-1974 which replaced slow handset type and took the paper up to the electronic age of newspaper layout. 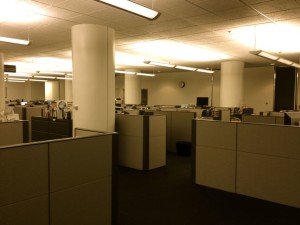 With Darrell at the helm, the tour proceeds to the editorial newsroom where we walk though open areas of cubicles used by the various Los Angeles Times reporters. People in our tour group become almost groupie-like when meeting their favorite Times writers such as columnist Sandy Banks, food editor Russ Parsons and news feature reporter Bob Pool. 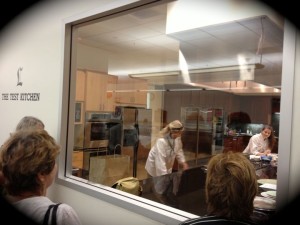 Others become ecstatic at looking through the large glass windows of the Los Angeles Times Test Kitchen where we watch interns create food from recipes that will soon be running in the Saturday Food section. We also see the Photo Room of the Times which once held 10 bustling photography darkrooms but now merely holds desks for digital editing. 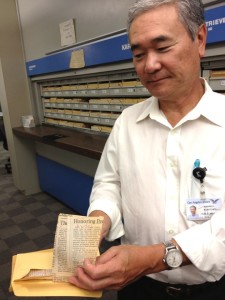 Entering the archives, it is surprising to find that they are still old-fashioned. Metal file cabinets contain ten million paper clippings, organized by topic, dating from the 1970′s to 1987, when the digital databases began to be used. Most everything before that was microfilmed. This first part of our tour is both historically and culturally interesting and lasts just over an hour. Next our tour convenes to the L.A. Times cafeteria for a brief lunch break. This downstairs lunchroom once held the large printing presses for the paper. The rows of windows along the far wall were loading docks until 1990 when the printing facility moved to its own building, the Olympic Printing Plant, located on 8th Street near Alameda, which is to be our tour’s next stop.

A view into the Olympic Printing Plant (photo by Nikki Kreuzer)

The Olympic Printing Plant is mesmerizing and somewhat overwhelming. It is a factory at work, pure and simple. The strong, delicious, dark smell of ink and the loud roar of the machines add excitement. This is life happening – the news being printed. Darrell listens to the buzz of the machines and estimates that right now they are producing about 20 newspapers per second, folded, cut, and ready to read. We enter the plant, passing laser guided robots built specifically to lift large rolls of newsprint. 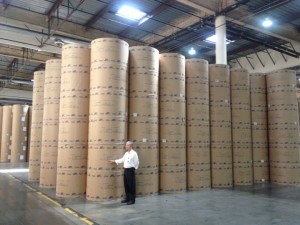 Darrell stands next to massive rolls of newsprint. Each weighs about 1500 pounds (photo by Nikki Kreuzer)

As we enter a cavernous warehouse and strive to hear above the din, our jaws drop in awe at the mountainous rolls of newsprint stacked to nearly the ceiling. Each weighs about 1500 pounds and contains about 6 miles of newsprint. Darrell tells us that this plant goes through about 300 rolls of this paper every 24-hours. On average 1,000 gallons of soy ink are used per day to print our news. Our group breaks into small talks about recycling as we try to wrap our minds around how much paper and ink is being consumed. 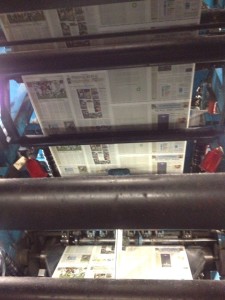 Next we take a large freight elevator up to a room filled with six incredibly massive printers. What we see is pretty much automated, with a few rare humans seen checking quality control. Although this plant employs about 200 workers, it feels empty like a ghost town, save for the steady, fast paced machines laboriously printing a singular section of the upcoming Sunday Los Angeles Times and others printing the West Coast copies of both the Wall Street Journal and the New York Times to save obvious transportation costs. Above our heads flip page after printed page, almost too fast for the eye to get a careful view. It is dreamlike and somewhat mysterious, the constant flow of this river of newspaper. Perhaps it is the heady smell of the ink or maybe it is the roar of the presses, but there is a surreal quality about the creation of this paper that cannot be denied. But of course this is Los Angeles, and if one thing is a given, it is that nothing is as it seems. As the Times reflects our city, our city reflects the Times. Our city’s relationship with its paper is an eternal funhouse mirror; a symbiotic reflection of our cultural past, present and future. Look deep into the mirror and you cannot tell where one image ends and the other begins. Taking this magical tour is a way of looking deep into the soul of Los Angeles; our heart, our fears, our nightmares and our dreams. 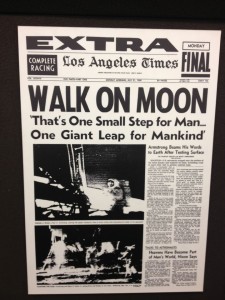 The Los Angeles Times Editorial Tour and Olympic Printing Plant Tour: Free of charge. By reservation only. Contact Darrell Kunitomi at (213) 237-3178 or darrell.kunitomi@latimes.com.

Nikki Kreuzer has been a Los Angeles resident for over 30 years. When not working her day job in the film & TV industry, she spends her time over many obsessions, mainly music, art and exploring & photographing the oddities of the city she adores. So far she has written 110 Offbeat L.A. articles, published at the Los Angeles Beat. As a journalist she contributes regularly to LA Weekly, Blurred Culture and The Los Angeles Beat and has also been published by Oddee.com, Twist Magazine, Strobe and Not For Hire. Nikki is also a mosaic artist, radio DJ and published photographer. Her photography has been featured in exhibit at the Museum of Neon Art, in print at the LA Weekly and is part of an upcoming show at the Neutra Museum in Los Angeles. She has recorded with the band Nikki & Candy as bassist, vocalist and songwriter, directing and appearing in the 'Sunshine Sunshine Santa Claus' music video for the band. She co-hosts the monthly radio show Bubblegum & Other Delights on Dublab.com. Her acting credits include a recent role in the ABC-TV show 'For The People', 'Incident at Guilt Ridge', 'Two and a Half Men', the film 'Minority Report' and 'Offbeat L.A.', a web series, written and hosted by Nikki Kreuzer. Her writing, radio and video portfolio can be found at OffbeatLA.com, her photography work @Lunabeat on Instagram and her music history posts @NikkiKreuzer on Twitter. Find Nikki & Candy music on iTunes, Amazon or at NikkiandCandy.com.
View all posts by Nikki Kreuzer →
This entry was posted in Attractions, Miscellanious, Offbeat LA and tagged L.A. Times Tour, Los Angeles Times Tour, Nicole Kreuzer, Nikki Kreuzer, Offbeat L.A., Offbeat LA. Bookmark the permalink.

7 Responses to Offbeat L.A.: Hot Off the Presses- The Los Angeles Times Tour