Posted on September 5, 2013 by Elise Thompson 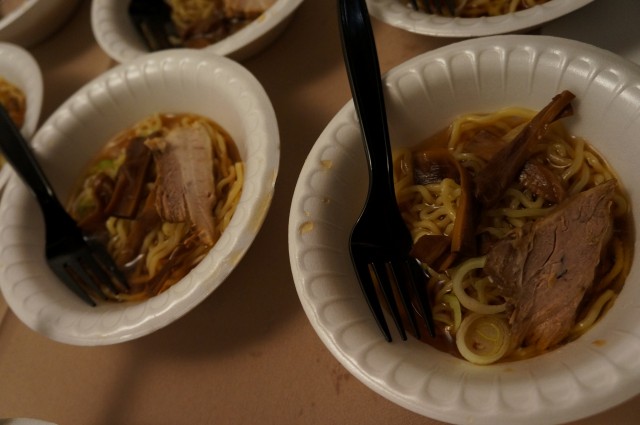 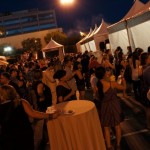 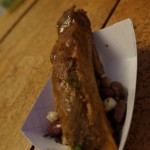 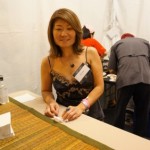 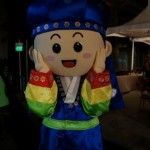 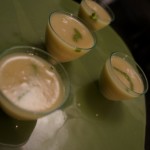 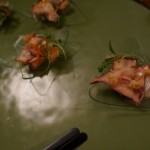 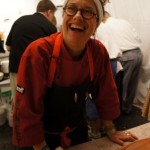 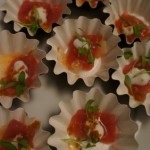 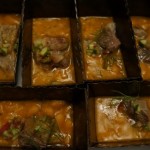 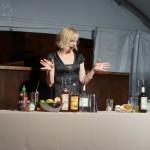 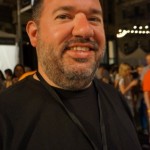 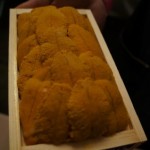 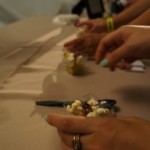 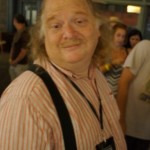 A bemused Mr Gold at The Taste. Photo by Elise Thompson. 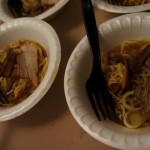 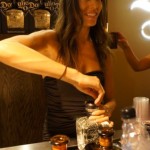 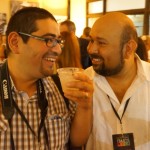 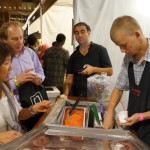 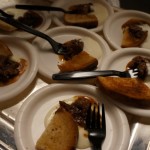 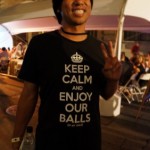 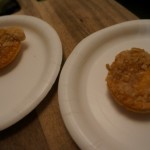 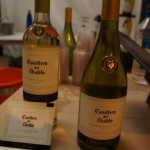 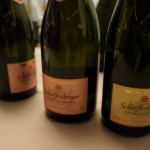 Saturday night’s Flavors of LA was hosted by the much-lauded food critic, Jonathan Gold, and the man behind Father’s Office, Sang Yoon. It was fairly evident which restaurants were chosen by Jonathan Gold, as certain dishes were tellingly complex and intense. They really made your taste buds sit up and take notice. Chefs also took more risks at this event than they did at the others.

The first taste of the evening was one of my favorites, fried chicken with a red wine glaze, pickled Fresno chili and parmesan from Superba Snack Bar. 9021 Pho offered a choice of Vietnamese Charbroiled Pork or Chicken that was nicely balanced.

In a more Goldesque vein, Gottsui surprised me with their okonomiyaki, which they described as “Japanese pizza”. It was comprised of a layer of cabbage, a whole bunch of deliciousness heaped on top, covered with sauce, and sprinkled with nori and bonito flakes. T.H.N. Ramen was served cold, topped with pork and mushrooms. Something a little fishy was going on…anchovies? Then angels sang and the clouds parted because Inn at the Seventh Ray had uni! They served it with a corn chawanmushi, which was like a custard that matched the uni’s creamy consistency. Truffle salt, yuzu, and tamari gel rounded out the flavors while popcorn added that little crunch that Top Chef judges seem to think is so important. I don’t need the crunch, so I picked off the popcorn and enjoyed a bowl of creamy rich fish sex.

There was an octopus ceviche with crispy fig rind, spiced lamb belly croquettes from Waterloo and City, and spicy Dandan noodles from Lukshon. Doma kicked out the jams with both a ceviche and lamb braise. The Blvd. at the Beverley Wilshire served a nice braised oxtail with smoked potato foam and horseradish. One of the standout desserts was the Peach Crisp with Brown Sugar Crumble from Blvd 16. Bulgari Gelateria tempted us with salted chocolate gelato and a blood orange granita that was really good with a few shots of my tequila poured over.

At some point I discovered the Don Julio bar around the same time I ran into John Colletti of Socialdomain.com We bopped around, chatting with Jonathan Gold, Latino Foodies, and Nguyen Tran of Starry Kitchen, who is my new best friend. I’m not a wine drinker, but John liked the Scarffenberger and the Concha y Toro Gran Reserva. Bob Lee later described it a “a big, bold steak of a wine.”

Another successful event, as one could only expect from a trio like the LA Times, Jonathan Gold and Sang Yoon.

Born and raised in the great city of Los Angeles, this food, culture and music-loving punk rock angeleno wants to turn you on to all that is funky, delicious and weird in the city. While Elise holds down the fort, her adventurous alter ego Kiki Maraschino is known to roam the country in search of catfish.
View all posts by Elise Thompson →
This entry was posted in Cocktails, Beer, Wine & Weed, Events, Food. Bookmark the permalink.