Offbeat L.A. Goes on a Video Journey to the Los Angeles County Fair

Posted on September 5, 2013 by Nikki Kreuzer

Join Offbeat L.A. hostess with the mostest, Nikki Kreuzer, as I explore some of the more eclectic parts of the Los Angeles County Fair in this 5 minute video. I’ve been to equally strange fairs in some of our neighboring counties and knew it was time to document our own. Check out the Offbeat L.A. article about this summer’s Orange County Fair here: Surreality at the OC Fair 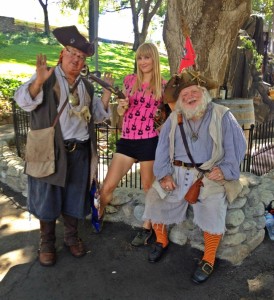 The author’s pistol is aimed in the Pirate-themed area of the L.A. County Fair (photo by Candy Lynn)

The Los Angeles County Fair is being held this year from August 29- September 30th 2013, so you still have time to save up your stamina and your calorie count. Don’t skimp on the fried dough!

Nikki Kreuzer has been a Los Angeles resident for over 30 years. When not working her day job in the film & TV industry, she spends her time over many obsessions, mainly music, art and exploring & photographing the oddities of the city she adores. So far she has written 110 Offbeat L.A. articles, published at the Los Angeles Beat. As a journalist she contributes regularly to LA Weekly, Blurred Culture and The Los Angeles Beat and has also been published by Oddee.com, Twist Magazine, Strobe and Not For Hire. Nikki is also a mosaic artist, radio DJ and published photographer. Her photography has been featured in exhibit at the Museum of Neon Art, in print at the LA Weekly and is part of an upcoming show at the Neutra Museum in Los Angeles. She has recorded with the band Nikki & Candy as bassist, vocalist and songwriter, directing and appearing in the 'Sunshine Sunshine Santa Claus' music video for the band. She co-hosts the monthly radio show Bubblegum & Other Delights on Dublab.com. Her acting credits include a recent role in the ABC-TV show 'For The People', 'Incident at Guilt Ridge', 'Two and a Half Men', the film 'Minority Report' and 'Offbeat L.A.', a web series, written and hosted by Nikki Kreuzer. Her writing, radio and video portfolio can be found at OffbeatLA.com, her photography work @Lunabeat on Instagram and her music history posts @NikkiKreuzer on Twitter. Find Nikki & Candy music on iTunes, Amazon or at NikkiandCandy.com.
View all posts by Nikki Kreuzer →
This entry was posted in Attractions, Events, Food, Miscellanious, Offbeat LA, Upcoming Events, Videos and tagged Los Angeles County Fair, Nicole Kreuzer, Nikki Kreuzer, Offbeat L.A., Offbeat LA. Bookmark the permalink.