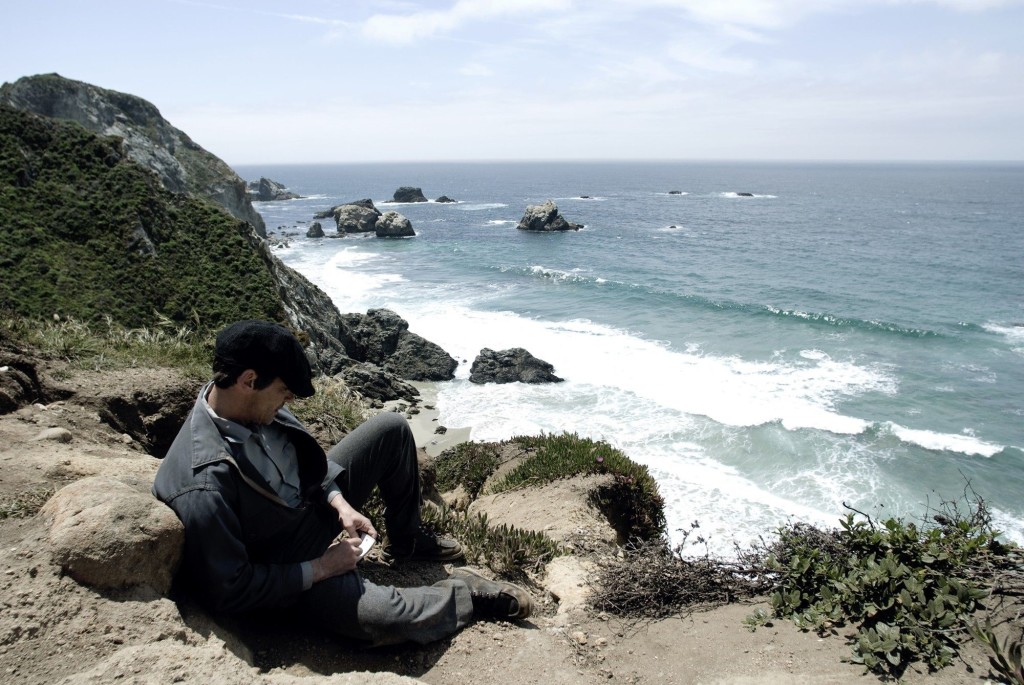 As a film producer, Orian Williams’ credits include Shadow Of The Vampire (2000) and the Joy Division biopic, Control (2007).  His latest is Big Sur, the film based on Jack Kerouac’s novel of his time spent in the coastal California town. It opened this weekend nationwide.

Tell me about Big Sur. How did you come to make this project?
I worked on the documentary One Fast Move Or I’m Gone: Kerouac’s Big Sur and thought the idea needed to be taken to the next level. I wanted to explore more emotion in the story, so the estate and I took it to the next level–into feature form.

Are you a pretty big fan of Kerouac and the Beats in general?
I am not so much a fan of the Beats as I am the human mind, and what it will do in the midst of a decade where many conservative ideas are being pushed and someone is going against it with poetry and prose. I love the aesthetic of it all, and the time period.

The cinematography is like nothing I’ve ever seen.  It’s very dreamlike/ethereal. Why did you chose to shoot this way?
Our director Michael Polish, along with our DP David Mullen, had his eye on the spot (location), and along with Kerouac’s words, was able to bring it all together to get us to the way the film finally looked. You need not force the camera to do much more than just capture the space and time, and with our great actors and hard-working crew it looks very natural.

You shot at the locations in which Kerouac, Ferlinghetti, etc. lived… how did the energy from the locations influence the performances?
We had no option but to shoot in Big Sur. Once you step foot on this fertile, ancient ground, you get a sensation that’s hard to explain.

We were lucky to have the cooperation of the residents in Big Sur. The actors, myself, and the rest of the crew really felt like we wanted our own experience, and to capture that on film was the best plan to turn our script into a movie. Just being there gave rise to emotion that was conjured and once we wrapped, forgotten, but the evidence is in the frame.

As a producer you tend to be drawn to projects that involve troubled geniuses (Control, Big Sur). Are these the types of stories that generally resonate for you?
I like many types of projects, but I seem to have more of an emotional pull towards stories like Big Sur and Control– films about real people, in different times. I am drawn to the aesthetic of a person I’m inspired by. Kerouac and Ian Curtis both inspired and lived short lives and both were barely captured on film. So, these films make it possible to bring them back to life for a couple of hours and try to live with them for a bit.

What’s next for you?
I’m working on several things–a film about Kit Lambert, manager of  The Who. It’s called Kit.  I’m also working on Wonderland Avenue written by Danny Sugerman and many, many more.

Big Sur is currently showing at the Sundance Cinemas in West Hollywood. Today, November 3, there will be a Q&A with Michael Polish, Jean Marc Barr and Kate Bosworth immediately following the 4:15 pm showing.

Michelle Nati is a pop culture priestess who hails from Rochester, New York. She is a freelance graphic designer, writer/copy editor (formerly Caffeine Magazine), researcher (Co-Conspiracy Entertainment) and lives with her poodle-terrier mix in Northeast LA. Check her out at www.michellenati.com.
View all posts by Michelle Nati →
This entry was posted in Miscellanious. Bookmark the permalink.