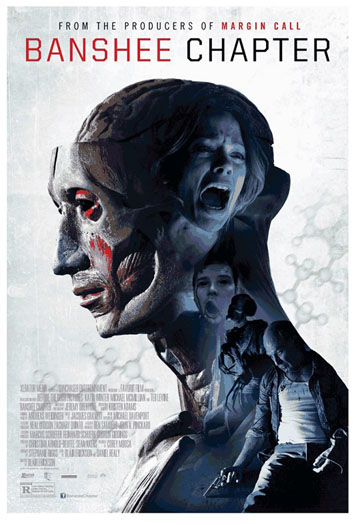 Banshee Chapter, written and directed by Blair Erickson, draws from the real life MKUltra experiments by the CIA, and H.P. Lovecraft’s story “From Beyond”. While MKUltra is defined in the movie, there is only one joking reference to “From Beyond”,  and I found the movie nearly impossible to understand before I looked up the story, which is about a device that allows hostile beings from another dimension to enter ours. (Note: the 1986 movie version seems to be wildly different from the actual story so that’s probably not a good reference.)

Even after understanding the connection to “From Beyond”, I was left with a lot of questions at the end of Banshee Chapter. The movie is still enjoyably creepy however, with many jump-in-your-seat moments, and it boasts a great performance by Ted Levine as an obvious Hunter S. Thompson character.

The story revolves around web journalist Anne’s (Katia Winter) investigation into the disappearance of her writer friend James, who was last seen being filmed taking Dimethyltryptamine (DMT), after doing research on MKUltra and learning that test subjects given DMT all claimed to be visited by the same entity. In footage Anne watches, James explains that the subjects all called the entities the same thing, and that is what “gives the chapter its name”. This is one of the things I still find confusing – the tests are never referred to again as chapters, and no one in the film describes the entities as banshees, not even in the frightening clips of the tests from the 60s. Nor do they appear to resemble banshees or wail when they show up. Shouldn’t there be some wailing?

In the video of James’s DMT trip, a creepy signal starts up from his radio, and a mesmerized James announces that something is coming – a recurring theme in the movie. The video breaks up as a figure appears at the window, then we later see just a glimpse of James’s face – now distorted and bleeding from the eyes and mouth. Anne figures out that the radio signal is broadcast from deep in the desert and that James got his DMT from notorious druggie and author Thomas Blackburn (Ted Levine). She catches a glimpse of some creature in the desert while listening to the signal, and then later she, Thomas and his chemist friend Callie are attacked by something we never see, after taking the DMT.

This leads to Anne and Thomas working together to figure out what is going on, and there is a good scene of the two of them in Thomas’s classic car in the desert – a bit Fear and Loathing – in which Levine is just perfect as someone who is baked and used to weirdness but who’s in way over his head. But it’s also around this point that both characters suddenly seem to know what these creatures or entities are, while I was completely at a loss. Here is where knowledge of “From Beyond” seems necessary to keep up with them, and even then, the how of it all requires a lot of connecting the dots and guesswork. The connection between the radio signal and the drug is still a little shaky for me.

Over all though, Banshee Chapter is a chilling ride with excellent music – especially the song over the credits – and clever camera work. Its blending of truth and fiction might just lead you to several interesting things on the internet as well, including this little video on DMT, which reveals why it’s actually a good fit for a modern take on the Lovecraft story.

Simone Snaith writes young adult and fantasy novels, and sings in the band Turning Violet. A fan of scifi, fantasy, the supernatural and most things from the '80s, she enjoys reviewing music, books and movies. You can read about her own books at simonesnaith.com.
View all posts by Simone Snaith →
This entry was posted in Miscellanious, Movies and tagged alternate dimensions, banshee chapter, DMT, from beyond, H. P. Lovecraft, MKUltra, psychedelic drugs. Bookmark the permalink.