Le Week-End is a story of love and commitment, where Nick Burrows played by Jim Broadbent and Meg Burrows played by Lindsay Duncan, desire to inhabit their past and rekindle their youthful experience of love by returning to Paris for their 30th wedding anniversary. Conversely, the movie ultimately revolves around their reflections on mortal gloom and their life shaking reappraisal of themselves, an attribute of growing older. Their ideals and expectations of what love and devotion should be are devoured by mortality’s tightening grip.

The creators of Venus, director Roger Michell and writer Hanif Kureishi, have a story not often romanced or embraced in Hollywood circles, because of the brutal depth pondered in this film and the convulsive nature of real relationships that drives the concept in this story. Nick, who is lost in the relationship with Meg and Meg is desperately trying to escape the construct they created together in a marriage bathed in monotony of decades. As in all relationships there are the ecstatic revelrous moments found in union and then there’s the contempt and loathing that can arrive with stagnate intrusive devotion of one partner on the other. The story flits and flutters around this theme for most of the film, seeking resolution and insight.

As the movie played out on the screen before me a strong reference came to mind. I thought of Woody Allen’s Interiors. Meg’s character, like E. G. Marshall’s Author, is bored, wanting to shake things up to create a new life and Nick’s character is Geraldine Page’s Eve holding to the past with its nostalgia and security. Meg demands something grand memorable and Nick wants to hold on to the meager memories of the past. Of course, this is set in Paris, so there’s the sights and sound of one of the most amazing cities on earth as a backdrop. Meg drags Nick into experiencing life in the moment. They spend the weekend in a Hotel they can’t possibly afford. They dine and drink in a manner of those who are well-heeled. As the story progresses you begin to witness the fantasy unravel, when Meg arranges, without Nick’s knowledge, to dine and ditch. These moments echo the carefree nature of youthful pranks, while exposing how skint and perilous their financial situation is. This does not diminish the moments of romance as they publicly embrace and passionately kiss once escaping the crime scene. This is also the moment that Morgan, played by Jeff Goldblum, appears as an old friend of Nick’s. Jeff Goldblum’s character, Morgan, is very reminiscent of Maureen Stapleton’s Pearl in Interiors. Morgan as a displaced New Yorker, now living in Paris. He adds immeasurable energy to the story and signals the closing of the film. Morgan represents Nick’s youth and inadvertently will defines Nick’s future. This reunion offers the opportunity to invite Nick and Meg to his party.

The plot from here offers the ultimate breakdown of Nick, where he accuses Meg of cheating with another man. This presents a deal breaker moment for Meg where she feels betrayed and dishonored by his comments. Despite the conflict between them they attend Morgan’s party. The party brought out all the caustic negativity and resentment their years habitation together has breed. At the party Morgan and Nick have a moment to reminisce. This reveals Morgan’s anxiety with his new marriage that is opening a new chapter in his life after his divorce. Morgan admires Nick and praises him for his integrity and intellectual capacity. Nick braces himself at this moment, putting on a brave face regarding the dissolution of his marriage and downfall of his finances for Morgan. The final transition takes place at the dinner scene, where Morgan toasts Nick for all of his virtues. This is the climax and the defining moment of Nick’s appraisal of his life, which he shares with brutal candor to a stunned group dinner guest. This cathartic, revelatory and spontaneous act of becoming transparent is the very process that wins back the respect and admiration of Meg. This shard of brilliant truth brings Nick and Meg closer than they have been in decades. At this point Le Week-End diverges in tone from Woody Allen’s Interiors. The topography of the story transitions into a far more positive ending, and substantially less bleak than what Interiors offered. Nick and Meg’s grow to accept and forgive for one another in this life affirming, charming and well written feature: where love and romance can find a rebirth while locked in this mortal coil. 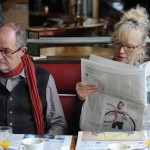 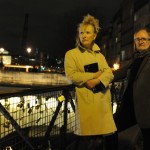 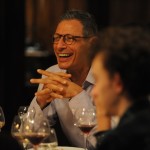 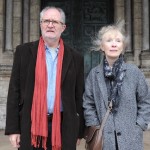 Billy Bennight is a writer, photographer and wardrobe stylist with expertise and years of experience in these disciplines. His musical youth started as a Punk Rocker and has expanded into exploring many genres of music, with an keen interest in art, fashion, photography and writing. He shoots celebrity events and red carpets for The Photo Access and ZUMA Press. He is a member of the Los Angeles Art Association. His images have been published in The Los Angeles Times, People Magazine, Wall Street Journal and Vanity Fair. He's very engaged in life. You can follow him on his Facebook page at: www.facebook.com/billybennightartist and on Instagram and Twitter @billybennight
View all posts by Billy Bennight →
This entry was posted in Movies and tagged Academy Awards, Another Year. British, Billy Bennight, cinema, Comedy, Drama, Dramedy, English, Feature, French, Iris, Mansfield Park, Movie, Nomination, Notting Hill, Oscar, Oscar Nominated, Peter O'Toole, Review, Script, The Buddha of Suburbia, The Mother, Topsy-Turvy, Under the Tuscan Sun, Venue, Venus. Bookmark the permalink.