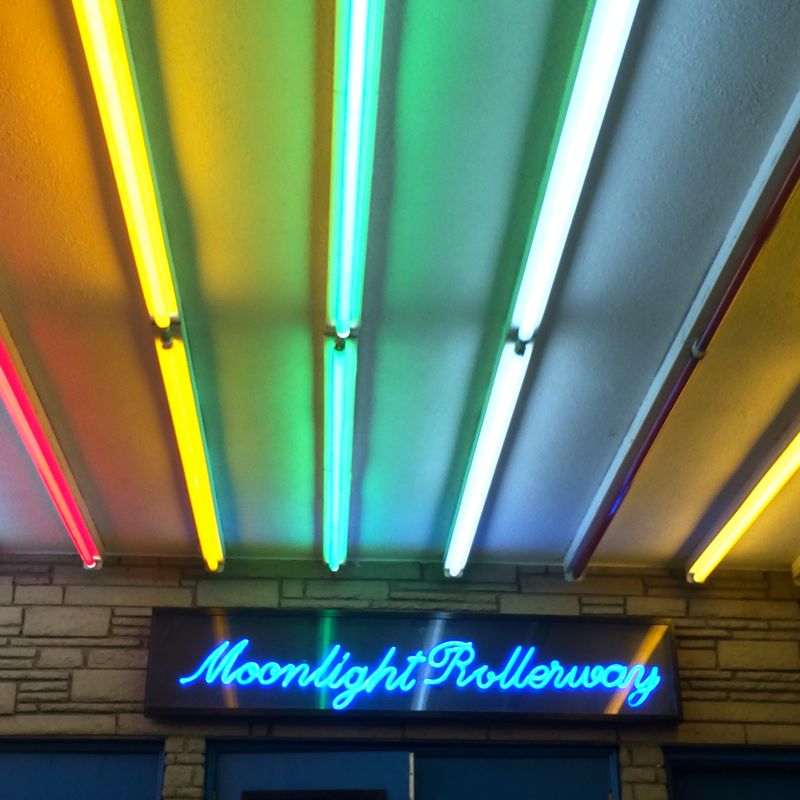 The vintage neon of Moonlight Rollerway (photo by Nikki Kreuzer) 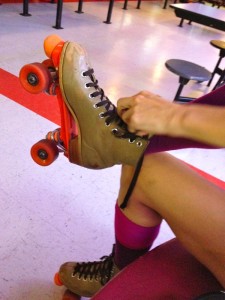 The author laces up (photo by Vitta Quinn)

I have always found something synonymous about roller skating and Southern California. Maybe it’s because so much of the last big skating trend of the late ’70s to early ’80s was immortalized on film & TV taking place here. Maybe it’s because of its distant connection to skateboarding, very much a Southern California tradition. Or maybe it’s just another stereotype, created by my dream-filled childhood mind, snowed in on the East Coast and fantasizing about blue skies, sequin hot pants, the ever shining California sun and freedom…

Although the reality of inside rollerskating fades dimmer and dimmer as the few remaining rinks, such as World on Wheels, sadly shutter their doors, there is hope for someone looking for a blast to the retro past. In fact, there are only a few rinks left in all of L.A. County, but we are lucky to have a particularly great one right in Glendale. 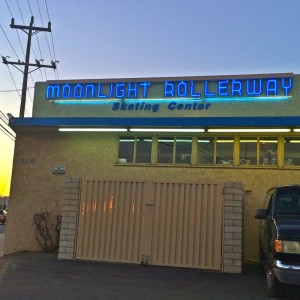 Tucked away in a desolate and barren stretch of San Fernando Road, across from lonely train tracks and surrounded by unremarkable warehouses, is the very remarkable Moonlight Rollerway. Its 1960s neon beckons to adventure seekers and those already in the know. This is a place where time stands frozen and where adrenaline and laughter lurk behind closed doors. Originally opened in 1950, when post WW2 optimism created a first roller rink boom, this was one of a chain called Harry’s Roller Rinks. Renamed Moonlight in the ’60s by the next set of owners who ran a Pasadena rink with the same name, they left the interior much as the day it was opened, right down to the original tounge-in-groove wooden skate floor which can still be found here 64 years later. 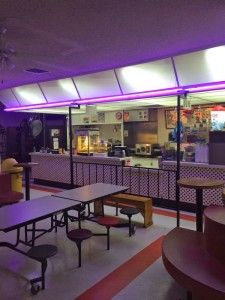 In fact, although the carpet has been redone in a playful 1980s graffiti print that has thankfully now reached the point of vintage itself, the interior is decidedly mid-century. The glittering mirrored disco ball above the rink itself is even original to 1950. Its multitude of tiny mirrors reflected both the coming of the disco era and its passing. The retro looking cutout signs along the top of the walls are mid-century as well. 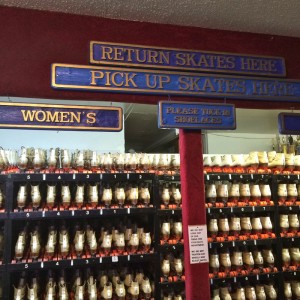 The current owner, Dominic Cangelosi, bought Moonlight Rollerway in 1985, but has been playing the vintage Hammond B3 organ there since the 1960s. In fact he still plays on Tuesday nights for the rink’s weekly Old Time Organ Night in which time unfolds at a much slower pace, really sending skaters into a time warp. 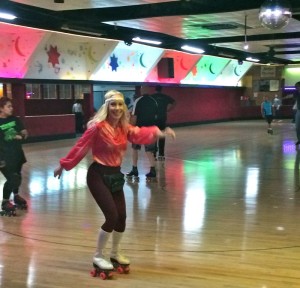 The skate floor at Moonlight Rollerway (photo by Nikki Kreuzer)

Wednesday evenings are Rainbow Skate, a night where all sexual orientations are celebrated and the thumping disco beat keeps the energy up. Mondays are strictly for adults, with a combination of great ’70s and ’80s tunes with some unfortunate newer dance music in the mix. I have to admit that when the DJ played Foreigner’s Urgent I was transported back to the time of my last major flirtation with rollerskating at Buffalo, NY’s USA Roller Rink. My best friend’s mother would often drop a few of us at that rink on a snowy afternoon and we would clip on our feather roach clips, combs in back pockets of our designer jeans and clumsily try to get the boys with Scott Baio haircuts to notice us. 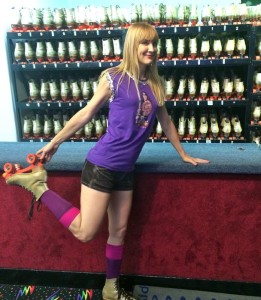 The author at the skate rental counter (photo by Vitta Quinn)

At Moonlight you can either bring your own skates or rent a pair from them. It couldn’t be easier. So take a well-deserved break from your normal routine and get out on the skate floor. The skill is like riding a bike and will immediately come back to you, transporting you into the echoes of your former self. And if you’ve never tried rink skating, then what are you waiting for?

Nikki Kreuzer has been a Los Angeles resident for over 30 years. When not working her day job in the film & TV industry, she spends her time over many obsessions, mainly music, art and exploring & photographing the oddities of the city she adores. So far she has written 110 Offbeat L.A. articles, published at the Los Angeles Beat. As a journalist she contributes regularly to LA Weekly, Blurred Culture and The Los Angeles Beat and has also been published by Oddee.com, Twist Magazine, Strobe and Not For Hire. Nikki is also a mosaic artist, radio DJ and published photographer. Her photography has been featured in exhibit at the Museum of Neon Art, in print at the LA Weekly and is part of an upcoming show at the Neutra Museum in Los Angeles. She has recorded with the band Nikki & Candy as bassist, vocalist and songwriter, directing and appearing in the 'Sunshine Sunshine Santa Claus' music video for the band. She co-hosts the monthly radio show Bubblegum & Other Delights on Dublab.com. Her acting credits include a recent role in the ABC-TV show 'For The People', 'Incident at Guilt Ridge', 'Two and a Half Men', the film 'Minority Report' and 'Offbeat L.A.', a web series, written and hosted by Nikki Kreuzer. Her writing, radio and video portfolio can be found at OffbeatLA.com, her photography work @Lunabeat on Instagram and her music history posts @NikkiKreuzer on Twitter. Find Nikki & Candy music on iTunes, Amazon or at NikkiandCandy.com.
View all posts by Nikki Kreuzer →
This entry was posted in Attractions, Miscellanious, Offbeat LA and tagged Glendale, Moonlight Rollerway, Nicole Kreuzer, Nikki Kreuzer, Offbeat L.A., Offbeat LA, Roller Skating. Bookmark the permalink.