“It’s boring sometimes, but it’s still fun. I keep busy with so many things at once that I forget sometimes where I leave stuff! My book ( a history on Art) is almost finished, and of course there’s the garden. I’ve been growing onions and they’re quite nice to look at! I like to sit by the fire at night and strum my guitar sometimes…by myself.”-Syd Barrett

The above was one of several conversations that Roger aka “Syd” Barrett and I had about two years or so before he passed away in 2006 at sixty. Unlike the majority of Rock artists I have come to know over the years, Syd was not “young” for his age…at least not in body. The only artist I can recall who is even “older” than Syd was for his actual years is the British guitar ace (and once phenomenal singer) Peter Green. However, unlike Peter Green, Syd Barrett still seemed unphased emotionally from all he’d been through. Unlike Green, Syd still retained that child-like wonder about himself…and everything he touched.

The very last conversation I had with Barrett was typical: we enjoyed an animated, glorious conversation about our favorite nightlights, lol! I told him all about my bluebird one, its purchase inspired by a wonderful little ditty by They Might Be Giants called “Birdhouse in Your Soul.” Roger (aka Syd) had never heard of it, so I sang him a few lines to his amusement. “Mine is wonderful; it looks like a hippo!” he exclaimed, beaming with joy. I was hoping he might write a little song about it.

Sadly, to my knowledge he never did, unless he did and his sister discovered it after his death and did the very same thing with it that she did with the precious manuscripts for his book: take it home, tuck it away and make sure it never saw the light of day again.

Having gotten to see that playful, alert, productive side of his private life in later years, I eagerly awaited the arrival of my copy of the DVD “The Pink Floyd & Syd Barrett Story.” I had heard rumors that this 2 disc DVD set-released last month on both DVD and Digital Video-revealed within its exhaustive examination of this cultural icon at least some of that delightful, unspoilt, childlike, wonderful man that the world knew as Syd Barrett. Alas, 214 minutes later, I was still waiting to see him either onscreen or in the many recollections told-in this otherwise excellent documentary-by the people whose lives and art Syd so deeply touched. 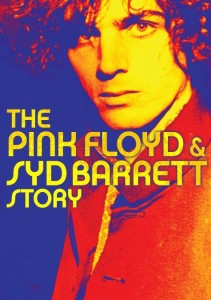 Of the interviews presented here, the one which I found to be the most interesting-although lacking any new revelations on Syd-was the additional interview “Roger Waters on Syd Barrett.” This particular interview is presented here as part of this documentary’s additional bonus material which was not included with this documentary’s original release in 2001. Now presented in pristine Dolby Digital Stereo, both greatly enhance the enjoyment factor of this in-depth and comprehensive study of not just Barrett but his bandmates whose talents shined so brightly that even the loss of their “crazy diamond” failed to extinguish this legendary band’s eternal flame.

All in all, it’s a documentary that’s clearly a labor of love; from its meticulous collecting of interviews with all members of Pink Floyd (as well as managers, friends and others who were truly close to Syd) to its carefully crafted exploration of how Syd’s use of feedback, distortion and dissonance helped to elevate the art of guitar playing to a level it had not previously reached. Even today, Syd Barrett continues to inspire generations of musicians…and likely always will.

On a scale of one to five stars, I give this one a solid 4 stars.  Hopefully, the next documentary that is made about Syd will take greater care to delve more deeply into the man whose world and work should be remembered not for drugs and dissolution but instead for its celebration of gnomes, effervescent elephants, mysterious and menacing cats…and wonderful nightlights shaped like hippos.

A native of Southern California, Shirley Peña began her career as a music journalist almost twenty years ago, writing for her websites "Stars In My Eyes: the Girlhowdy Website" and "La Raza Rock!" and progressed to creating various fan sites on Yahoo, including the first for New Zealand singer/songwriter Tim Finn. From there, she became a free agent, arranging online interviews for Yahoo fan clubs with various music artists (Andy White, John Crawford, Debora Iyall, John Easdale, etc.). She also lent her support in creating and moderating a number of Yahoo fan clubs for various music artists from the 1990s-today. As a music journalist, Shirley Peña has contributed to a number of magazines (both hard copy and online), among them: Goldmine, American Songwriter, Classic Drummer Magazine and UK-based Keyboard Player (where she was a principal journalist). A self-confessed "fanatic" of 1960s "British Invasion" bands, Classic Rock and nostalgic "Old Hollywood ", she also keeps her finger on the pulse of current trends in music, with a keen eye for up and coming artists of special merit. Shirley Peña loves Los Angeles, and is thrilled to join the writing staff of The Los Angeles Beat!
View all posts by Shirley Pena →
This entry was posted in Music and tagged pink floyd, Syd Barrett. Bookmark the permalink.