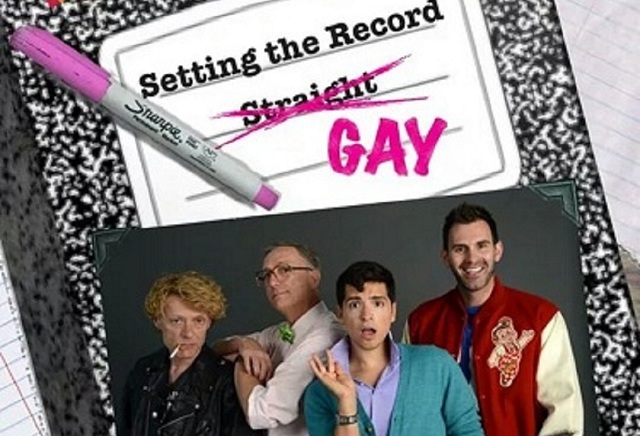 Think you know all there is to know about male sexuality—male homosexuality to be precise—its customs, its culture, what makes it tick?  What if you’re way off?  And what if there’s actually nothing to know anyway—in the collective stereotypical sense?  This is exactly what the actors, writers and director alike embark upon exploring in Avery Schreiber Theatre’s latest production:  “Setting the Record Gay”.

This collective vocalized introspection/outward examination takes place in your average-looking American high school classroom replete with those fold-out chair desks so impossible to fall asleep on, cubby sized lockers, clips on which to hang progressive art work and ostentatious teacher’s pet desk. On the blackboard reads “Homo-101” in an impending environment that looks decidedly like…uh…*Homo Room*? The set’s less than average stand-out features would have to be its festive pink walls as the Avery Schreiber Theatre’s customarily black box background has been seemingly sprayed in a fresh freshet of peppy Pepto-Bismol for the performance in question!—(i.e. a “pink box” theatre into which we all comfortably slide as the upbeat dance grooves pulsate and throb in a wave of contractions easing us into this warm and inviting cocoon leaving me to conversely  muse that if the next performance is “The Vagina Monologues”, I’ll eat my hat!)

Directed by Dodd, and starring Wenzel Jones, Leon Acord, Billy Walker and Misha D. Fisher, this play almost postures itself as a panel discussion/encounter group (though neither term feels completely correct—cultural anthropology class perhaps?) examining the unique, yet collective tapestry of your non-existently-average male homosexual existence. Featuring two actors; one roughly of the late baby boomer generation and that of the early Gen X via the respective likes of Wenzel Jones (The Wallflower) and Leon Acord (The Punk) along with two younger actors representing the Millennials/Generation Y, by Misha D. Fisher (The Cheerleader) and Billy Walker (The Jock), the play commences with Misha hankering for a lesson in Sex Ed—GAY sex Ed to be exact.  “The asshole is not like a vagina.”–“When I was seventeen, I wish there had been someone to tell me what love, sex and relationships were supposed to feel like.”  Leon (Gen X) will swiftly and eventually change to subject to Oscar Wilde much to Misha’s chagrin and vexation.  Upon further protest and additional disagreement, Leon will conclude, “There is no gay community anymore.”…“There is no gay culture,” thusly setting the fascinating and surprising tone for the remainder of the evening.

Trying to classify the gay culture/experience is after all like attempting to smoosh every minority together in the form of ” BLAIN” (black, Latin, Asian, Indian, Netherland(?)) culture according to the cast, as it is simply “too diverse to lump together”. From the “masculine/butch to femme bullshit” (and the surrounding stereotypes regarding ‘tops’ to ‘bottoms’) to little gay boys coming of age in the post AIDS era–whose self admitted “nature [being] exponentially greater than their nurture” renders the whole point of coming out nearly moot–(a stark contrast to “the attributes you want: a deep voice and hand-eye coordination [as] a deterrent when you want to come out!”), to the self-avowed lesbian who “gets off watching gay male porn”, one’s sexuality is never so cut and dry as anyone would like to make it–to speak nothing of an entire culture predicated upon such a thing. 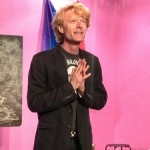 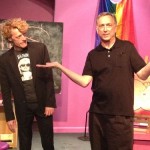 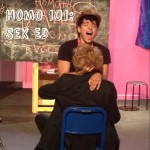 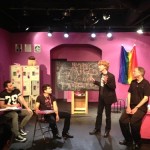 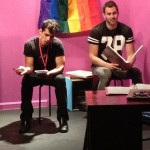 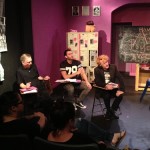 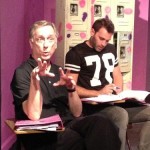 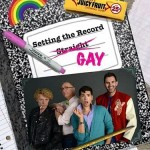 Brainchild of director Dodd, his ideas regarding this piece are fueled by an arresting curiosity pertaining to his own culture and vast hunger for potential knowledge culled therein:  “I am a gay male in my early 30’s and realized that I don’t know anything about my sexual culture.  Nor do I have any gay heroes.  Other minorities have heroes and role models to inspire and lead them.  The gay struggle is a lonely one.  We know nothing about each other. My personal belief is that we lost those forefathers in the AIDS epidemic and we’ve been left to fend for ourselves.

I want and need myself and the gay world to understand us better.   Setting the Record Gay is fun, insightful and an educational opportunity for an audience to step into our skin and see what living gay is like.

Based on a concept called Bare Naked Angels created by Stacy Ann Raposa, I led four gay men on a writing journey that ultimately produced the show you will see onstage.  Every account is true:  I created the school to serve as a framework for their stories.”

Most arresting is the quartet of coming out and coming of age recollections peppering the end of the first act as each of the actors makes point vs. counterpoint in overlapping monologues regarding the joys and horrors pertaining to these experiences. Wenzel Jones (as the Baby Boomer)’s account is blithe and dreamy yet somewhat detached as he humorously reminisces his first time near a lake, recounting in kind, his mother’s reaction to his coming out, “This gay thing isn’t going to help your hemorrhoids one bit!” Billy (The Jock–Generation Y) recalls a life in Northern England and acknowledges that, though he was good looking and masculine enough, he still felt ostracized and bullied as most of his friends were girls and he never enjoyed male company.  He will eventually go on to admit that if he still had the chance to exact revenge on any one of this oppressors, he would not regret it one bit.  He will also disclose having a Boy George Pillow (“My mum says she had no idea [I was gay].”) but admits to never feeling as though he had any role models as George’s fashion, style and persona are and were nothing he would ever aspire to.

The most dramatic point/counterpoint of the evening however would have to be between Leon (early Gen X) and Misha (of the Gen Y/Millenneal age).

Misha-Generations later it’s still this horrible, terrifying rite of passage and no one’s telling us how to do it (gay sex).

Leon-Gay was punk back then (in the early 80s).  Gay marriage—why?  We were finally stepping into our own skin for the first time!—Indianapolis Indiana-1981-Gay men everywhere!!!

Misha-The trauma and pain of the first time…

Leon-Gay life was like a party and I had just arrived!

Misha-I beg to blow him and he gets angry.

It is evident that the two younger men are much angrier than the two older ones, NOT what you’d expect and, in a word, absolutely fascinating.

Leon-“We were a walking, talking political statement with self acceptance.  Disco might’ve died but we were just being born!”

“…and then…AIDS.”—this word is scrawled sharply across the blackboard to the somber tone of Tom Brokaw’s voice cutting in with a sobering headline and Pink Floyd’s, “Another Brick in the Wall” eclipsing the scratch of the chalk as Act I concludes.

Act II will involve an anonymous audience question and answer session, (there are so many however, mine does not get picked from the jar of tightly folded note cards: “Upon being broken up with in a public place, where do you run to be alone and cry?  The bathroom’s no option as he can follow you in there.”—One of my primary concerns for gay folk on the receiving end of a Dear John monologue (before rushing to the john as I would).  But perhaps and partly because I am a woman, I anticipate the stereotypical feminine urge to escape the object of one’s anguish and sit somewhere quietly amidst loudly whirring hand dryers and emphatic toilet flushes, as a metaphor for all too much flushed heretofore passion now blown away…).  The second act will also examine the stereotypes of the mechanics of gay sex itself and assumptions we make regarding certain men’s appearances and which uh…position they prefer.  It will discuss why gay men (and perhaps even women) need Sex Ed classes in their own right and, in light of this, address young Misha’s pain pertaining to his own induction into the world of gay sex in most supportive fashion!

There is not much talk of AIDS after its brief mention in the first act however, which surprises me. But apparently there is a reason.  After speaking with the two more mature actors after the performance’s conclusion, their response:  “We’ve talked about it enough…”

In short, a very arresting, fascinating and touching evening—a definite must see!

Jennifer K. Hugus was born at a very young age. At an even earlier age, she just knew she would one day write for the LA Beat! Having grown up in Massachusetts, France, and Denmark, she is a noted fan of Asian Cuisine. She studied ballet at the Royal Danish Ballet Theatre and acting at U.S.C. in their prestigious BFA drama program. She also makes her own jewelry out of paints and canvas when she isn’t working on writing absurdist plays and comparatively mainstream screenplays. Jennifer would like to be a KID when she grows up!
View all posts by Jennifer K. Hugus →
This entry was posted in Theater and tagged Avery Schreiber Playhouse, Billy Walker, Dodd, Gay Pride, Homosexuality, Leon Acord, Misha D. Fisher, Wenzel Jones. Bookmark the permalink.

One Response to Setting the Record Gay: Gay Just Got Real!