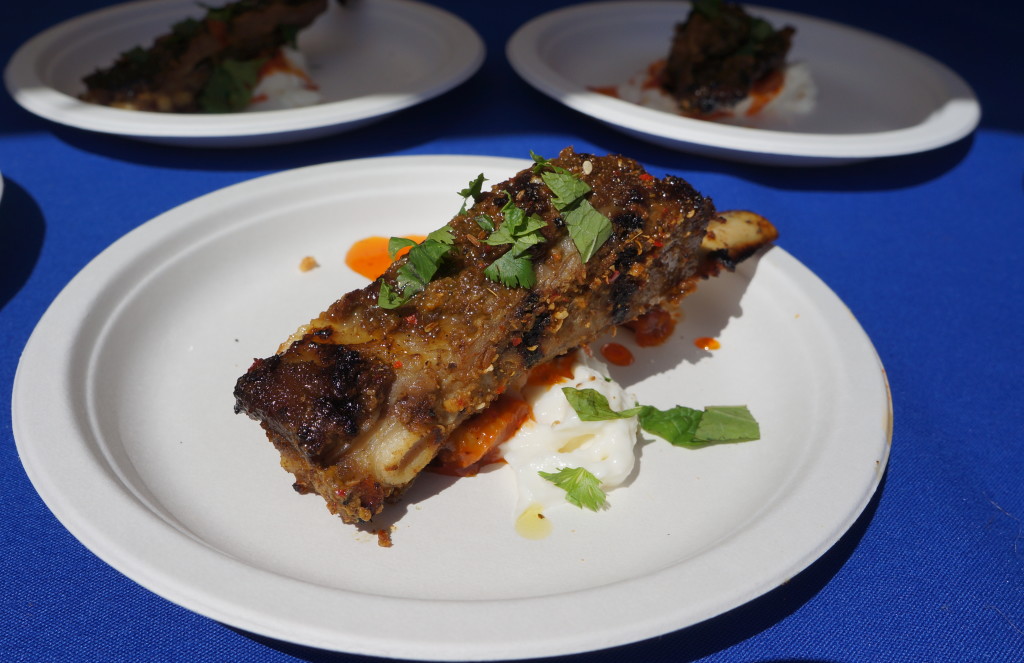 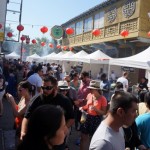 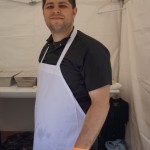 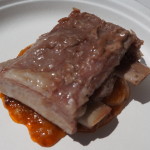 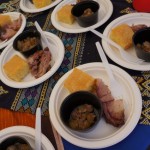 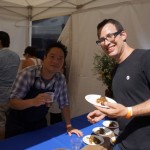 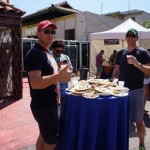 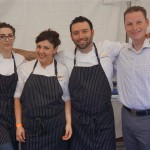 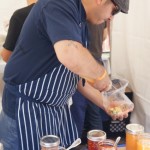 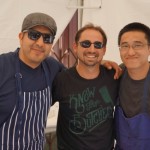 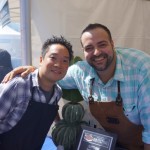 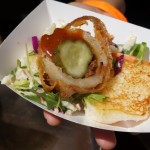 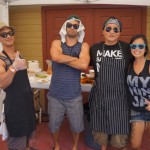 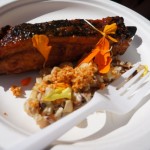 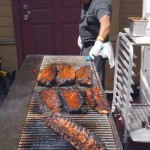 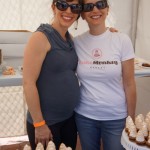 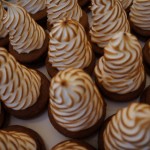 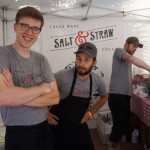 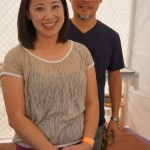 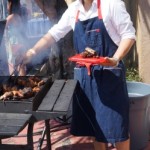 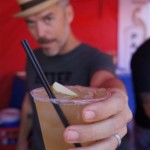 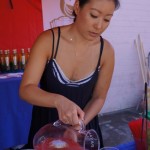 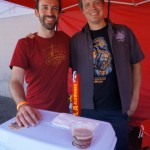 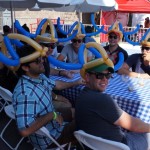 Congratulations to Food GPS for a fantastic festival! From the moment I saw workers checking guests in and giving them wristbands while they waited in line, I knew this was going to be a well-organized event. Most events have so many tents it’s impossible to try all of the food you would like to, both because of time and precious stomach space. Having less tents offering larger servings made it easy to try everything. Also, without having to race to the next tent, the atmosphere was less rushed, and I could tell that the chefs were less stressed out.

One of the best dishes I tried was from Chad Colby of Chi SPACCA. Pork Rib Confit? Seriously? It melted in your mouth. I am used to pale meats being boiled and tough, so it was real surprise for the palate. I even asked for another spoonful of the flavorful Trotter Beans, which are even bigger than favas. They told me that you can order the beans as a side dish at the restaurant. Hold me back!

I have been meaning to get out to The Park’s Finest, but I just never do. That is now my mission in life. Johneric Concordia’s Beef Shortrib was a thing of beauty. It was sliced thinly, like tri-tip, and it was beyond tender. I asked, “What animal is this that it doesn’t have any connective tissue?” They just kind of looked at me funny, like “Where’s security? Just in case.” The cornbread, made with cornmeal, rice flour and lots of sugar, was heaven. A total stranger stopped me to discuss the cornbread.

Another impressive showing came from Vartan Abgaryan of Cliff’s Edge, who wowed the tastebuds with Crispy Pork Ribs, Honey and Fish Sauce Glaze, Toasted Rice, and Watermelon. One of the Beat’s favorite chefs, Bryant Ng of the currently shuttered Spice Table mixed things up with Lamb ribs (cumin, chile, mustard) and Burrata, be still my heart. The sandwich from Heirloom LA knocked it out of the park with a Chicharron Wrapped “McRib” roulade with “Sweet Baby Todd’s BBQ Sauce” on Hawaiian Bread was like the best slider in the world, with a homemade pickle to balance out the fat.

Eduardo Ruiz  of Corazon y Miel took things to a whole new level with something I dubbed “The Build a Bag Workshop.” They hand you a bag with riblets, cucumbers and summer fruits, and you can add a variety of spices and sauces. It was kind of like an upscale version of Cueritos Preparados. If you have ever eaten vinegar-marinated chicharrones out of a Frito’s bag, you know what I’m talking about. Another winner was Scarpetta’s Freddy Vargas who served up Spiced Spare Ribs with smoked tomato agro dolce (Italian sweet and sour sauce) with a mustardy peanut potato salad.

As for side dishes, besides the cornbread and trotter beans, a few sides even outshone some of the main dishes I ate. Chris Oh of Houston Hospitality / Seoul Sausage / Escala made an impression with Colombian Street Corn, off the cob and mixed with Cotija cheese. Erwin Tjahyadi of Komodo Food offered “Filipino Macaroni Salad.” I asked what was Filipino about it. The reply was, “Well, a Filipino made it.” “But are the ingredients different? Is there crushed dried shrimp or anything in it?” He said it’s how they eat it on the island, sweet with chopped pineapple. I ended up returning to beg for the recipe.

Down at the dessert end of the festival, Cake Monkey displayed a Seussian wonder of marshmallow spirals. How did they get only the thin decorative edges of the marshmallow to brown so perfectly? I have tried a lot of S’mores desserts, and if the display had not been so whimsical and intriguing, I might not have even tried it. But these cookie creations were flavored with a deft and restrained hand. The graham cookie was not overwhelming, and managed to stay fresh and soft. Often sandwich cookies are too hard because they need to be for proper construction, or they are cranked out a day before assembling. Not Cake Monkey, their cookies tasted like they were fresh out of the oven. A rich chocolate ganache filling plus the magic marshmallow spirals made the “Inside Out S’mores” one of my favorite bites of the day.

Salt & Straw blew my mind with Tomato Water Olive Oil Sherbet. It was pure tomato essence. They will be opening a brick and mortar in Larchmont soon, in spite of my appeals to open in the valley. Sharon Wang of Sugarbloom Bakery baked up a delicious Curry Apple Hand Pie made with a Curry powder Puff Pastry filled with Caramelized Apples, Brown Butter and Cheddar Cheese.

Los Angeles Ale Works provided soft drinks that were both refreshing and surprising. Thai Tea Soda, Peach Ginger Ale and Cornbread sodas. Of course I was all about the cornbread. It wasn’t heavy-handed like Jones Soda’s novelty soft drinks. It was light with just a hint of corn. There were also fruit juices for the teetotalers from Bolthouse Farms. Jason Bran and Damian Windsor mixed up a Melon Blossom Breeze made up of Pavan Liqeur, fresh watermelon and lime. The perfect refresher for a hot summer day. They were also serving a Lincoln County Cocktail with Jack Daniel’s, lemon, and fresh apple soda for those who like their dark spirits.

There was a group of guys celebrating the World Cup who were probably getting their money’s worth on beer alone. At one point I looked over and they had stacked their plates on the table like guys do with beer cans at the bar. Later I found them wearing giant balloon hats. By this time I was one of the bros and I thank them for the photo ops. The crowd was happy and full, and chefs were trading plates. It was a perfect day. Well, if only the sun had turned it down a notch. But there were tables and chairs with shade and umbrellas, so when the Food GPS Fried Chicken Festival happens in August, make sure to don your balloon hat and come hungry.

Born and raised in the great city of Los Angeles, this food, culture and music-loving punk rock angeleno wants to turn you on to all that is funky, delicious and weird in the city. While Elise holds down the fort, her adventurous alter ego Kiki Maraschino is known to roam the country in search of catfish.
View all posts by Elise Thompson →
This entry was posted in Cocktails, Beer, Wine & Weed, Food, Photo Essays. Bookmark the permalink.