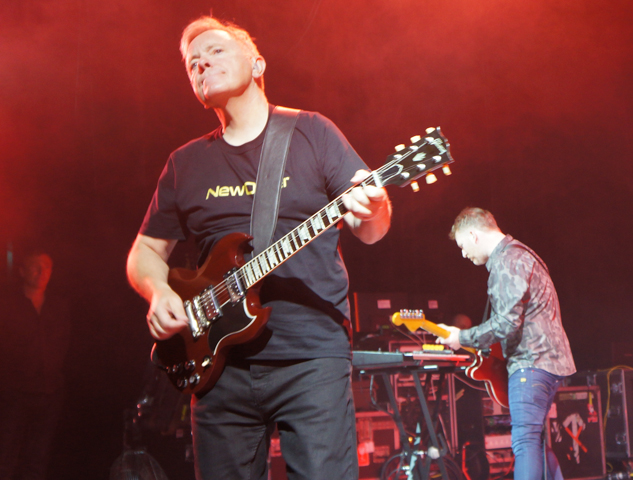 New Order’s Bernard Sumner and Phil Cunningham at the Greek Theater 7/13/14. All photos by Bob Lee for the Los Angeles Beat.

Will wonders never cease? Despite a decades-long rep as one of the most boring and aloof live bands in all of music, New Order hit the Greek Theater ready to rock. I’d never seen them in person before, but footage from their eighties gigs showed a group of people who appeared to be in four different cubicles, working on four different things. Now having lost founding bassist Peter Hook, historically the only one who ever moved on stage, the rest of the band seems to have taken a couple of classes in Showmanship. They have two new members that know how to command a stage and look good doing it. And guitarist/ vocalist Bernard Sumner has not only learned how to have a polite conversation with a California audience – you talk about weed, the old days, and how much you enjoy being in California – he’s actually learned some footwork. Halfway through a stomping version of “Regret”, I expected him to start doing knee- jumps.

Consider it an adaptation, an attempt to meet the live audience halfway, now that most of what the band does is travel around playing its old songs. No one is expecting Sumner to turn into Paul Stanley – though come to think of it, that would be pretty awesome if it happened for just a minute in the middle of a show and he started hollering “All riiiiiight! How many of you pee-pole like the taste of alcohol?” – but there is now an acknowledgement that you must give the people something to look at, you must talk to them a bit between songs, and you must briefly leave the stage before returning for one or two more songs. These are traditions in showbiz, and acts that want to play the big rooms for a long time after they stop making records will learn to respect them. They’re aware that a light show must be provided, even if it’s laughably state-of-the-art-1983 in origin. And they’ve learned to play these fragile and tentative songs with actual rock and roll balls, without ever losing that mechanical precision that glues them together. They are, in fact, rather good live.

Photo gallery and full review after the break.

They are mercilessly tight, and the steady hand of drummer Steven Morris is really something to behold in person. His is a machine-like style developed before the widespread use of machines, a rhythmic bridge between rock and EDM. When they really hit their stride, and this gorgeous, intricately layered, hypnotic music starts floating out through the Greek, the whole question of stage presence seems silly. A sound this pristine would be worth experiencing even if the people on stage didn’t move around and they were illuminated with plain white light.

Keyboardist Gillian Gilbert provides the one throwback to vintage New Order stage presence, standing stock still, looking vaguely occupied, not even a giving rhythmic head bob to the intro of “Blue Monday.” That’s OK, not everyone in the band needs to take those Showmanship classes. As the haunting synth refrain from “Your Silent Face” stretches out like fingers of fog over Griffith Park, one has the urge to bow to her. A few minutes into the track, Sumner will get whoops from the crowd for playing the bridge on a melodica. It’s simple but effective, just like his guitar playing and singing. His voice has only sweetened with time, giving some of the early 80s material a bit of the crooner’s touch – at least, he no longer sings like he’s about to nod out.

As for new members Tom Campbell on bass and Phil Cunningham on guitar, keyboards and percussion, they hold up their end of the bargain. It is, frankly, a bummer not to have Peter Hook there, one of the most unique bass players in modern music, and the creator of so much of the crucial counterpoint that makes those songs breathe while caught in a hypnotic state. But in a live context, it’s possible to get over it if his replacement does a note-perfect replication of his parts, as Campbell does. Even on the new song “Plastic”, presumably written after Hook’s departure, if you weren’t looking at the stage you wouldn’t notice he was gone. Cunningham acts as a utility player, filling whatever sonic gap is needed in order to make it sound like the records. Their contribution is toward the accuracy of the live performance, and neither one lets the side down. And as mentioned, they can strut and pose with the best of ‘em, especially Campbell, who I repeatedly thought was going to spear me with his bass while I was in the photo pit.

Three Joy Division songs were aired, “Isolation”, “Atmosphere” and “Love Will Tear Us Apart”, the most rapturously received songs of the night by far (though honorable mention must go to KROQ hit “Bizarre Love Triangle”, which had what looked like every single woman in my section singing along to every word). Following “Ceremony”, Sumner mentioned that the band had written the song hoping it would “cheer up” JD singer Ian Curtis, dryly observing, “Obviously, it didn’t work.” Oof! Even Paul Stanley winced a little hearing that one, Bernard, but we understand you’re still getting used to talking to people in big groups, so cheers to you for stretching your own traditions a little bit.

La Roux opened with a 45-minute set that could have been the opening act for New Order when “Blue Monday” was a new song. It’s interesting, just last weekend I went and saw a group of young people play music that sounded like the 1930s, and this week I saw young people play music like it was the 1980s, and I’m starting to wonder, what’s the difference? That band was made of animatronic bears, this one is made of hairspray and parachute pants. 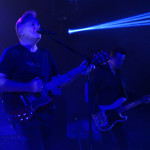 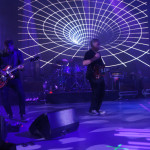 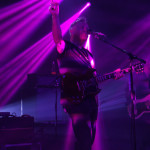 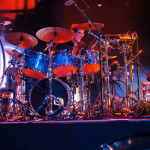 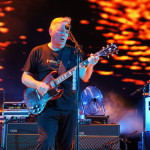 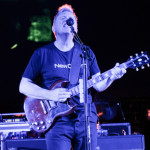 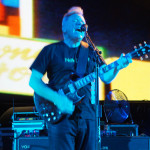 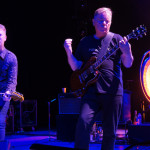 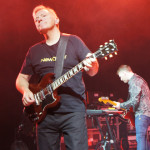 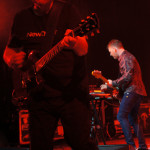 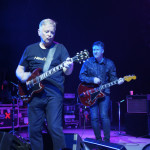 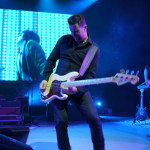 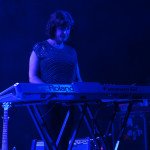 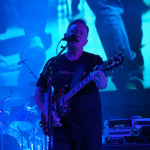 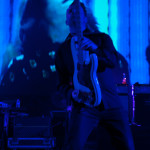 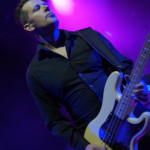 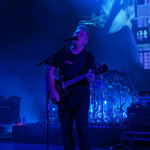 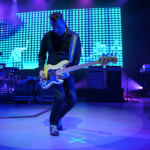 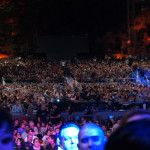 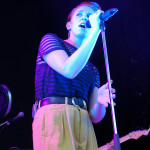 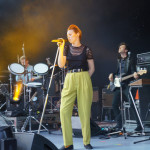 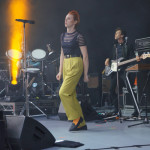 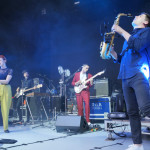