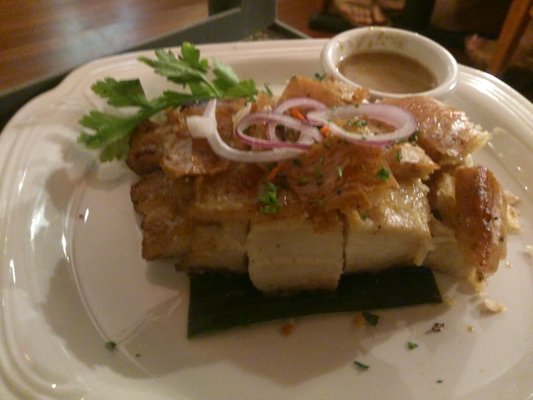 I remember coming to the LA Rose Café during the first wave of Nouvelle California Cuisine which started sometime in the mid 1970’s in Los Angeles and incorporated mainly French cooking technique with Japanese aesthetics.  Around 1982, we stepped into LA Rose to partake of their version, and so I had no inkling about their other dishes on the Pilipino side of the menu.  Now over 32 years later I stepped into the very same portal with a full emphasis on the culturally complex Pilipino cuisine.

The basis for the cuisine is Malay same as that of Malaya and Indonesia, but the Philippines had influences from traders or missionaries by the way of China, India, Arabia and also was a Spanish colony for over 300 years and a US colony for almost 50. So fusion cuisine is not exactly anything new in the food of the Philippines.

The left side of the restaurant is the formal dining area. The first room is narrower with maximum seating for 4 while the larger inner room by rearranging tables can accommodate our group of 9.  Go to Sunday brunch since there was a duet of cello and guitar who were playing mostly popular songs, but modified to sound more like Classical European instrumental music. 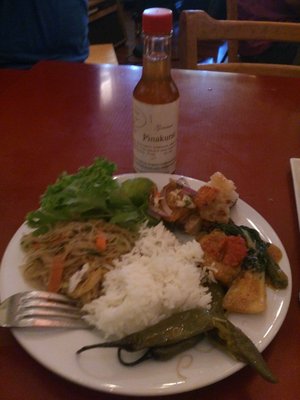 The interior is an eclectic mixture of East and West, folksy-homey, in a rather genteel faux central European manner.  Rather pleasant place to dine in a relaxed, quiet manner so lacking in more of the new “restaurants” like Bestia, Animal, etc. where the din makes eating a displeasure.  The civilized environment provided by LA Rose is so restorative.

Robert and Eric, both of Pilipino descent, either ordered the meal or helped explain the 7 dishes that were ordered.

Sinigan na Baboy was a watery sour soup made that way with a touch of tamarind paste and maybe vinegar.  There were pieces of Japanese eggplant, Daikon radish, green long chiles and tomato.  There were no evident pieces of meat although there was a definite animal based broth.  The flavor profile is mostly salty and sour, and light enough to be a starter to the meal.

Pork belly Lechon was amazing in its lush fattiness.  The fat felt velvety soft and infused with what the owner said was aromatic star anise. The top was a thin layer of extra crispy skin that shattered into shards as you ate it with the soft cushy belly fat. A little bit of porky umami filled liver sauce on top was the perfect companion to this wondrous taste combination. Full of cholesterol, but so worth the 20 billion calories.

Kare Kare Oxtail Beef Tripe is slow simmered tripe in a peanut sauce.  The tripe is cooked for so long, the texture is soft, almost gelatinous.  The light peanut sauce does not overpower the dish. It’s a mild yet slightly rich dish.  In order to pep up the mild flavor, the owner provided Bago’ong, a sautéed, slightly fermented shrimp paste to add that sea funky umami to a rather creamy dish.

Pancit Sotanghon: first part refers to noodles while Sontanghon refers specifically to the thin translucent pasta made from mung beans, and other starchy vegetables. Some people would call them cellophane noodles, and they are flavored with Patis/fish sauce, soy sauce, white pepper, chicken broth with thin slices of chicken and green onions. Garnished with lime to use as a gastrique to enliven the flavours already in this dish.

Beef Machado is a simple dish of garlic, onion, tomato with beef simmered all together. It’s basically a hearty stew to eat with rice.

Crispy Pata is deep fried pig knuckle with a soy/vinegar sauce and a chile pepper or two as a condiment.  Meaty, hearty, porky in taste & texture.  It is for carnivores who like to encounter some big bones.

The French have Boudin Noir; the Germans Blutwurst; the Pilipinos have Diniguan which is a “pig blood stew made of meat and/or offal (typically lungs, kidneys, intestines, ears, heart and snout) simmered in a rich, spicy dark gravy of pig blood, garlic, chile, and vinegar. Dinuguan comes from the Filipino word dugo meaning ‘blood’.”  It doesn’t taste as bad as it looks.  In fact, the Diniguan at LA Rose is another mild, rich, slightly sweet dish full of thick, dark almost black broth and pieces of shredded pork.

LA Rose Café can now be considered to be an old school restaurant that is pleasant, cheerful, and warm, where the Pilipino cuisine has certain fine touches. The owner is welcoming, friendly, and makes a good effort to see that your dining experience is satisfying. 32 years in business, something has to be right.

A gourmet since the mid 1970s, Gary Idama has an extensive knowledge of a variety of cuisines, but is partial to Japanese food. When Gary reviews restaurants, he looks for good food and drink, good bang for the bucks, a clean eatery and kitchen, plus knowledgeable and enthusiastic service. He is a member of Yelp's Elite and spends his time at restaurant and cultural events, hanging out with friends, and attending Sake/Wine tastings. His last meal on earth would be Omakase with premium Sake at Mako Sushi in Little Tokyo and maybe a little salted, preserved Fugu ovary with a Napa Pinot Noir.
View all posts by Gary Idama →
This entry was posted in Food. Bookmark the permalink.