Actors & Others for Animals and Celebrity Autobiography Join Forces for Best in Show Extravaganza! 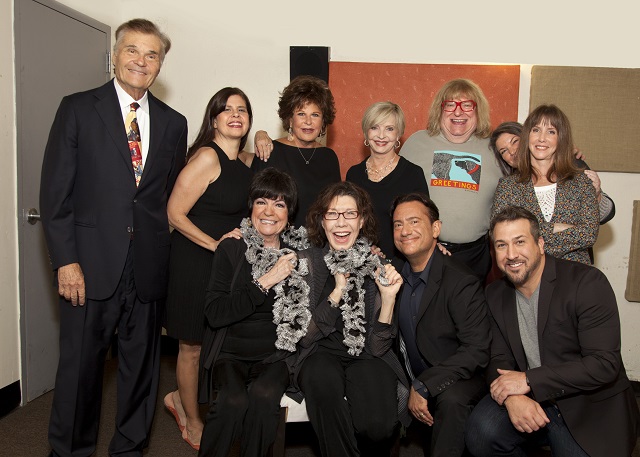 It is a balmy and electric night in NOHO, curbside of North Hollywood’s venerable and prestigious El Portal Theatre! Men, women, and dogs (including a most adorable bulldog named Bubbles) take their evening walks but mostly linger (loiter really) along the starry sidewalk and I arrive just as Florence Henderson and Fred Willard hit the red carpet, soon to be followed by Bruce Vilanch and Lily Tomlin.  So commences Actors & Others for Animals and Celebrity Autobiography’s festive and fur inspired October 13th fundraiser to raise money and awareness for Actors & Others for Animals’ rescue/spay and neuter foundation!

The lobby is a bustle with animal supporters and celebrities alike including Mindy Cohn, Jackie Joseph, Anne Jeffreys, Leonard Maltin and none other than Actors & Others for Animals president herself Jo Anne Worley, meetin’ and greetin’ with the best of ‘em! A silent auction progresses along nicely in the central lobby and a snack bar replete with alcoholic beverages to candy sits off to the left entrance and it is made clear that any refreshment purchased may be brought into the lavish theatre for tonight’s festivities—Oh joy! 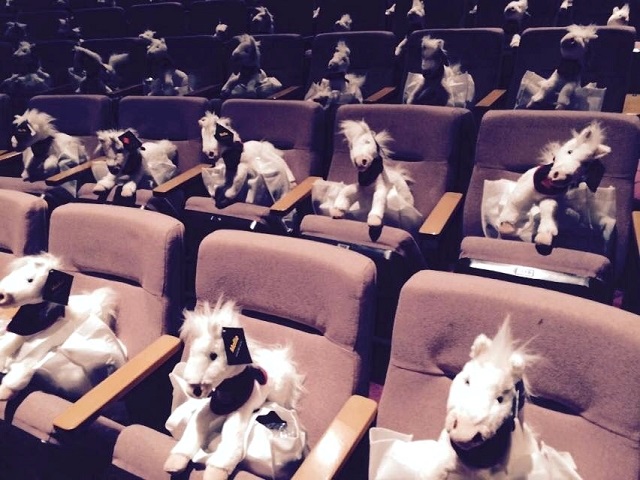 Upon theatrical entry, an entire herd of stuffed white horses (or rather “seat fillies” as they have come to be dubbed) sits captive in anticipation of the night’s impending, dramatic extravaganza—all donated courtesy of Wells Fargo, commemorating one of their classic cash carrying ponies Mollie! 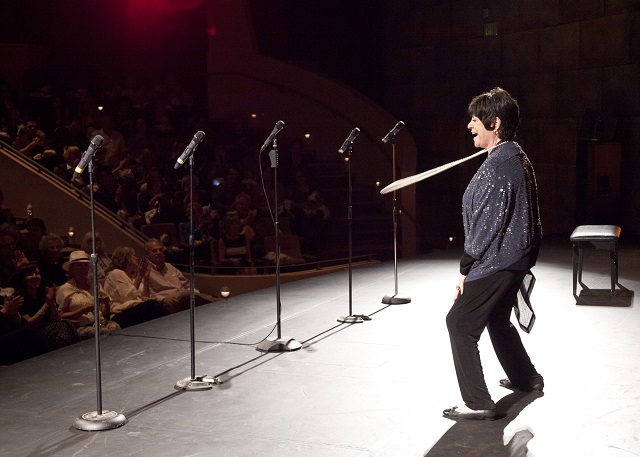 At the performance’s commencement Jo Anne Worley will enter, wearing the most sparkly shirt and perky scarf to palpably thrumming energy sensed throughout the audience. Blowing the most “Laugh In”-esque of zip whistles, she will croon, “Don’t you all just love your new little ponies?  Shake your ponies!”  She will proudly introduce Jonathan Weedman Senior Vice President of the Wells Fargo Foundation for assisting in making this evening possible.

A lunch for two with “The Ladies who Lunch on Sunset Blvd.” will be auctioned off along with a trip for two to Hawaii and a VIP box to the Hollywood Bowl!

As “the only show inspired by the autobiography of Vanna White: Vanna Speaks”, as declared by the production’s creator Eugene Pack, the night will afford many-a-laugh. 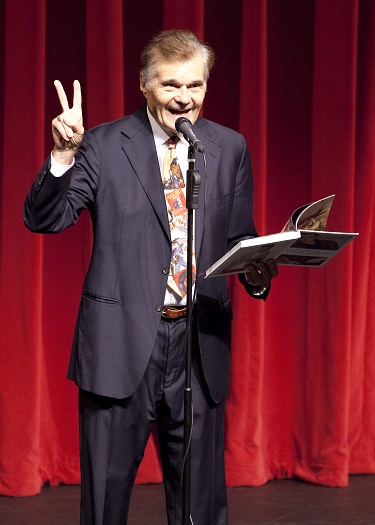 Fred Willard alights the stage. “I will be reading from Justin Bieber’s second memoir,” he will openly declare as the audience lets out a howl. It will soon be discovered that Bieber’s entire life’s dramas subsist around food.  From the “best ice cream ever” he ate while on tour in Buenos Aires, “Dulce con Leche con Brownie” to the TGI Friday’s across the street from his hotel, the august Willard will narrate the young punk’s life seamlessly describing a claustrophobic Bieber’s ride in the trunk of a car to TGI Friday’s to avoid a mob scene, to returning to procure ice cream after being turned away from the establishment. “I ate my ice cream alone in the trunk…[but it] turns out Friday’s delivers.  It might have been good to know that before I got in the trunk.”

Florence Henderson will read from the autobiography of Mr. T with much gusto and vigor whilst imitating the noted figure to well… a T! Upon auditioning for Rocky 3, “I received a seven page script to study in three days,” she will growl mellow dramatically to the audience’s uproarious laughter. 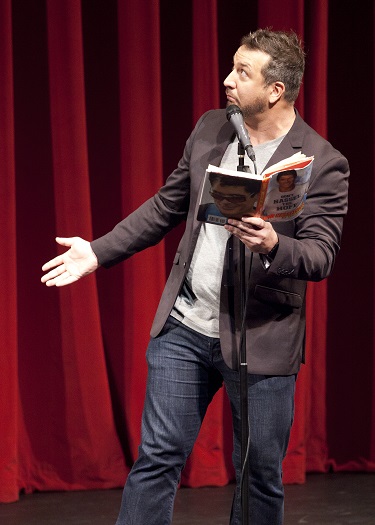 Picture it:  David Hasselhoff–Jekyll & Hyde–Broadway; “What is wrong with you David Hasselhoff?  Why do you put yourself through this?  Are you crazy?…five weeks of rehearsal, playing two characters? Fourteen songs—one a duet between Jekyll and Hyde?”  Don’t picture opening night.  Who could ever recollect? “I couldn’t remember a thing about the show except a standing ovation… One night, I overdid a note and passed out onstage and awoke to the scenery being changed around me.”

Larraine Newman will do a spot-on impression of Carol Channing as she recounts her “friendship” with Barbara Streisand while performing the title role in Hello Dolly on Broadway…until Babs garners the film role but not before Hello Dolly sweeps the 1964 Tony Awards over Babs’ infamous performance in Funny Girl. 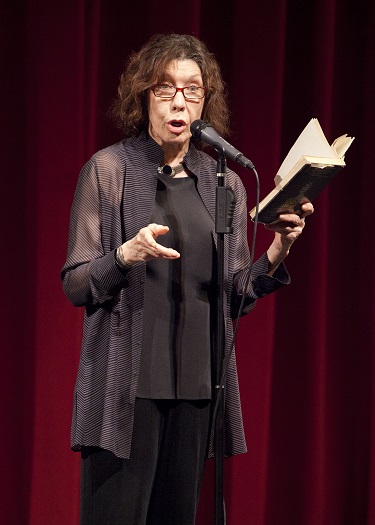 Lily Tomlin will delight as the, sultry, mysterious Austrian-accented Hedy Lamarr from her noted autobiography The Ecstasy in Me.  The audience will wax giddily enthralled as Tomlin articulates Lamarr’s near surrealistically, strung together musings in an erudite aloofness to rival that of the Grumpy Cat reincarnated as Zsa Zsa Gabor, “I have been told I have the firm body of a young girl.  This is good.”  “Men are most virile between the ages of thirty five and fifty five.  Any man under the age of thirty five…I don’t have time to teach him.”   “I don’t fear death because I don’t fear things I don’t understand.”  “I owned four buildings on Wilshire Blvd.  I was so rich, I didn’t know where they were.”  “If I had to name my favorite past time, I would say, ‘talking about myself’.”  “I invented sonar.”  “I was a spy for America.”

The audience will delight to an all-star mash-up of monologues as Eugene Pack reads from the autobiography of Ricky Martin who will vacillate betwixt two not-so-distinct alter egos “Ricky” and “Kiki”. Mindy Cohn will intrigue and inspire us all with her rendition of Miley Cyrus’ deep wisdom regarding girlfriends, luck and luck at a random tampon machine and Lainie Kazan will give us a hearty chortle as the husky voiced, non sequiterily-minded, yet fabulous Ethel Merman!

Animal autobiographies will be explored in a mash-up all their own featuring Lily Tomlin as the New York thug-voiced Sandy from the Broadway musical Annie, Mindy Cohn as the perky Millie of Babs and George Bush I Whitehouse fame, Bruce Vilanch as Shirley Maclaine’s dog Terry from the esteemed dogobiography Out on a Leash and last but certainly not least, Joey Fatone as Paris Hilton’s diminutively comedic Tinkerbell. 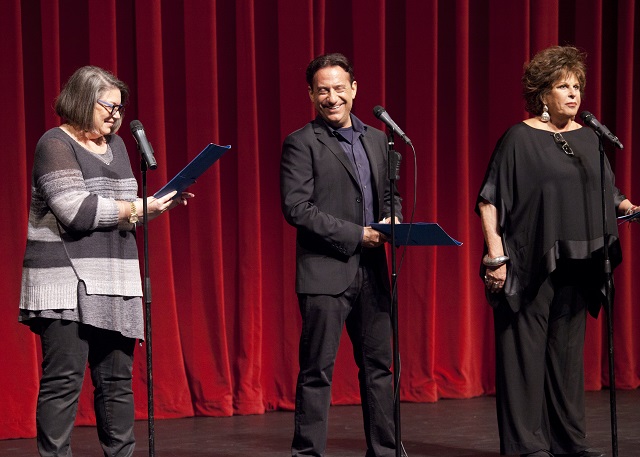 Larraine Newman will give a stellar reading of poetry by Suzanne Somers from her critically unacclaimed work, Touch Me.  Top poem subjects/titles revolve around, “The Quiet Loneliness of Being Alone” and love itself wherein Somers, via the giddily lilting Newman, will declare, “If anyone has any extra love to go around, I wish they wouldn’t waste it on dogs!”  The audience will let out a half gasp/half groan…

Rounding out the night and celebrating the evening’s declared and inspired “he said/she said” fiesta aka “Celebrity Rashamon..and on…and on…” will be a mash-up of autobiographies written by none other than, Debbie Reynolds, read by refreshingly innocent (Celebrity Autobiography co-creator) Deyle Reyfel, Elizabeth Taylor, performed by the salty and vinegary Lainie Kazan and Eddie Fisher by the near purely, matter-of-fact Willard all read intermittently simultaneously.

All in all, a most fun and giddy evening of spoken word!

For more information on Actors & Others for Animals and Celebrity Autobiography, please visit:

Jennifer K. Hugus was born at a very young age. At an even earlier age, she just knew she would one day write for the LA Beat! Having grown up in Massachusetts, France, and Denmark, she is a noted fan of Asian Cuisine. She studied ballet at the Royal Danish Ballet Theatre and acting at U.S.C. in their prestigious BFA drama program. She also makes her own jewelry out of paints and canvas when she isn’t working on writing absurdist plays and comparatively mainstream screenplays. Jennifer would like to be a KID when she grows up!
View all posts by Jennifer K. Hugus →
This entry was posted in Miscellanious and tagged Actors & Others For Animals, Bruce Vilanch, Celebrity Autobiography, El Portal Theatre, Eugene Pack, Florence Henderson, Fred Willard, Jo Anne Worley, Laini Kazan, Larraine Newman, Mindy Cohn. Bookmark the permalink.