Bravefest at the Florentine Gardens – Review 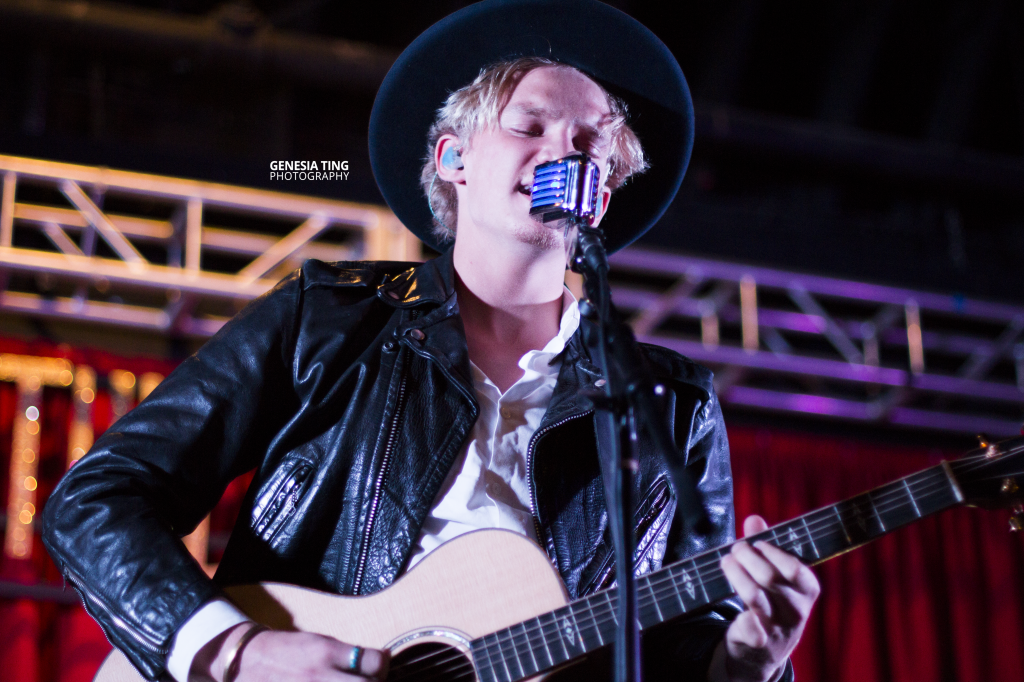 Cody Simpson at the Florentine Gardens. Photo by Genesia Ting for the Los Angeles Beat.

Unfortunately, it rained all day, which caused a little inconvenience.  I arrived a little after 9:30am for press check in, and entered the venue.  It was definitely a nice venue, but it was geared more towards a nightclub setting (which it is) than a concert venue.  I met up with Dash Dobrofsky (cast member of YouTube show “Summer Break”) to do a quick shoot before the meet and greet was scheduled to start at 10:00am.  You can see the photos I took of Dash here.

The show started at around noon, hosted by Ava Allen.  They had a fenced off area near the front of the stage for those who had purchased a “front of the stage” pass.  The security guard didn’t let me go to the front to take photos, even though I had a press wristband on.  Since I shoot with my 50mm f/1.4 Canon lens for concert photography, it is a short range lens without zoom that is best used when close to the subject.  They didn’t have a photo pit either.  I wasn’t able to go to the front to take photos until much later in the afternoon, about 4:00pm when a new and less strict security guard took his shift.

The first performance I was able to shoot up close was Fly Away Hero, a punk rock band from Texas.  I had known about them previously, as their main singer, Dalton Rapattoni was a former member of IM5, a pop band I have been keeping up with.  They performed four songs total, including some covers of bands like Green Day and 1975, as well as original songs.  One of the original songs I really liked was “Hercules,” which Dalton, and his friend Will Jay wrote.  The performance level of Fly Away Hero was amazing, and the crowd was easily able to vibe along with the music.  You can see my photos of Fly Away Hero here.

JC came out to introduce a performer and the audience went crazy.  They surged up to the front of the stage, causing chaos.  A fan to the left of me even lost her beanie.  I tried to keep my camera safe.  He definitely kept the crowd hype up with his smiles.  He gave a lucky fan a stuffed animal that was in his shirt pocket.

Shortly after, the headliner, Cody Simpson performed.  He executed many of his songs with his excellent stage performance, including “Home to Mama,” a song he wrote with his friend Justin Bieber a couple months ago.  Since there was no photo pit, many fans pushed continuously, and ended up pushing me so close to Cody that I wasn’t able to get shots of both him and his entire guitar in the same shot.  I wish a photo pit would’ve been provided.  You can see my photos of Cody Simpson, JC Caylen, and other performers here.

However, this event was extremely memorable, although it was an 11 hour event for me.  I would’ve liked to see a little more lenience with those who are covering press, but it was overall a great event.

Genesia Ting is a product designer by day and concert photographer by evening. She enjoys discovering new eateries in the Los Angeles area, hiking by the coast, and exploring different parts of LA.
View all posts by Genesia Ting →
This entry was posted in Miscellanious and tagged bravefest, cody simpson, dalton rapattoni, dash dobrofsky, fly away hero, genesia ting, jc caylen, summer break show, will jay. Bookmark the permalink.