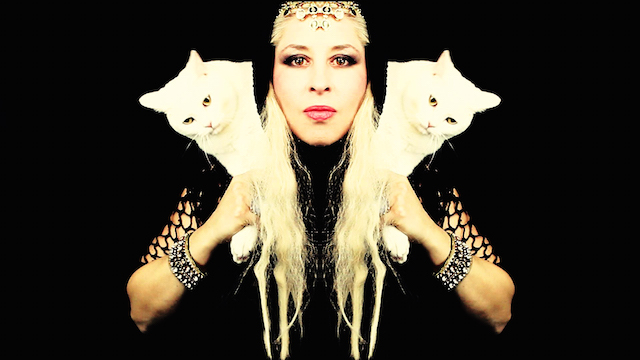 Jesika von Rabbit always loved music. “My mother started me on piano lessons when I was five years old”, she said. “She was a singer growing up in Wisconsin and I knew I loved music like from straight out of the womb. I knew I wanted to express it. I loved music and that it was very important to me to have music in the house. So my mom started me at piano lessons in first grade and I stuck with that up until I was a senior in high school. I performed in concerts, had solos, performed in choirs and stuff. I just knew that’s what I wanted to do since I was five years old. I just did everything I could to keep it going. And here I am!”

Jesika, who achieved success with renowned band Gram Rabbit, is at a point in her career where she wants to keep the music flowing from herself. Her latest direction is as a solo performer to create new musical ideas. Her new music has been called ‘inter-galactic pop’. Jesika said about it, “I guess that’s a pretty good description right now. It’s sort of psychedelic electro-pop. It’s pop-py, but it’s got a lot of cool frequencies and layers—-it’s not like it’s straight-up mainstream pop music, because most of that is really horrible. I’m pretty quirky and I like stuff that’s outside the box, but I also like catchy hooks, so right now I’d probably call it electro-psyc-pop”.

Jesika talked about her new music, culminating in a new record and upcoming show at Bar Sinister on January 31st in Hollywood. “It’s just one more aspect, really—-I kind of hate the term ‘going solo’—-its just that Gram Rabbit has been going for a while and we still do some stuff here and there, but I needed a break and I needed to just keep making music. It wasn’t some real conscious decision, like ‘going solo’” In fact, as Jesika said, “I’ve been able to achieve things musically with other people and I’ve enjoyed that frank exchange of ideas. But I think it makes things easier as I don’t have to ask for any one else’s opinion. If I like something, I can just go with it, instead of other people maybe not liking it. Maybe there’s a little conversation, then you have to vote each other out. There’s always a little bit of tension there. There’s definitely freedom in it, but sometimes when I’m writing I like to have one other person to bump ideas off of. But at the same time, it’s nice to be able to do it all yourself and not have to worry about what any one else thinks. It feels good to be able to accomplish that without anyone else. There’s freedom in it, but I enjoy writing with people and I enjoy writing by myself”.

She continued, “I know how to run ProTools and do my own recording so I started recording demos. I then decided, I should book some shows because I have to stay happy, it’s my passion, it’s in my blood. So I just put this new show together, I have some dancers, and I started to do it. I decided I was going to make a record, so it’s not like I wanted to go solo, it’s that I am a musician and I need to keep performing to keep on doing it, so here I am doing it. I still love to play in front of people and I am still open to the possibility of someone joining me in this endeavor. I kind of miss having someone on stage with me just to feed off of, that’s something I’m still looking for, but I’m not going to stop performing because I don’t have that yet. So I’m doing it because I have to and I enjoy it; solo or with other people, I just enjoy making music”. 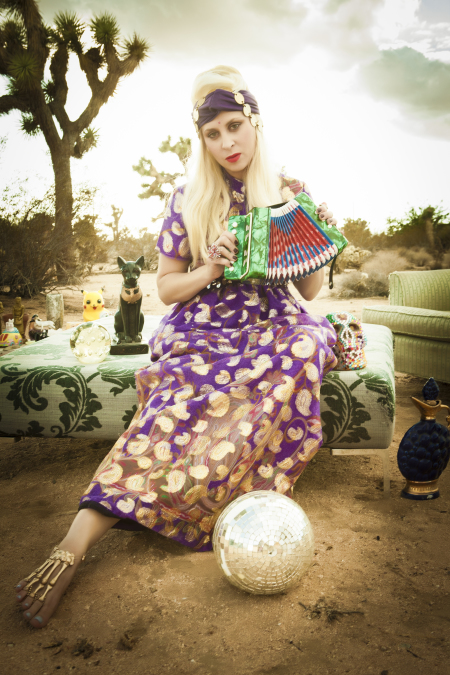 Her new album is ready to hit the turntables. “I have a new record that’s finished. It’s not released yet. I just shot a video for one of the songs off of the new record—-its called Psychic Spice. It, ‘s kind of a fun, quirky, fast-moving, chant-y kind of song and the video is super-colorful, psychedelic, it’s kind of like the first single off of the record.” Jesika is ready to get onstage and said about the upcoming show, “I’m super-excited, it’s my first Los Angeles show of the new year. I like that venue, it always sounds pretty good and it’s half outdoors. I’m just working now on a new stage show, I’ll have dancers on stage with me and projections, kind of switching it up for the New Year. Bringing some now performance-art pieces in that we’re working on now, gearing up for that show. The crowd is like a goth-type club, they seem to be pretty responsive to everything I do and its got a great location, right in the heart of Hollywood. I always have a good time playing there, they treat you really well, I’m looking forward to it!”.

Indeed, Jesika’s music defies categorization and covers a lot of interesting territory. Either the Bar Sinister show, or Jesika’s return to one of her favorite venues, Pappy and Harriet’s in Joshua Tree, where she will present her show along with a performance by Dengue Fever, should be noteworthy performances. The Pappy’s and Harriet show will be on February 14th. Make sure you have Nachos von Rabbit when you are at Pappy and Harriet’s, a dish suggested by and named after Jesika. Featuring new music from her upcoming Psychic Spice album, dancers and much, much more, these will be can’t miss shows from one of the most creative musicians around.

Ed is a native of Los Angeles who loves food and food cultures. Whether he's looking for the best ceviche in Colombia, the best poke in Hawaii, the best tequila in Jalisco or the best Taiwanese Beef Roll in Los Angeles, it's all good food! He also loves a good drink. He's had Mai Tais in Hawaii, Bourbon in Kentucky, Tequila in Mexico and Rum in Jamaica. His wine escapades have taken him to Napa, Sonoma, the Willamette Valley and the Santa Ynez Valley. And he's had beer all over the world! Music is another of Ed's passion, writing and interviewing many classic rock, rock and blues musicians. Getting the great stories of road experiences from them is a particular delight. Traveling also fits in with Ed's writing, exploring all over to find the most interesting places to visit, even in out of the way areas.
View all posts by Ed Simon →
This entry was posted in Miscellanious, Music and tagged Bar Sinister, Gram Rabbit, Jesika von Rabbit, Pappy and Harriet's. Bookmark the permalink.