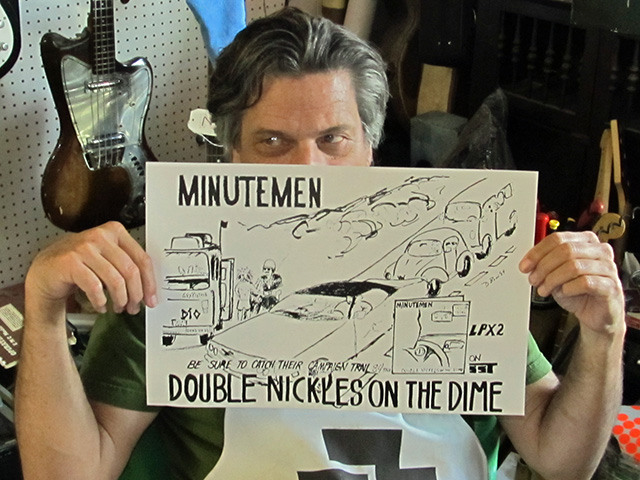 yesterday I stopped by guitar safari here in pedro and my old buddy dirk vandenberg had a reprint of a poster d. boon drew for the minutemen album “double nickels on the dime” release (even mentions the then upcoming “campaign trail ’84” tour). notice the creative way NICKLES (sic) is spelled. I’ve blown worse clams though. trippy factoid: dirk’s THE MAN who took the album’s actual cover photo, the one w/me at the wheel of my vw w/my eyes in the mirror, speedometer right at fiftyfive mph and ‘san pedro’ on a freeway sign showing through the windshield. he did a great job, had three shots and I think we ended up using the first one. only lame thing was when it was cropped at the label they took out part of the ‘o’ in our town’s name, damn. instead they should’ve cropped more the other side, the one w/nothing but the back of my baka head. oh well… you can see where d. boon drew us in our cars: him in his chevy impala he had for a bit, then me in my bug and georgie finally in his bus… the guy getting the traffic ticket on the port side is I think is dave-o who was a black flag roadie and wheelman so there’s a little inside humor going as well as letting folks know about the release. d. boon’s got a very distinctive style w/both music and art, I love it!