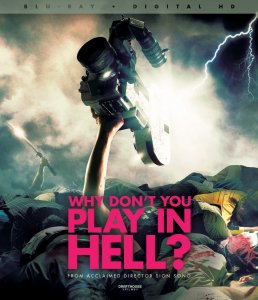 (2013, Drafthouse Films) Director Sion Sono’s frantic, brutal pigpile of trigger-happy movie conventions and tropes also manages to be an affectionate tribute to the joys and thrills of amateur filmmaking – no mean feat, as he manages to shoehorn both sides into a story about warring yakuzas, amateur martial arts, a jingle-singing juvenile performer turned fame-ravenous starlet and an over-caffeinated group of rogue moviemakers. In Sono’s world, movies and crime spring from the same go-for-broke creative urges, and work best sprinkled liberally with gouts of blood (and other bodily fluids) and lopped off limbs. “Why Don’t You Play in Hell” also has enormous energy and style and a lot of morbid humor, and should serve as notice (or reminder) of Sono’s exceptional reservoir of talent. The Blu-ray includes an interview with Sono (at what appears to be a Tower Records in Japan) and a foldout poster by comic artist James Callahan. 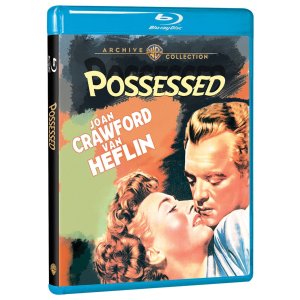 (1947, Warner Archives Collection) German Expressionism meets sudsy potboiler in this Warner Bros. vehicle for Joan Crawford, who earned an Oscar nomination as a women driven to insanity by her obsessive, unrequited love for the man (Van Heflin) who loathes her. Crawford’s descent into schizophrenia unfolds in heavy shadow by cinematographer Joseph Valentine, which accounts for why “Possessed” is frequently categorized as noir; it’s closer in both style and story structure to the blend of dark romance and psychological drama in “Mildred Pierce,” Crawford’s previous effort for Warner, with Heflin and Geraldine Brooks mirroring super-cad Zachary Scott and the venal Ann Blyth in that picture. Crawford’s white-knuckled performance is the engine that drives “Possessed,” and remains its key appeal for fans and first-time viewers of her work. The WAC Blu-ray has been restored to its original visual luster and includes extras from the 2005 DVD release, including commentary by USC film professor Drew Casper. 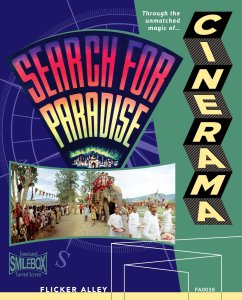 (1957, Flicker Alley) Lush and occasionally eye-popping journey through Asia circa 1957, as seen through the sprawling, three-panel Cinerama process. Broadcaster Lowell Thomas – who produced the Cinerama films with Mike Todd and Meriam C. (“King Kong”) Cooper – serves as narrator for this attempt to recreate the path of Marco Polo through regions of India, Pakistan, Nepal and Afghanistan. Aerial views of the Himalayas and treks through the jungles of Ceylon retain much of the natural wonder they inspired in Eisenhower-era audiences, though the attempts at goofball humor and musical interludes by Robert Merrill, as well as a long, long episode involving the U.S. Air Force, tend to stop the action cold. Still, “Search for Paradise” provides enough exotic and impressive vistas to surpass such minor shortcomings, and summon up the languid pleasures of watching the sort of museum-piece travelogues that unspooled between features in television’s distant, pre-cable past. As with previous Cinerama releases from Flicker Alley, the three-disc set includes a wealth of extras, including the original trailer, a restoration demonstration, a low-fi but interesting presentation of production stages for “Search,” and an impressive reproduction of the original program 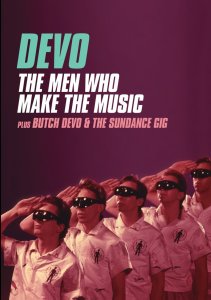 (2014, MVD) Originally released on VHS in 1981 as part of an intended series of “Video LP” on the DevoVision label, “The Men Who Make the Music” is enjoying its first official (read: legit) DVD release after years as a grey market staple. The film works best as a sort of holding pen for all things pre-fame Devo: concert footage from Devo’s 1978 tour intercut with early music videos (“The Day My Baby Gave Me a Surprise,” “Come Back Jonee”), several wonderful interstitial rant from General Boy and a sort of concept film about the band’s uncomfortable interaction with major label reps that played during intermissions on tour. Hardcore Devo followers have probably seen fragments or the whole thing in various formats over the years, so it’s a pleasure to have them all in one place and in decent shape to remind us of how much popular culture still needs to catch up with the band and its core concepts. Rounding out the disc is “Butch Devo and the Sundance Gig,” an hour-long reunion performance at the Sundance Film Festival circa 1996, which finds the band in fine form and more than a bit amused at all the crowd surfing in the audience. You also get live versions of “Gates of Steel” from 1980 and “Uncontrollable Urge” from 2003.

Paul Gaita lives in Sherman Oaks, California with his lovely wife and daughter. He has written for The Los Angeles Times, LA Weekly, Variety and The Fix, among many other publications, and was a home video reviewer for Amazon.com from 1998 to 2014. He has interviewed countless entertainment figures from both the A and Z lists, but his favorites remain Elmore Leonard, Ray Bradbury and George Newall, who created both Schoolhouse Rock and the Hai Karate aftershave commercials. He once shared a Thanksgiving dinner with celebrity astrologer Joyce Jillson, and regrettably, still owes the late character actor Charles Napier a dollar.
View all posts by Paul Gaita →
This entry was posted in Movies, Music. Bookmark the permalink.