‘Come Together’ Documents Nicely the Beatles Tribute Bands and Their Fans 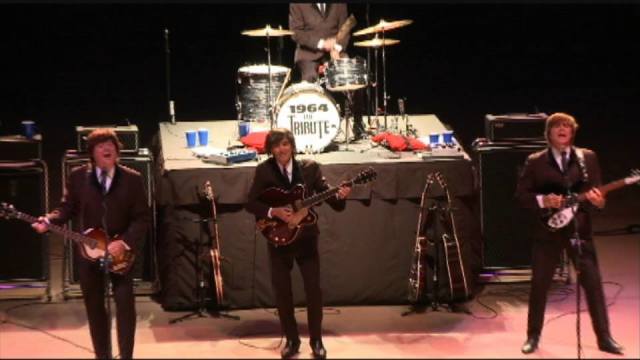 The Beatles hold a unique place not in just our musical history but our cultural history as well. A new documentary from Devolver Digital Films, Come Together, covers the role that tribute bands play in keeping the Beatles music alive on a global scale. Filmed primarily in and around Liverpool during International Beatleweek, the movie really shows the passion both the bands and the fans have for keeping the music and feeling of the era that the Beatles influenced. Scheduled for release through video on demand, the movie will be available on iTunes, Amazon Instant Video, VHX, Gumroad, PayStation, Xbox, VUDU, Vimeo on Demand, GooglePlay, YouTube Rentals and many more.

Directors Steve Ison and John Scofield have taken a look at the tribute bands from the side of the bands as well as the side of the fans. Adding an in-depth perspective to the movie is on-camera narrator Julia Baird, John Lennon’s younger sister. Steve Ison spoke about Julia’s role, saying, “I think it made it more interesting and more real. And then, part of it I had asked, ‘Would you mind taking us around some of the parts that you remember that were important to you?’. So she showed us around to John’s house and other places in town. We were at the place that John and Paul met and she said, ‘Well they really didn’t meet here’. So she walked us across to a graveyard, parted some bushes and said ‘it was more like here that they first saw each other’. Then she started telling the story and that was just amazing. So I think she kind of got into it too. She was really appreciative that we were doing something to honor them, not just something to cash in on”. 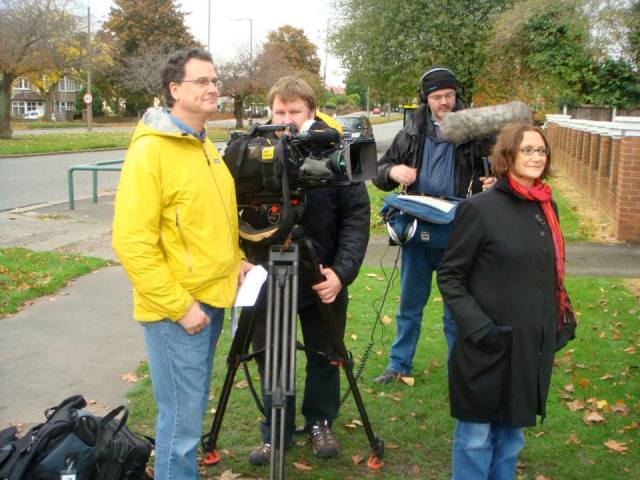 Steve Ison didn’t just produce and direct the movie on a whim. His attraction to the Beatles and their music goes way back. Steve said, “For me personally, I remember the first time I ever heard them, like a lot of kids, on the Ed Sullivan Show. I grew up in a small town in Kentucky. On my street alone, there were at least 2 or 3 bands, that could emulate, who tried to learn those 3 or 4 chords and the music was simple enough, yet complicated enough, that we could actually learn it and reproduce it and I think that had a lot to do with it. It was not only something you could listen to and admire, but kind of emulate yourself. There is something about it that it resonates”.

As Steve found out when filming Come Together, many generations are now tuning into the music of the Beatles. “We’d go out with our cameras from a very candid viewpoint”, Steve said, “and we met these three ladies, like a mother, a daughter and a granddaughter. We asked, ‘What are you doing here, what brought you here?’. The grandmother has been coming to this thing for 25 years, her daughter had been coming for 15 years and her granddaughter, this was her second one. The interesting thing they were talking about, it’s just generation after generation, the music really speaks to them”. He continued, “There was a young man who was standing there with his little hat, he was in a tribute band from I think the Czech Republic. And he said it was all about the Beatles and the sound, the universal appeal of the Beatles and their music. Everyone was excited about it, there were no cynical comments, we didn’t get anything like that.” 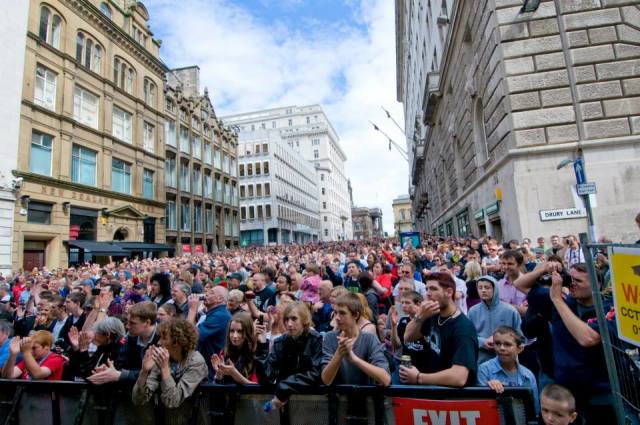 Watching the movie, it became easy to identify with the people they chose for interviews. It was less easy to identify with the love this myriad of musicians has for their job, partially since there are so few people in this world who allow their career to become all-consuming. As Steve commented, “It really was a rare occasion—-we ran into maybe one or two musicians—- that they weren’t just head over heels in love with the music. And particularly in Liverpool, all of them had that same ‘we are thrilled to be here’, they were so honored to be playing the music and make a living doing it. You never got the impression, although some of the more organized groups like Beatlemania, some of the more sophisticated tours might be, you never got the impression that money was Number One, but the music was Number One and the money was something they had to do to keep Number One going. That was really a predominant attitude as one of the guys in the film said, ‘that’s Mecca, it’s whatever’. And many of the guys feel like that”.

Of the bands that were chosen to appear in the movie, there was a wide range of ones that Steve and John chose from. “The guy who opened the door for all of this was named Bill Heckle. Bill Heckle is the owner of the Cavern Club along with another guy by the name of Davy Jones. The two of them have had the Cavern Club for 20-some years, and many many years ago, they thought it would be a good idea to have a Beatles Weekend, because tourists started coming over, particularly Japanese tourists, to ask about tours of the city and so forth. So we first talked to Bill Heckle and the event. International Beatle Week, is Bill’s. He said, ‘I’ll always had a big featured band, one or two of those. That particular year was the Fab Four that you saw in the documentary. They just blew us away. Then there was a group called Pepperland, from Scandinavia, that are just amazing. You really needed them. And then, he said, here are the diverse groups, some from South America, some are from Mexico, some are from……and it’s really amazing”.

Steve was really inspired by the fan’s love of the bands, saying, “when we’d shot the footage that we needed for these concerts, we would go by and say, “Let’s see what these guys are like”. Then we’d get a clip of that. Then we’d get these surprises or we’d run into people on Mathews Street and ask, ‘who are your favorite bands, who should we talk to?’. And we really asked a lot of those fans. Some of them were older people and some of them were younger kids, and that is how it kind of evolved”.

An important aspect that the film brings out is the history behind the Beatles and where they started playing. Steve said, “The first thing that hits you when you are in Liverpool and go down to the Cavern Club the first time, you’re just sort of mesmerized by the whole thing anyways. One of the dilemmas we had when we first went over to shoot was we knew we had to capture all these different bands. There were seventy-some bands, Beatles tribute bands alone for International Beatle Week. We went down to the Cavern Club and the first thing that hits you is the smell of beer and the extreme humidity and heat that hits you in the face like a wave, the minute you hit the bottom of the stairs. And then you go over and you see the bands and its really the whole atmosphere, it’s not just the bands performing that one particular time, but the atmosphere in the Cavern Club. We had a chance to talk to people who were there in those days, the late ’50s and early ’60s, and they said that’s exactly what it was like and that’s what we loved about it as teenagers, adults wouldn’t go down here, it was really our territory, our place. I was hoping I’d have that same sensation that those people had back then when they first went down there and saw the Beatles”. 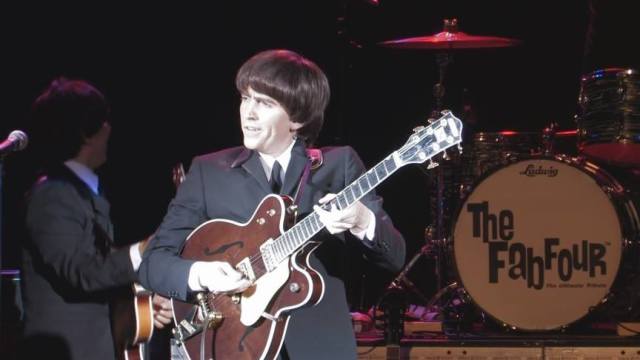 The movie itself is fast-paced and very well edited. Steve summed up his opinion of the passion the fans and tribute bands had by saying, “There is nothing underlying, noting cynical. It’s just simple and it’s just a positive, uplifting message. And everyone who is a Beatles fan, or anyone in these tribute bands, feels the same way. There’s a connection there, I guess is the best way to describe it”. Indeed, the movie leaves you with a few things. First, the appreciation of the Beatles and their universal popularity. Second, after viewing it, the movie inevitably leaves you singing, humming or whistling one of the many Beatles tunes. Even if you aren’t a Beatles fan, this movie will give you insight into one of the most interesting events ever to hit our culture.

Ed is a native of Los Angeles who loves food and food cultures. Whether he's looking for the best ceviche in Colombia, the best poke in Hawaii, the best tequila in Jalisco or the best Taiwanese Beef Roll in Los Angeles, it's all good food! He also loves a good drink. He's had Mai Tais in Hawaii, Bourbon in Kentucky, Tequila in Mexico and Rum in Jamaica. His wine escapades have taken him to Napa, Sonoma, the Willamette Valley and the Santa Ynez Valley. And he's had beer all over the world! Music is another of Ed's passion, writing and interviewing many classic rock, rock and blues musicians. Getting the great stories of road experiences from them is a particular delight. Traveling also fits in with Ed's writing, exploring all over to find the most interesting places to visit, even in out of the way areas.
View all posts by Ed Simon →
This entry was posted in Movies and tagged beatles, Come Together, Ed Simon, International BeatleWeek, tribute bands, video on demand. Bookmark the permalink.