Posted on February 3, 2015 by Billy Bennight 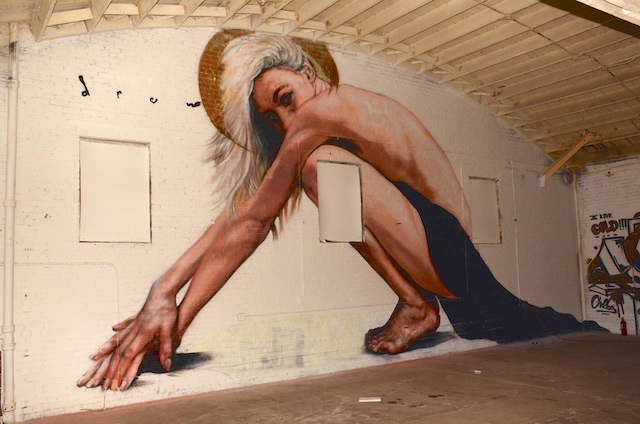 Photos By Billy Bennight for the Los Angeles Beat

Anyone who has followed the DTLA Arts and Warehouse District over these years are aware that this community offers unique and unexpected experiences. Cindy Schwarzstein heads Cartwheel Art Tours for the DTLA Arts community. The Cartwheel Art Tour exposes the meat and bones of the Arts District to the uninitiated and the curious who want to know the real “Downlow” of what’s shaking in that community; which is in a constant state of flux and has been experiencing phenomenal growth over the past few years. As part of LA Art Week Cindy put together a special and comprehensive tour for the press and for those attending Art Week at the Convention Center. 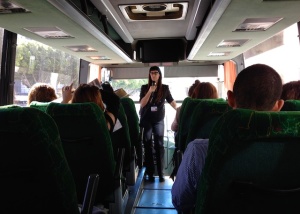 Our tour started in earnest at The Daily Dose where they were good enough to provide some DTLA Arts District hospitality with a delicious bagel and scrambled eggs for the tour to kick off our day in the right direction. From there we were treated to a personal introduction from Downtown Design League‘s Yasmina Cruz for an enlightening take on the custom design business and the nitch Downtown Design League has filled in the DTLA art community.

Yasmina is the founder and creative director of DTLA Face to Face that is the community page that showcases the Arts District artist and their work. We were further treated to a special talk from Yuval Bar-Zemer of Linear City Development, who has been a long time real estate developer in the Arts District. He was good enough to share his time and his residence overlooking the Arts District: which also has a splendid view of the DTLA sky line. He gave us an information packed talk on where the Arts Districts has been and where he believes it’s headed. He encouraged us to visit the roof of his residence. The roof had a lovely water fountain and garden area that is perfect for relaxing and entertaining. It proves behind all those austere, archaic and distressed brick exteriors of DTLA your digs provide stunning and vital feast for the eyes.

The excursion continued as we explored the Arts District’s murals. We had exited the bus by this time to walk amongst the street art that appeared on many corners with surprising regularity. We got up close and personal with mural works by Angelina Christina, This Means Mar, BIG Sleeps, DEFER, VYAL ONE, Noni Olabisi, Desire Obtain Cherish and RETNA. Steve Grody headed the discussion on the various local graffiti artist. Steve Grody, author of Graffiti LA, enlightened us on their styles, motives and the aesthetics that drove these artist’s works. The high point of this part of our adventure was the discovery of The Container Yard. This space is constantly changing and evolving as graffiti artist worldwide are invited to drop in and paint within this gated warehouse, inside a parking lot come courtyard, with whatever inspired them as they take paint to surfaces and walls. Special events and parties are regularly thrown at The Container Yard, reflecting the culture that is nesting and digesting Los Angeles through an international perspective. As we exited we happened upon Tristan Eaton painting the exterior of the building. Tristan was cordial and friendly with our group as he dropped form the lift he was painting from to answer question and explain his mural that was going up “Graffiti Style” on the exterior of The Container Yard. 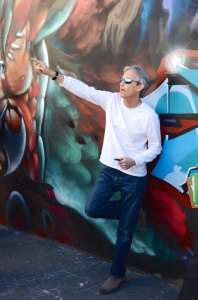 Stephen Seemayer at the American Hotel

The next stop was the American Hotel, once the home of the notorious and infamous Al’s Bar, where many Punk legends played, where some only lurked in beer soaked ignominy, while others emerged to popular accolades: they all shared the same dirty stage and graffiti filled walls and rooms. Stephen Seemayer joined us outside the American Hotel to tell the story of the building and all the side attractions that took place during the lowest period in the neighborhood: during those epic heydays of “Gutter Punk” extravagants of excess! I met Stephen a few months ago through my friend and artist Emmeric Konrad. I remember the Arts District from the early days as a patron of Al’s Bar. My romanceof the Arts District has been an on and off affair for 20 plus years. Stephen spoke of the area with authority and insight that only a few could offer. The group was transfixed as he spilled the beans on the escapades and shenanigans that welled up during those frothy early days in the Arts District. Stephen and I had one of those I know that you know that I know you know moments as the group broke from the American for the beer tasting at Angel City Brewing. I leave it to you all to imagine and surmise what all that could include!

Once at Angel City Brewery we were escorted in through a door that has never been available to me before. The entrance we entered into opened to a room of what was once the Roebling’s Sons Company of California Building. Angel City Brewery’s Keith Ely had 2 different beers ready for tasting as the group encountered this beautifully designed room harkening back to a different era. Keith rallied our group as all settled to hear the most interesting details of Roebling’s Sons Company history; which included the making of the steel rope that undergirds and binds the Golden Gate Bridge. We were given a tour of Angel City premises and heard Keith’s story his brewery’s emergence and its contribution to the Arts District. 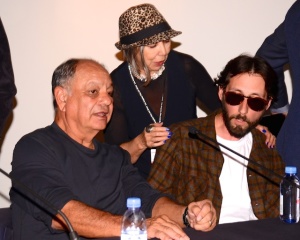 For the remaining part of the day the group was released to explore the LA Art Week’s exhibitions and was encourage to take in some of the panel discussions being offered. There were 2 panels of interest in the late afternoon for LA Art Week. The Mural Conservancy of Los Angeles (MCLA) had a panel called Public Art Land Grab: The Gold Rush Economy of LA’s Mural Renaissance and that was followed with Shana Nys Dambrot‘s panel discussion of “What is Public Art and Who is it For?”. MCLA’s panel discussion had the star power with Cheech Marin. This panel discussion had some tension that was alluded to by a snaky comment by David Brafman, of Getty, regarding the collecting couple Ed & Brandy Sweeney. That was unexpected and added a lot of heat to the talk that on the surface would lack a certain amount of contention. Cheech piped in with a “Good luck with that!” comment when the topic turned to keeping illegal graffiti and muralist from making a public statements and expressing themselves with their illegal art work. It was generally uplifting to hear how Los Angles is finding ways to support artist and their work in the public arena. Shana’s group followed with a lively discussion on public art and who is it for. Robbie Conal was the iconoclast amongst the group who deliverered some hilarious commentary and one liners that kept Shana and myself in stitches. Brad Howe and Rick Robinson gave their perspectives to art for the public. Margaret Bruning weighed in with what the city can do to support and sustain art in the City of Angels. Both panels offered perspective of what art can be in Los Angeles and how it can benefit the public at large. It spoke to what the Arts District’s artists can bring to the table to enlarge the focus of art in LA.

The Cartwheel Art tour clearly opened my eyes to the diversity and the aesthetic expanse that is percolating in the DTLA arts community. The LA Art Week panels focused on what can happen in LA and the influence the artists bring to the table for our city. If you’re wanting to receive a similar experience you can contact Cartwheel Art Tour for tour dates and times. You’ll get a good dose of history and expansive view of the art community in DTLA. The Cartwheel Art Tour is an experience I found more than worthwhile. 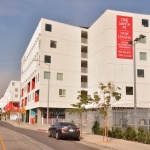 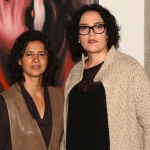 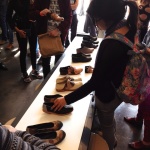 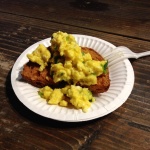 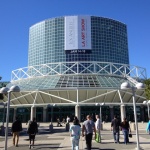 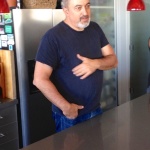 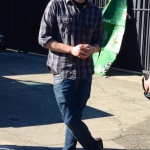 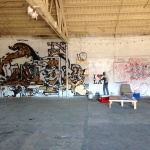 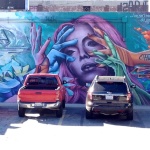 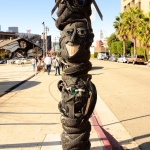 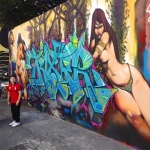 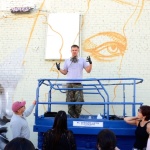 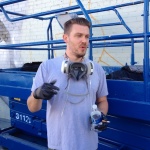 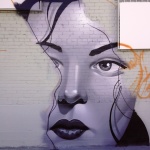 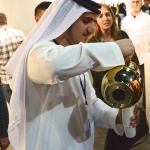 All images by Billy Bennight for the Los Angeles Beat

Billy Bennight is a writer, photographer and wardrobe stylist with expertise and years of experience in these disciplines. His musical youth started as a Punk Rocker and has expanded into exploring many genres of music, with an keen interest in art, fashion, photography and writing. He shoots celebrity events and red carpets for The Photo Access and ZUMA Press. He is a member of the Los Angeles Art Association. His images have been published in The Los Angeles Times, People Magazine, Wall Street Journal and Vanity Fair. He's very engaged in life. You can follow him on his Facebook page at: www.facebook.com/billybennightartist and on Instagram and Twitter @billybennight
View all posts by Billy Bennight →
This entry was posted in Art, Attractions and tagged Angel City Brewery, Angelina Christina, Art Week, Art. Arts, Arts District, BIG Sleeps, Billy Bennight, Cheech Marin, community, DEFER, Desire Obtain Cherish, DTLA, Emmeric Konrad, Graffiti, Graffiti Artist, LA Art Week, Los Angeles, Murals, Noni Olabisi, photography, RETNA, Shana Nys Dambrot, Stephen Seemayer, Steve Grody, This Means Mar, Underground, VYAL ONE. Bookmark the permalink.