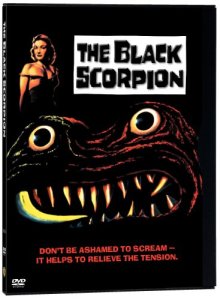 (1957, Warner Archives Collection) Volcanic eruptions south of the Border unleash a horde of gigantic, man-eating scorpions with designs upon Mexico City. This bantam-weight retread of Warner Bros’ previous big bug hit, “Them!” (1953), benefits hugely from the participation of special effects pioneer Willis O’Brien (“King Kong”) and Pete Peterson, who imbue their horde of monsters with unnerving energy and an almost fiendish glee in devouring the bit players (borne out by close-ups of the scorpions’ leering, drooling “faces”). The WAC DVD ports over great extras from the 2003 WB release, including Peterson’s test footage for two uncompleted projects, O’Brien’s dinosaur creations for Irwin Allen’s “The Animal World” and “Stop Motion Masters,” an affectionate tribute to O’Brien from Ray Harryhausen. Best of all, “The Black Scorpion” is presented in its original widescreen format. 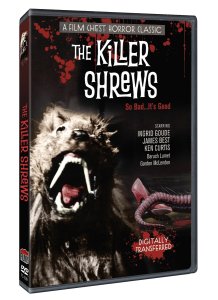 (1959, Film Chest) Well-intentioned genetic experiments by scientist Baruch Lumet (father of director Sidney Lumet) accidentally turn the test subjects – tiny shrews – into huge, ravenous monsters that threaten visitors to his island laboratory. Produced by and co-starring actor Ken Curtis (“Gunsmoke”), this staple of Saturday afternoon creature feature screenings suffers from the problems inherent to ultra-low-budget pictures: nonsensical dialogue, hit-and-miss performances and terrible special effects, most notably the use of domestic dogs in shaggy pelts to play the shrews in long shots and outdoor sequences. Having said that, “The Killer Shrews” is also fast-paced and even suspenseful in moments, most notably during a visit to the laboratory basement and an attempt to escape the island in corrugated tubs (!) that manages to be both ludicrous and exciting. The shrews’ goofy appearance is also tempered by the use of alarmingly toothy puppets for close-ups, which are punctuated by an unsettling, yammering vocal effect. It’s also only 69 minutes long – too brief to try the patience of camp fans and just the right length for omnivorous monster movie fans. Actor James Best, who plays the savvy captain hero, was a prolific character player who enjoyed late-inning stardom as Sheriff Roscoe P. Coltrane on “The Dukes of Hazzard.” A sequel of sorts, titled “Return of the Killer Shrews” and also starring Best, has been in production for years. 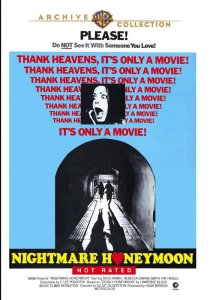 (1974, Warner Archives Collection) Grim, talky but atmospheric Southern Gothic about a newlywed couple (Dack Rambo and Rebecca Diana Smith) who stumble upon psychopath John Beck as he is committing a murder. Beck assaults Smith, spurring the previously mild-mannered Rambo to seek revenge. Neither mainstream fish nor grindhouse fowl, “Nightmare Honeymoon” plays as a sort of made-for-TV take on grimier ‘70s revenge pics like “Last House on the Left” (whose infamous tagline – “It’s only a movie! – was borrowed for this picture). It isn’t particularly thrilling or disturbing, and probably best appreciated by psychotronic completists, though the verbose Beck swings for the fences as the lunatic; his icky monologue about attacking Smith and a gaggle of curses seem to be the main difference between the widescreen theatrical version and the full-frame TV edit, which are both included on the WAC disc (the TV edit’s running time is also padded by extraneous footage). But some creepy Deep South locations and the presence of Pat Hingle in the supporting cast led credence to this rare feature film effort by Elliot Silverstein, whose eclectic c.v includes both the Oscar-winning “Cat Ballou,” the massively popular Sadean western “A Man Called Horse” and oddball cult titles like “The Car.” According to various sources, Silverstein replaced Nicolas Roeg (“The Man Who Fell to Earth”), who walked off the set after five days of shooting. 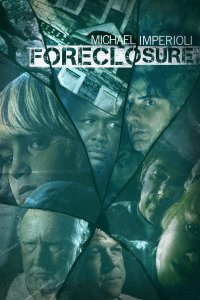 (2015, Virgil Films) Modest ghost story about a single father (Michael Imperioli) who moves into the home of a deceased relative with his son and aging father. In typical fashion, the house has a history of supernatural phenomena that has plagued its former occupants, and begins anew when the son discovers an old photograph in the basement. The picture distinguishes itself with a timely setting – the house is situated in a neighborhood depopulated by foreclosures and short sales – and by the cast, which includes the always-solid Wendell Pierce (“Treme”), but ultimately delivers nothing new to the haunted house subgenre.

(1980, Shout! Factory) This underrated black and bloody comedy taps into the gruesomely 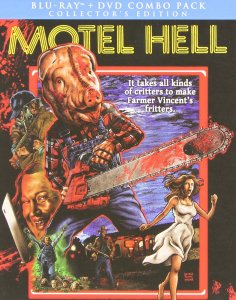 gleeful aesthetic of E.C. Comics for its story about sibling farmers (Rory Calhoun and Ida Parsons) whose world-famous sausages have a horrible secret ingredient. British director Kevin Connor aims for broad farce (though Grand Guignol is probably a more apt phrase), which transforms what might have been a minor camp/weirdo title (see: “Invasion of the Blood Farmers”) into a macabre live-action cartoon – “The Texas Chain Saw Massacre” as done by Chuck Jones and the Looney Toons crew. Along the way, he and writers/producers Steven-Charles Jaffe and Robert Jaffe take pot shots at evangelical preachers (played by Wolfman Jack), punk rock, suburban swingers and even organic farming. They don’t skimp on the gross, either, but the effects are less for the Fangoria crowd than to heighten the lunacy of the premise: how else to describe the climactic chainsaw duel, with one combatant wearing a huge pig’s head? Eagle-eyed TV habitués will note the presence of Paul Linke from “CHIPS” as the sympathetic sheriff and John Ratzenberger as the drummer for the ill-fated Ivan and the Terribles; Shout Factory’s Blu-ray includes lively commentary by Connor and the Jaffes, as well as interviews with Linke and cinematographer Thomas Del Ruth, and a vast array of production stills, posters and lobby cards.

Paul Gaita lives in Sherman Oaks, California with his lovely wife and daughter. He has written for The Los Angeles Times, LA Weekly, Variety and The Fix, among many other publications, and was a home video reviewer for Amazon.com from 1998 to 2014. He has interviewed countless entertainment figures from both the A and Z lists, but his favorites remain Elmore Leonard, Ray Bradbury and George Newall, who created both Schoolhouse Rock and the Hai Karate aftershave commercials. He once shared a Thanksgiving dinner with celebrity astrologer Joyce Jillson, and regrettably, still owes the late character actor Charles Napier a dollar.
View all posts by Paul Gaita →
This entry was posted in Movies, Television. Bookmark the permalink.