Unknown Artists’ “The Girl is Still Here”: A Superior Celebration of Songstressy! 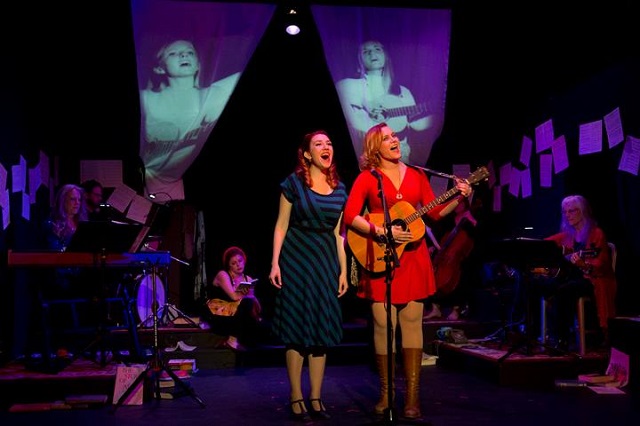 Picture Carole King and Joni Mitchell as a songstress/poetess duet; first in middle school, followed by womanhood, then into sage and wise goddesshood, throw in a slight flavor of Dixieland Jazz and you’ve got, The Unknown Artists’ Production of The Girl is Still Here.  This self proclaimed Song Cycle penned and composed by DeVorah Ross Johnsen and Gayle Leslie Bluemel follows the two women’s lives under the character names Debe and Gayle through  their youth to their womanhood, through their trials, tribulations, loves, break-ups, and ultimate co-creativity as a metaphor for the glue that holds their relationship together.

With one half of the stage dressed all in red to signify that of non-competitive team Debe and the other half draped all in blue to indicate the persona of Gayle, the stage is set for a cavalcade of competing conspicuous colors, demonstrative duets, meticulous musicianship. 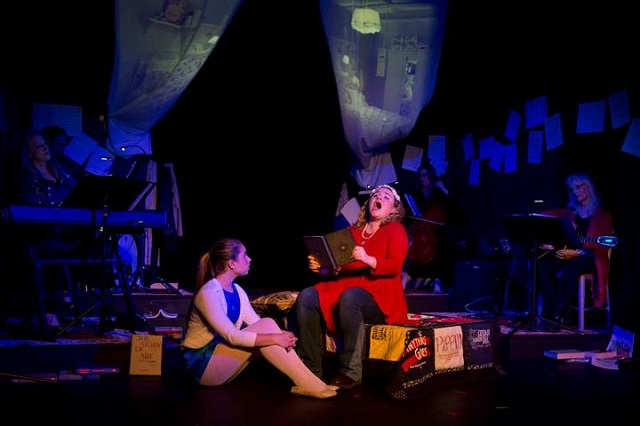 Opening on Debe the Girl and Gayle the Girl’s first meeting at the mercy of their Junior High classroom’s adjacent seating arrangements, they will bump into each other somewhat awkwardly, yet warmly introduce themselves to one another.  Once acquainted via a few sentences, Debe will declare, “Someday I’m going to write the great American Novel,” all the while in the same breath essentially admitting that she feels like a freak and writes to get all her awkward teenage emotions out.  Gayle will confess that she writes songs about this very thing and a lifelong collaborative companionship is born!  Following this, the last of the spoken dialogue will be witnessed as the song cycle begins in earnest and the toe tapping, knee slapping tunes bent to specify just how *here* the *girl still* is, commence. 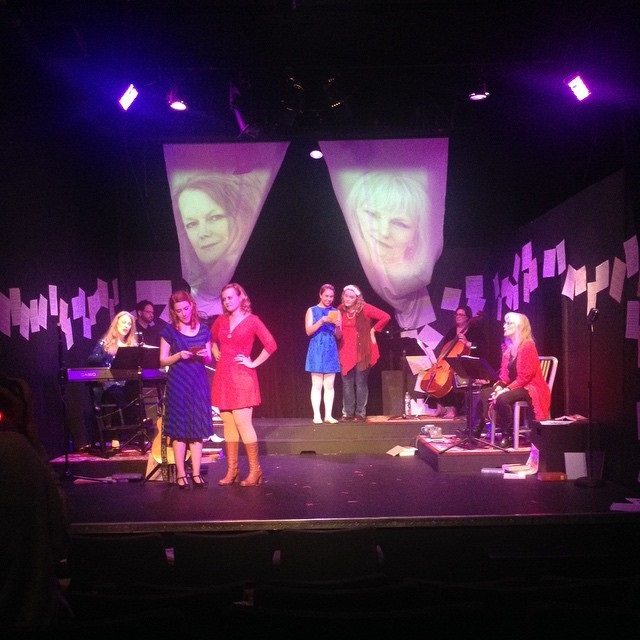 Photo Courtesy of The Unknown Artists

In the continuous vein of a rock opera (though really more folksy/jazz opera in most original form) songs that fuel the plot in particular include that of “Little Girl”, “Great American Novel”, “Butterfly Baby Grand”, “Some Pair”, “The Paris Song”, “Right Brain, Left Brain”, “Heart’s Desire”, culminating in “The Song”, the tune signifying the women’s ultimate collaboration as a musical duet fueled by their initial girlhood dreams:  “You taught me that words can be music, you taught me to harmonize!”

The musical extravaganza will take us through the women’s parallel and perpendicular life stories, from their awkward high school flirtations, to Debe’s well intentioned but ill-fated trip to Paris after attempting a more than dysfunctional relationship which is no less romantic in gay Paris (with the din of imagined accordion playing and the sounds of copious baguette eating in the background) than it would be in the mundane ol’ U.S. of A. let me tell you, to Gayle’s much healthier relationship back on the Western continental front to the women’s burgeoning passion for the art they will eventually embody in the most alluringly aural of senses. 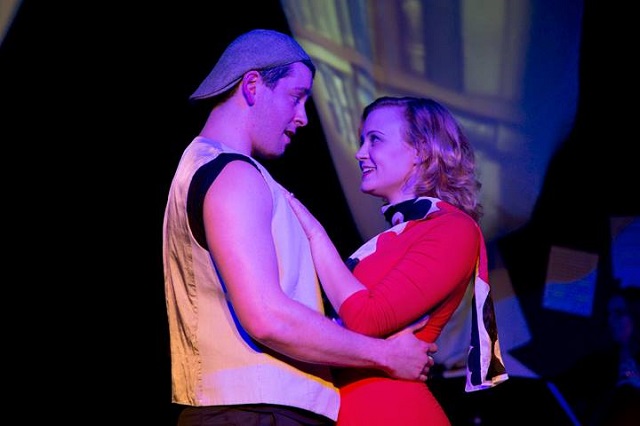 With varying talents playing all three ages of women/girls casting is impressive, skill-wise, in terms of musicianship, and pertaining to resemblance in all manner of genetic viability.  I could truly believe that Quinn Gearhart could have been a young Emily Clark morphing into Devorah Ross Johnsen as the sage Debe.  Oh and little not-so-random fun fact:  Ross Johnsen (as Debe the Sage to Clark’s Debe the Woman) just happens to be Clark’s mother in real life!  (As an aside, this is quite refreshing to be sure, considering that so often, in Hollywood in particular, one might quite often witness two hearty blonde-headed Swedes co-cast with a dark and swarthy Italian looking child is their offspring–with nary an intimation of any postman ringing the Mrs.’ proverbial bell once or twice–and all you can think, in most sing-songy fashion, is “Oh my… someone’s not properly doing their pre-production-Punnett squares.”)

Quinn Gearherart as Debe the Girl is enthusiastic and adorable and Danielle Wallius as Gayle the Girl, endearing and sweet.  Progressing on to the women, Emily Clark is strong as stunning as the form-fitting, red dress-clad Debe the Woman.  Katrina Rennells is lovely and lyrical as Gayle the Woman.  Debe the Sage sung and played by Devorah Ross Johnsen (on guitar) and Gayle the Sage portrayed and intoned by Gayle Leslie Bluemel (on keyboards) are striking and synchronized as our venerable senior versions of the twain and frontal band members keeping tempo and tune for the entire performance (and really, one can completely imagine watching both Joni Mitchell and Carole King while regarding the duo as they are just that earthy, warm, and wonderful.) 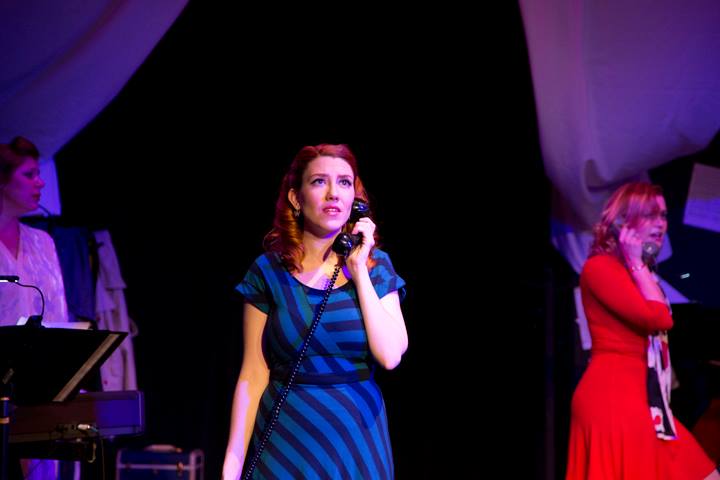 Jenny Martin is arresting and enjoyable to watch as our one female player and Lucas Alifano, goes from nice guy to jerk to average guy, to jerk again in the most wonderfully Jekyl and Hydeish of fashions as he will play every male in the piece in the form of conceited high school jock, to dysfunctional French boyfriend to supportive husband:  Ahoy, Hear hear and Holy Testosterone Trumpage Batman!!!

Michele Beauchesne on cello and Brian Boyce (and Emiliano Almeida on alternating dates) nicely round out the musical quartet!

The Girl is Still Here runs at the Dorie Theatre at the Complex until March 7.

For tickets and Information please visit:

Jennifer K. Hugus was born at a very young age. At an even earlier age, she just knew she would one day write for the LA Beat! Having grown up in Massachusetts, France, and Denmark, she is a noted fan of Asian Cuisine. She studied ballet at the Royal Danish Ballet Theatre and acting at U.S.C. in their prestigious BFA drama program. She also makes her own jewelry out of paints and canvas when she isn’t working on writing absurdist plays and comparatively mainstream screenplays. Jennifer would like to be a KID when she grows up!
View all posts by Jennifer K. Hugus →
This entry was posted in Theater and tagged musical theatre, Playclub West, Song Cycle, The Girl is Still Here, Unkonwn Artists. Bookmark the permalink.