Deep in the Media District of Glendale, an unassuming building holds the broadcast studio for LuxuriaMusic.com. The most important thing about the station, however, is not the equipment, but the people who sit at the console and pump out a rarity these days—-live, free-form eclectic radio. LuxuriaMusic is one of the new legion of Internet only radio stations that are bringing back the days when live shows, run by DJ’s who were experts in their music, were the choice of listening for the person who wanted more than just the top pop tunes or the same 50 classic rock groups. LuxuriaMusic specializes in an eclectic line-up of shows, most centered around “deep tracks” of the ’50s to ’70s. Wednesdays are a great day though, to explore much more, when the DJ’s cover everything from 1920’s jazz recordings through ’50s tiki music, 1960’s psychedelics and more.

Kat Griffin wears two hats at LuxuriaMusic.com. “I’m the Program Director”, Kat said, “and host of Madly Cocktail (5pm Wednesdays). The reason why I do this is that I come from radio. I worked in public radio for 25 years and public radio became something—-it used to be this cool thing, where like-minded people met who loved music and everyone was welcome at the table, at least during the discussion. Now it’s the kind of elitist, ‘you’re not invited to the party’ kind of atmosphere you get. I started at KCRW and that’s what I got, so when I discovered Luxuria, I discovered what I was looking for in public radio, which was that community of people who are into music and who are into communicating about music”.

Kat continued, “I come from a radio background and that’s what I’m most interested in. That’s what it morphed into was that my experience from radio was valuable, fund-raising and organization to the station and people said ‘OK, let’s let her do this’, so they’ve let me lead , which is nice, and I am very honored and humbled by that. We have a really great group of creative people who do great shows because they are given the freedom to do great shows. As people discover us, everyone is always amazed that we’re even here because nobody does this any more, where everybody just pours their heart and soul into a project but doesn’t expect anything in return. All we get in return is the love and care of each other and the music and the people we communicate with about it”.

Kat’s labor of love is her show, Madly Cocktail. It’s an eclectic mix of cocktail and vocal jazz, Latin soul and big band music. It is the kind of show that calls for a big overstuffed chair and a proper martini. A glass of champagne or an Irish coffee will also put you in the mood for lounging around while listening to Madly Cocktail. Quincy Jones, Mongo Santamaria, Peggy Lee, Cal Tjader and Sarah Vaughan are just some of the artist that provide a touch of class to an evening (or a weekend morning, complete with mimosa) for a discerning music fan’s listening pleasure. 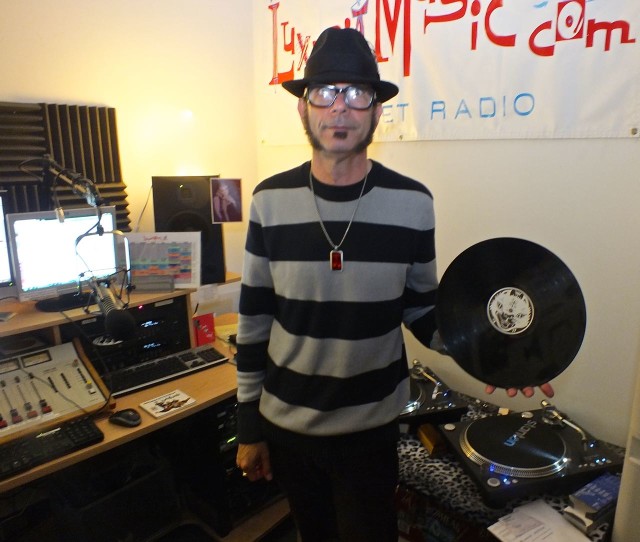 Wednesday’s eclectic lineup starts at 3pm with Lee Joseph’s show Over Under Sideways Down. DJ Lee runs a completely different themed show each week, culling the music from his vast collection of original vinyl recordings and CD’s. “Well I’m a bit eccentric because I can be all over the place. I’d say a lot of my taste is mid-century, but like today I did an electronica show. I love punk rock. I jump around to different genres, although I think that everything I really love is inspired by the ’60s, whether it be the early ’60s frat-surf era, the mid ’60s garage era or the late ’60s psychedelic era. I think all the music I love from eras after that have huge inspiration from those roots”.

Along with his musical selections, Lee often has guests in-studio ranging from musicians he has worked with on Dionysus and Bacchus Archives releases to various above and underground local pop-culture luminaries. Lee prides himself on the fact that his tastes and library are so wide-ranging that he can’t recollect playing more than a handful of songs more than once over the four years that Over Under Sideways Down has been on LuxuriaMusic.com. Jogging his memory, he thought that he might have actually played Mott the Hoople’s cover version of Lay Down (Candles in the Rain) three or four times since the show has been on. 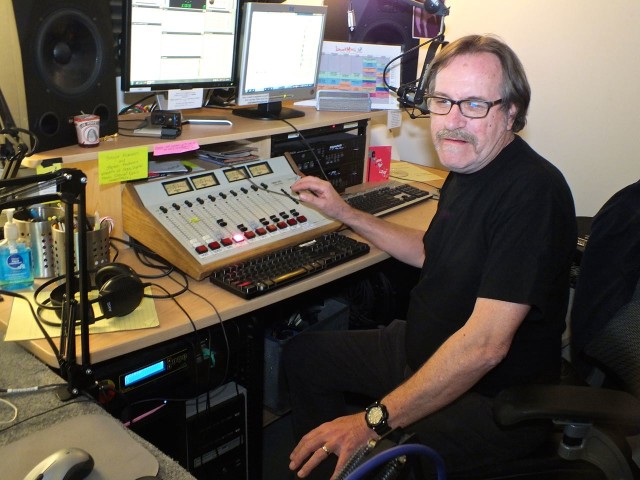 Gary Schneider parlayed an interesting hobby into a profession. Since the mid-1970’s he has been collecting air-checks, which are recordings of radio broadcasts. His company, Open Mynd Collectibles, was established in 1992 to buy and sell them and has become a noted source for information on the subject, referenced in many books, documentaries and CD liner notes with his knowledge of radio broadcasts of the ’50s and ’60s. “I’ve been collecting radio air-checks for the last 40 years, even though I’ve really only gotten into them in the last 15, ever since the digital revolution. My radio show is based around radio air-checks and it puts you in a time warp that TV broadcasts can’t do. When you listen to old radio broadcasts from back then, you have things like car commercials, news broadcasts, what was happening that particular day, whether it was the Vietnam War, some union strike going on in New York or whatever was going on. You have commercials for grocery stores, where beef may have been twenty-nine cents a pound or whatever it was, ridiculous prices! You’ve got the products back then that you don’t get from just watching an old TV broadcast because the commercials are all updated when you watch TV, while an air-check has those vintage commercials left in. It’s hard to describe, but you drift back into that time frame, that time zone”.

Gary, whose show, Open Mynd Excursion with Gary Schneider, runs from 9 t0 11pm on Wednesdays, continued, “I can be driving in my car, playing an air-check from the ’60s and thinking, ‘some of these songs I hated back then!’, but when you hear them now, it’s a totally different context. It’s like, ‘This is such a cool song’ and you give it a little more credence than you did back then. Either I have the time now to enjoy it, or it’s for a more nostalgic purpose, or just the fact that it wasn’t such a bad song, but when you were younger, you hated that stuff, but now that you are older, you give it more of a chance than you did back then. Then of course you get the commercials right after that and then the DJ that come on are talking about the current fads that are going on at the time, and I can start looking around picturing buildings that were around at the time, looking at others and saying, ‘I wonder what that was in 1966?’, so you start drifting back in a time frame. It’s almost euphoric, in a way, it’s amazing. The reason why I present these on my shows is that I like to give that image to other people, so they come back with the same stories I’m telling you right now, about what they got out of it. We can talk and say to each other, ‘yeah, that’s exactly what I got’, A lot of listeners start off wanting to hear only their local stations, but I tell them to branch out, go to a city you’ve never been to before, and you can listen to what was going on there. Then you can start to image and say, ‘what was that small town like?’. You can listen to the type of music they play there, even though it’s a Top 40, it’s still different than what we heard here, or in the local town that you grew up in. It’s just a unique experience, it’s hard to put into words 100%, it’s a feeling you get. It’s amazing and a lot of fun!”.

“I like hearing stuff I’ve never heard before, from eras I’m fascinated with”, Lee said, on his listening to fellow DJ Gary Schneider’s show. “The radio in the ’60s wasn’t so regimented, so you can hear things from different regions. You play something from Oklahoma and you can hear things from a local band that maybe never made it big”. Gary chimed in, “Maybe you hear a song on an air-check and being a record collector, you hear a song from your collection that got airplay there 20 years ago and say to yourself, “Wow, they played that song there!”. Gary continued, “Or else some of the time you’ll hear a local song on a far-away station and, knowing that it was just a local record or a limited pressing, are surprised that they were playing that in such a different area”. It’s this interplay between the DJ’s at LuxuriaMusic that shows their love for the music and their desire to always learn more about different locales, different music and different eras that work with their favorite subject.

Ian Whitcomb has brought years of musical entertainment to his show on LuxuriaMusic.com. In the ’60s, he was part of the British Invasion, with his hit songs You Turn Me On and Where did Robinson Crusoe Go With Friday on Saturday Night? Later, he became an author and record producer and won a Grammy Award in 1998 for his recreation of the period music played aboard ship in the blockbuster film Titanic. At LuxuriaMusic.com, his show on Wednesdays from 7 to 9pm, featuring Big Jim Dawson, specializes in classic jazz and music of the ’20s and ’30s. Jim  specializes in vintage music of another sort, early rockabilly and early rock ‘n roll. They exchange sets for an eclectic mix of great tunes. Usually rare, always interesting, their vast knowledge of the music of the first half of the 20th Century provides a great show for aficionados of vintage music.

LuxuriaMusic.com has made it easy to enjoy the shows, which tend to be another rarity in radio these days, live broadcasts with streaming audio. This also accounts for the wide listenership of the station, which is not just local but global in access. They are also able to be listened to later as podcasts, but the spontaneity of a live show combined with the eclectic music choices and free-form radio make Wednesdays a meal for the ears that is intended to be savored.

Ed is a native of Los Angeles who loves food and food cultures. Whether he's looking for the best ceviche in Colombia, the best poke in Hawaii, the best tequila in Jalisco or the best Taiwanese Beef Roll in Los Angeles, it's all good food! He also loves a good drink. He's had Mai Tais in Hawaii, Bourbon in Kentucky, Tequila in Mexico and Rum in Jamaica. His wine escapades have taken him to Napa, Sonoma, the Willamette Valley and the Santa Ynez Valley. And he's had beer all over the world! Music is another of Ed's passion, writing and interviewing many classic rock, rock and blues musicians. Getting the great stories of road experiences from them is a particular delight. Traveling also fits in with Ed's writing, exploring all over to find the most interesting places to visit, even in out of the way areas.
View all posts by Ed Simon →
This entry was posted in Interviews, Miscellanious, Music and tagged eclectic radio, Ed Simon, free form radio, Gary Schneider, Ian Whitcomb, internet raidio, Kat Griffin, Lee Joseph, LuxuriaMusic, radio. Bookmark the permalink.