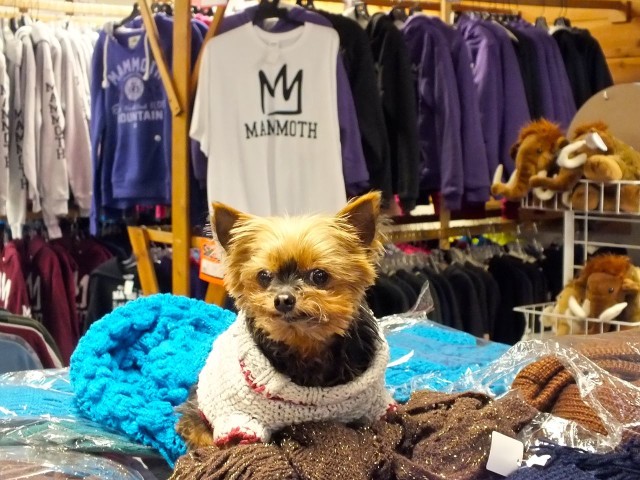 Lacy at Another T-Shirt Shop. Photo by Ed Simon for The Los Angeles Beat.

Mammoth Lakes, nestled in the Eastern Sierra Nevada Mountains and a reasonable drive north from Los Angeles, has two distinct seasons—-winter and summer. Some years summer comes in July, while other years, like this one, it comes a lot earlier. So what do you do in Mammoth in a year like this, when you have a condo rented for skiing and there is no snow? Ski slopes are closing down but it is too early for the traditional Mammoth summer sports of fishing and swimming. Well, fear not, there is plenty to do in this early transition period between seasons, so you can go to Mammoth now and still have a great time.

Photo essay at end of article

Brian Ellison makes sure that people who visit Mammoth can have fun all year round. As proprietor of Brian’s Bicycles & Cross Country Skis, he follows the ebb and flow of the seasons very closely. “I started the shop in 1976. During the winter, we’re exclusively a cross-country ski shop. Our cross country ski center closed down already for the season, which is the earliest I’ve ever seen it close down, and I’ve been doing this a pretty long time. Once that closes down, there’s really not another place to go cross-country skiing around here. Now the bike season is starting to ramp up, whether it is the commuters in town who use their bikes all winter long, which is why I still have a bike stand in here, people coming up for vacation and coming up here with their bikes. Right now, it’s starting, kids get on their bikes, and the road riding in Mammoth, which I think is really world-class, now people are starting to ride their road bikes. And as the terrain starts to open up, from about here on down in elevation, this is where people are mountain biking. There are too many patches of snow still to mountain bike further up”.

Brian told me about his favorite place to go mountain biking. “I like going up around the Inyo Craters”, Brian said. “I can literally start right here at my door, do that, do a few other things, it takes a couple of hours. The season is ramping up, the clubs are getting going. There’s a ride this weekend out of Bishop, East Side Velos, a road riding club in our area. As you see, the last two guys that came in here weren’t talking skis, they were talking bikes, it’s definitely getting going in the area. People can still Alpine ski on the mountain, although that’s starting to close down soon, but then you can always go down to Bishop and play some golf!”.

One of the not-so-well-known treats in the Mammoth area are the hot tubs. Mammoth is located in an area filled with hot springs and several people in the past have created areas where visitors can go for a good soak out in nature. One area, appropriately just named ‘Hot Tub’ or sometimes ‘The Tub‘, is less than a 20 minute drive from central Mammoth Lakes. Even with snow still capping nearby Mammoth Mountain, people love to come out and luxuriate in the Hot Tub’s 100 plus degree water. The road once it leaves US 395 is paved for less than a mile, but the dirt road to ‘The Tub’ is graded and accessible for cars and even RV’s. Expecting the place to be deserted, I met a man named Craig relaxing in the tub who had driven from San Jose to enjoy the clean, warm waters while also enjoying the 360 degree views of the mountains and upper deserts. Along with his dog, he was using the day to decompress and just enjoy the beauty that is the Mammoth area.

Out on Old Mammoth Road, the Snowcreek Athletic Club caters to locals and visitors alike. As the season changes, visitors to the club can start enjoying amenities such as their outdoor tennis courts. For those occasional days when it is still too cold for tennis or outdoor swimming, Snowcreek has a complete gym setup including weights, exercise machines, squash and basketball courts and even pool tables. Samuel Yamada, one of the staff at the club, said “We have the tennis nets up now so they’re playing tennis, we have a trampoline section back here where the kids all play on the trampoline, we have lots of different physical fitness classes. We also have some chairs out on the deck here now because its been so warm. We have over 33,000 feet of athletic enjoyment here. With basketball, swimming and jacuzzis, there’s a lot to do around here”.

The Bistro East, known as one of the best restaurants in town, occupies part of the Snowcreek Athletic Club, giving guests a place for cocktails, beer and wine along with sushi and a delicious food menu after they’ve worked out or after a few sets of tennis. Sam put in a good word for the restaurant, saying , “The restaurant opens at 4:30, it’s called the Bistro East, mostly sushi. People have said it’s the best in town!”. Samuel also talked about one other popular Mammoth spring and summer sport, saying, “ We have a lot of runners around here, a lot of marathon runners. As a matter of fact, Matt [Tegenkamp, runner and U. S. Olympian] is coming back here this week to train for the Boston Marathon”. Samuel also mentioned that they have a full day spa for those who want massages, facials and other of the more relaxing pleasures to enjoy.

Another T-Shirt Shop also covers all the seasons up at Mammoth. Marty Shapiro, who operates the shop in central Mammoth, assisted by his dog Lacy during the quiet winter season, is gearing up for the influx of visitors to Mammoth for the early spring and summer seasons. “People are now coming up before Memorial Weekend when before they used to come up around the 4th of July. Mammoth has five different music festivals, beer festivals, wine festivals, art festivals, food festivals, a Tequila Fest. There are reasons every weekend for coming into this town besides hiking, biking, camping, fishing and the normal summer sports. They’re coming up each weekend for fun times and loving it!”. Marty added, “I do carry hoodies and t-shirts year ’round, in the summer time I carry more tanks and the designs are a bit different, with fishing, camping and hiking motifs as opposed to skiing and snowboarding and winter motifs”. 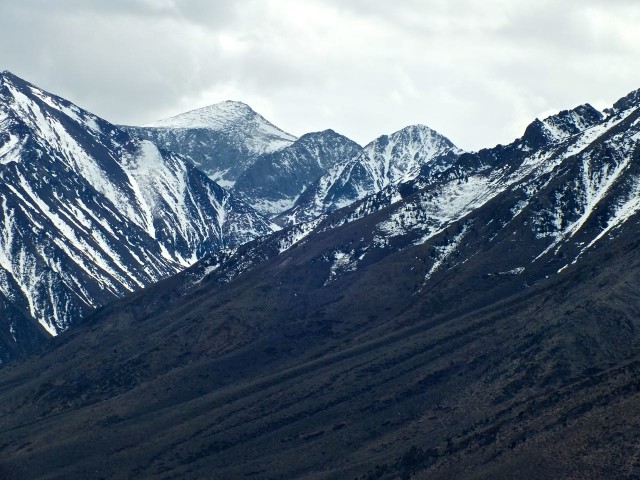 Snowcapped mountains in Mammoth. Photo by Ed Simon for The Los Angeles Beat. 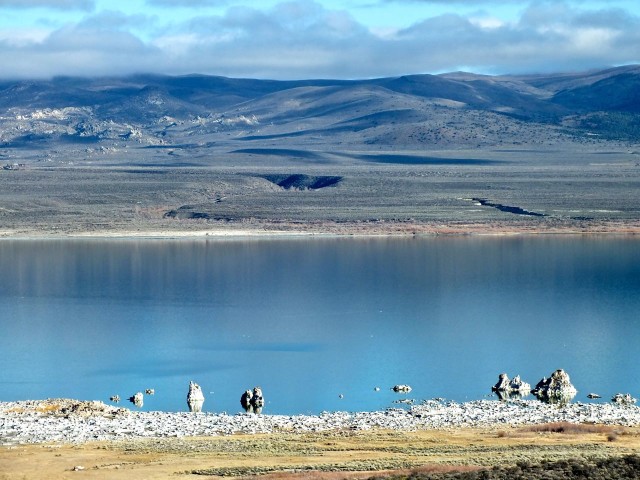 Tufa at Mono Lake.Photo by Ed Simon for The Los Angeles Beat.

One of the best things about starting the spring/summer season early at Mammoth is that Mono Lake, with its beautiful tufa formations jutting out of the lake, is opening early this year. Cassandra Dufek, bookstore manager at the Mono Basin and Scenic Area Visitor Center, is happy that the season is starting early. “This year we are opening a little early, but we do tend to open before the [Tioga] Pass opens. There are other things that are already open. Whitney Portal is open, Schulman Grove is open in the White Mountains. That opened early and it looks like the passes will probably open the same time as last year”.

Cassandra talked about the lake, saying, “Mono Lake is special, you have the tufa, the calcium deposits that are the crazy, bizarre looking rock formations, the brine shrimp and the alkalai flies. It’s a very high salt-content lake and has two islands, Paoha and Negit in the center, that are very distinct formations. There was an underwater volcano at one point, so on the north end there are some really cool formations called the Black Fissures that are really interesting to visit”. Cassandra arguably has one of the most beautiful places around to work at, with the wide glass windows of the Center giving an expansive view of the lake and the mountains, still snow-capped, beyond. “There’s a guided tour on the south end, South Tufa. There’s the Bird Chautauqua Festival coming up on June 21st, there’s always really interesting species to be seen through this corridor. The Center is now open Thursday through Monday and when the Pass opens, we’ll be here seven days a week”

No matter what season it is, some people’s favorite sport is shopping. Mammoth Lakes has the perfect place to shop no matter what the season and that is the Mammoth Luxury Outlets. Between the Polo, Ralph Lauren, Van Huesen and Bass outlets as well as the Value Sports shop, there are some great deals to be had whether you need new hiking boots, a parka for next season or a tuxedo shirt or purse for those summer dress-up evenings. With a cafe, a coffee house and even a wellness clinic, there is plenty to do for those who want a day of shopping with a side of relaxing in Mammoth.

Sure enough, the weather I had up in Mammoth last week was gorgeous. One evening it snowed, leaving a few inches on the ground that evoked winter, but it melted a few hours later to bring out a nice day for hiking the Sherwin Lakes Trail in a t-shirt and Levis. So for those lucky enough to make it up to Mammoth in the next few months, before the summer tourist season begins, know that now is the best of worlds up at Mammoth Lakes. From the ride up US 395, where the highway is surrounded by not only the usual desert scrub, but now by bright yellow patches of wild mustard, white flowers and trees coming into bloom, to just walking around Mammoth Village for fun, now is a great time to see the Mammoth most people rarely get to enjoy.

The Hot Tub
Info and directions 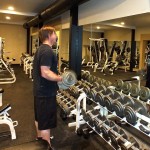 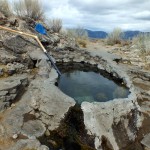 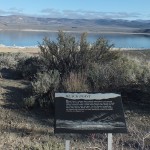 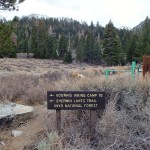 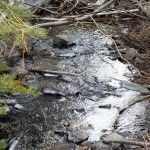 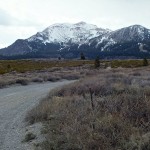 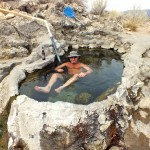 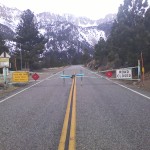 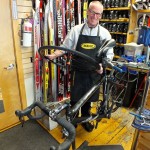 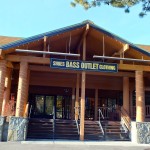 Ed is a native of Los Angeles who loves food and food cultures. Whether he's looking for the best ceviche in Colombia, the best poke in Hawaii, the best tequila in Jalisco or the best Taiwanese Beef Roll in Los Angeles, it's all good food! He also loves a good drink. He's had Mai Tais in Hawaii, Bourbon in Kentucky, Tequila in Mexico and Rum in Jamaica. His wine escapades have taken him to Napa, Sonoma, the Willamette Valley and the Santa Ynez Valley. And he's had beer all over the world! Music is another of Ed's passion, writing and interviewing many classic rock, rock and blues musicians. Getting the great stories of road experiences from them is a particular delight. Traveling also fits in with Ed's writing, exploring all over to find the most interesting places to visit, even in out of the way areas.
View all posts by Ed Simon →
This entry was posted in Attractions, Events, Fashion, Food, Health and Beauty, Interviews, Miscellanious, Photo Essays, Upcoming Events and tagged Another T-Shirt Shop, biking, Brian's Bikes and Cross-Country Skis, Ed Simon, June Lake Brewing, Mammoth Lakes, Mammoth Mountain, Mono Lake, skiing, Snow creek Athletic Club. Bookmark the permalink.