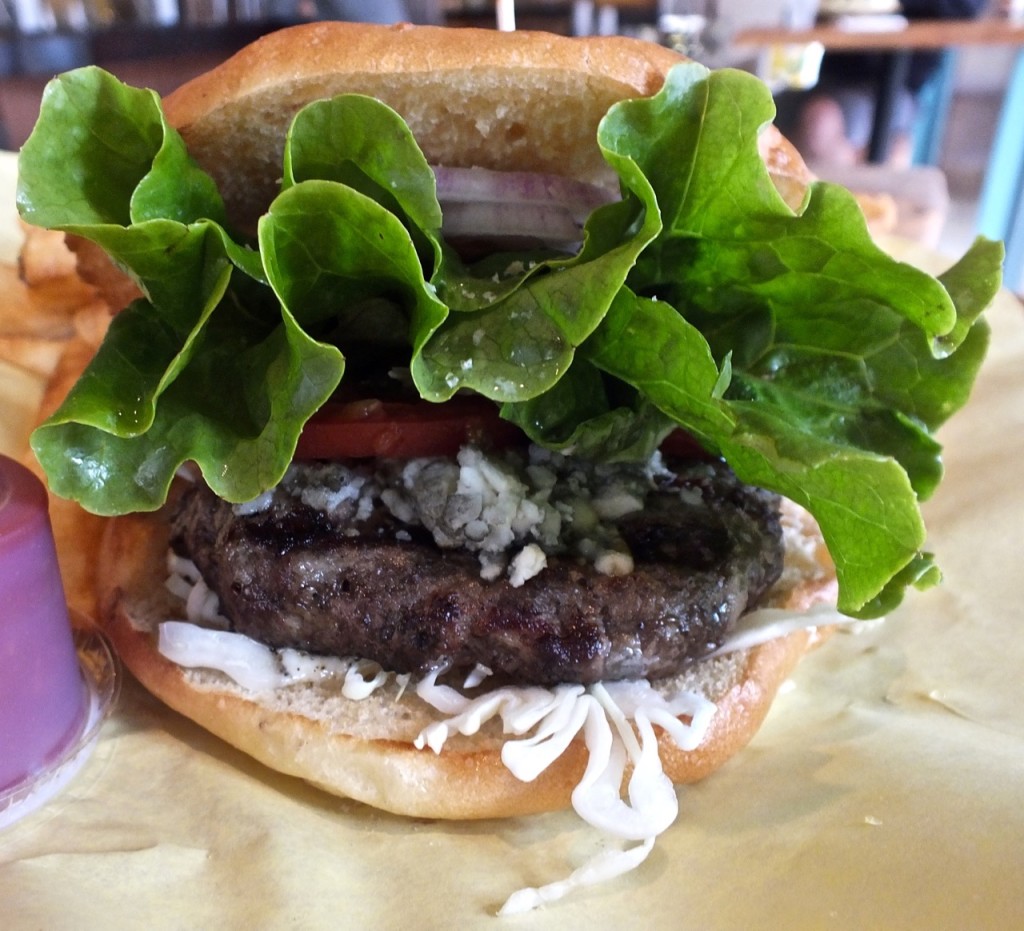 There are hamburgers, and then there are hamburgers. In France, the upscale version of a hamburger is called steak haché, or chopped steak. At Mick’s Karma Burger in Irvine and its sister establishment, HachéLA in the Silver Lake District of Los Angeles, owner Mick has taken the burger and elevated it to one of the best, tastiest burgers around. This is not your average ground beef patty, but instead a steak haché made out of all natural, 100% ground Angus sirloin. Right there comes the difference in taste, with an excellent flavor in the beef that is way above the taste of most other burger places.

Michael Schepers, or Mick as he’s known to most people, takes his burgers seriously. The meat is ground fresh, but mornings are not spent shaping patties and throwing them into the fridge for use later on. Instead, each steak haché is hand-formed after the order is placed so the meat maintains its juicy flavor and excellent texture. It is thick enough to enjoy and perfectly grilled, coming out in that magic spot between medium rare and medium that is just right for maintaining juiciness and texture. 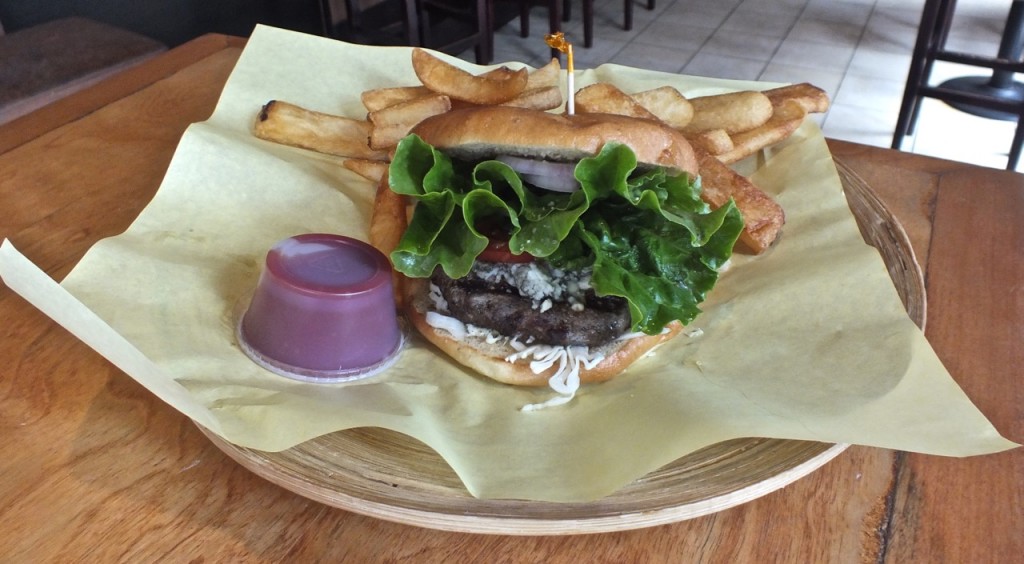 With so much care that Mick takes in order to perfect that patty, it would be a shame to mask it’s flavor or worse, to hide it in a big, chewy bun. Mick has stated that ‘it’s a burger and as such, the burger patty should be the star’. This he does by first of all getting a custom-baked bun, light and a perfect size for the patty. Mick then gives a choice of toppings for the burger, but applies them with a deft touch so they don’t overpower the subtle beefiness of the meat. The result is one of the best burgers in Orange and Los Angeles Counties, made with top line ingredients and yet reasonably priced. 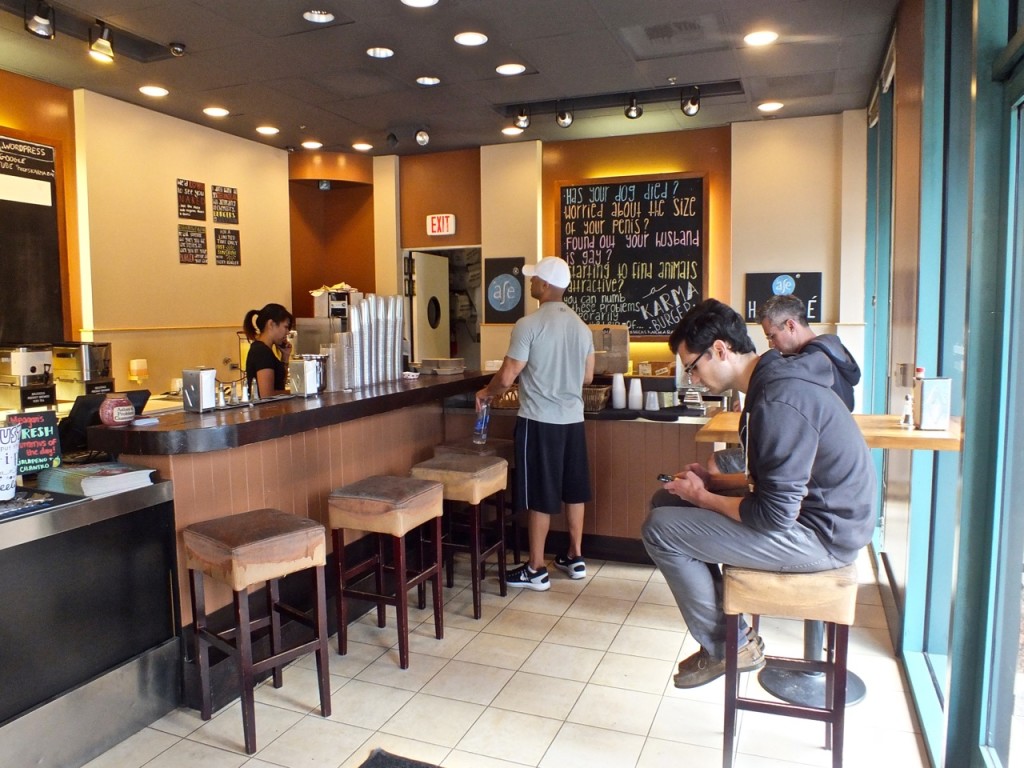 The Karma Burger is the basic burger at Mick’s and is a nice way to see what Mick can do with the standard American masterpiece. The patty sits on top of Mick’s Karma Sauce, a variant of Thousand Island Dressing that has just enough spices in it to elevate the Karma Sauce to a delicious topping, while being applied in just the right amount so it accents the patty rather than drips all over. Lettuce,a slice of Roma tomato and thinly sliced red onion top the patty, while a simple slice of American cheese finishes the burger off.

For people who want a burger with some “warmth”, the Habanero Burger certainly fills the bill. Four different types of chilis are smoked, making what is known in Spain as escalivada. The escalivada tops the burger, adding some nice heat, although not too much so it masks the flavor of the patty. Garlic mayo provides taste and moisture, while queso fresco, a crumbly, slightly salty-sour Mexican cheese adds marvelous flavor. Again, the tomato and lettuce add texture and taste in a subtle way to the burger. Taste wise, this burger is excellent, spicy enough to make lovers of hot food happy while not being too hot in order to allow the flavor of the meat to shine. This was an excellent burger with well-matched flavors.

Another exceptional burger was the Karma Onion Swiss Style Burger. Sauced lightly with a tomato mayo, the burger was topped with sweet, caramelized onions. It was obvious by their taste that the cook had not taken any shortcuts with the onions, slowly cooking the onions over low heat until they were well-browned with a decidedly sweet taste that only that process can yield. A nice slice of Gruyere Cheese, popular for its slightly nutty flavor and its excellent melting quality, topped the burger. Again, the tomato and lettuce accented the burger nicely. As with the other burgers, the flavor of the meat stood out, with the balance of the burger just perfect. This burger could easily become a steady habit. 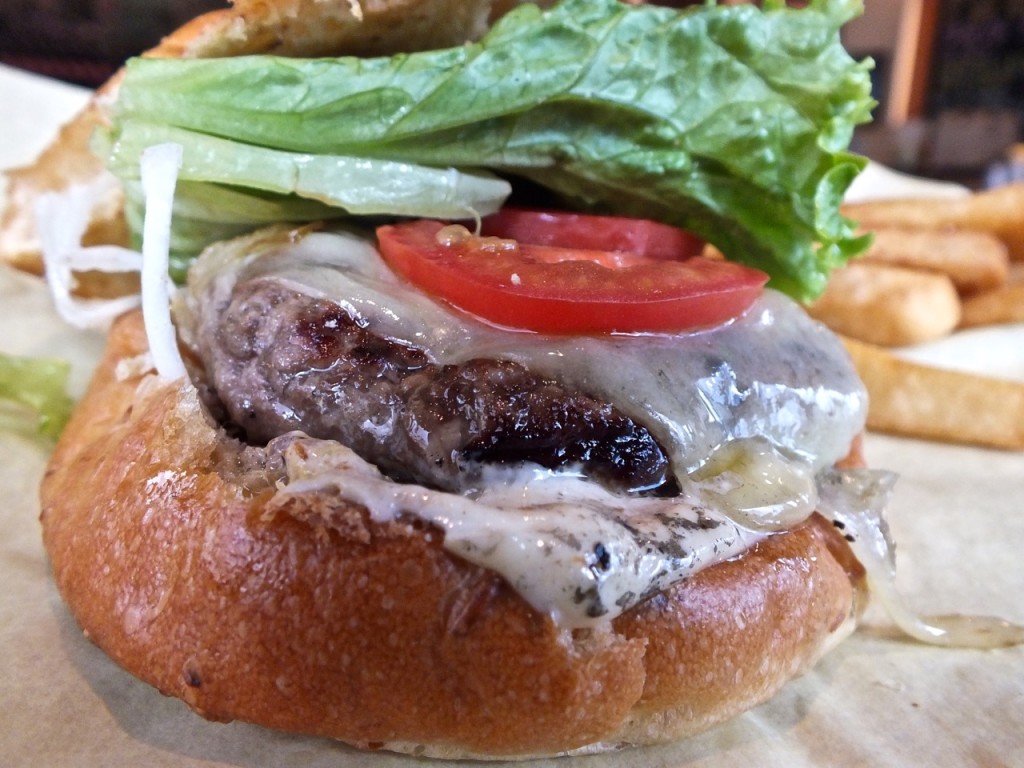 Other burgers include the Roaring Forties, with Blue Cheese and portobello mushrooms; a Baja Burger with guacamole and pepper jack cheese; and a Mediterranean Burger with roasted peppers, basil, hummus and feta cheese. Extras include the ‘Weekender Brunch’, topping any of the burgers with thick-sliced bacon and an egg, or simply topping the burgers with the bacon. Even though the menu is definitely burger-centric, other types of diners are accommodated too. For vegetarians, Meagan’s Greek Wrap features lettuce, jalapeño and cilantro hummus, feta cheese and tomato on “Mrs. Nick’s Special Wrap’. The wrap can also be ordered with grilled chicken on it. For piscaterians, a grilled mahi mahi taco is a good choice.

Even the French fries at Mick’s Karma Bar and HachéLA are special with their French heritage showing through. The fries are thick cut and triple-fried in the style of true pommes frites. With the potatoes having an airy, light quality to them, they are a perfect accompaniment to the burgers. The pommes frites are definitely worthwhile getting and can come with a variety of dipping sauces also. Mick has certainly embraced the best of French cooking for both his burgers and frites. 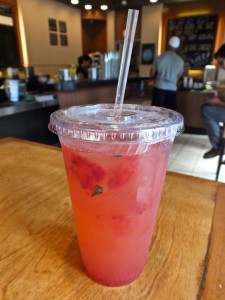 Drinks at most places are usually an afterthought, but at Mick’s Karma Bar there is a fanatical following for his Strawberry Basil Lemonade. This homemade drink is definitely as it is described, with small chunks of luscious fresh strawberries and several fresh basil leaves in it, adding a subtle taste to the delicious fresh lemonade. It looked like everyone who ordered a burger after waiting in line walked away with the Strawberry Basil Lemonade, a testament to its popularity.

A Purple Palmer, made with lemonade, hibiscus tea and a touch of cranberry/pomegranate is an interesting take on the popular Arnold Palmer, while green or tropical iced teas are available. Another nice take on iced tea is the Mojito Iced Tea, with the zing provided by fresh lime juice, crushed fresh mint leaves and a touch of brown sugar which is then topped with blood orange sencha green tea. In sodas, an interesting choice is their Coca Cola, not the standard fountain drink but the Mexican Coke in a glass bottle, with its classic flavor coming from real sugar instead of the common high-fructose corn syrup. HachéLA also features draft beer and wine, along with nitrogen-frozen homemade custards. 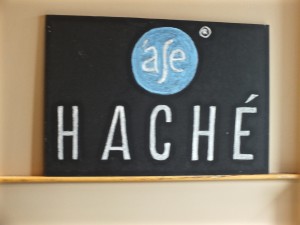 Mick’s Karma Bar is centrally located in an office plaza less than five minutes from John Wayne Airport, right where Irvine, Costa Mesa and Santa Ana all meet. Being close to the I-405/CA55 intersection, it is easy to get to from any part of Orange County. HachéLA’s location amid the art galleries, coffee houses, clubs, music and cooking stores, bars and boutiques means that it is not only easily accessible from Hollywood and Downtown LA but also a good destination for taking an afternoon or evening stroll in one of LA’s most bike and pedestrian-friendly areas.

With both Mick’s Karma Bar and the new HachéLA, Michael Schepers has succeeded in creating a burger that shows just how good this most famous of sandwiches can be. By emphasizing the quality of the steak haché itself, he has brought to the table a gourmet burger prepared with care and has even been able to do it at a reasonable price. Once you’ve checked out Mick’s burgers you’ll really be able to taste what a great burger should be like.

Ed is a native of Los Angeles who loves food and food cultures. Whether he's looking for the best ceviche in Colombia, the best poke in Hawaii, the best tequila in Jalisco or the best Taiwanese Beef Roll in Los Angeles, it's all good food! He also loves a good drink. He's had Mai Tais in Hawaii, Bourbon in Kentucky, Tequila in Mexico and Rum in Jamaica. His wine escapades have taken him to Napa, Sonoma, the Willamette Valley and the Santa Ynez Valley. And he's had beer all over the world! Music is another of Ed's passion, writing and interviewing many classic rock, rock and blues musicians. Getting the great stories of road experiences from them is a particular delight. Traveling also fits in with Ed's writing, exploring all over to find the most interesting places to visit, even in out of the way areas.
View all posts by Ed Simon →
This entry was posted in Food, Miscellanious and tagged burger, Ed Simon, HachéLA, Irevine, Michael Schepers, Mick's Karma Bar, pommes frites, Silver Lake, steak haché. Bookmark the permalink.

One Response to Mick’s Karma Bar in Irvine and HachéLA in Silver Lake Present an Awesome Burger, French Style