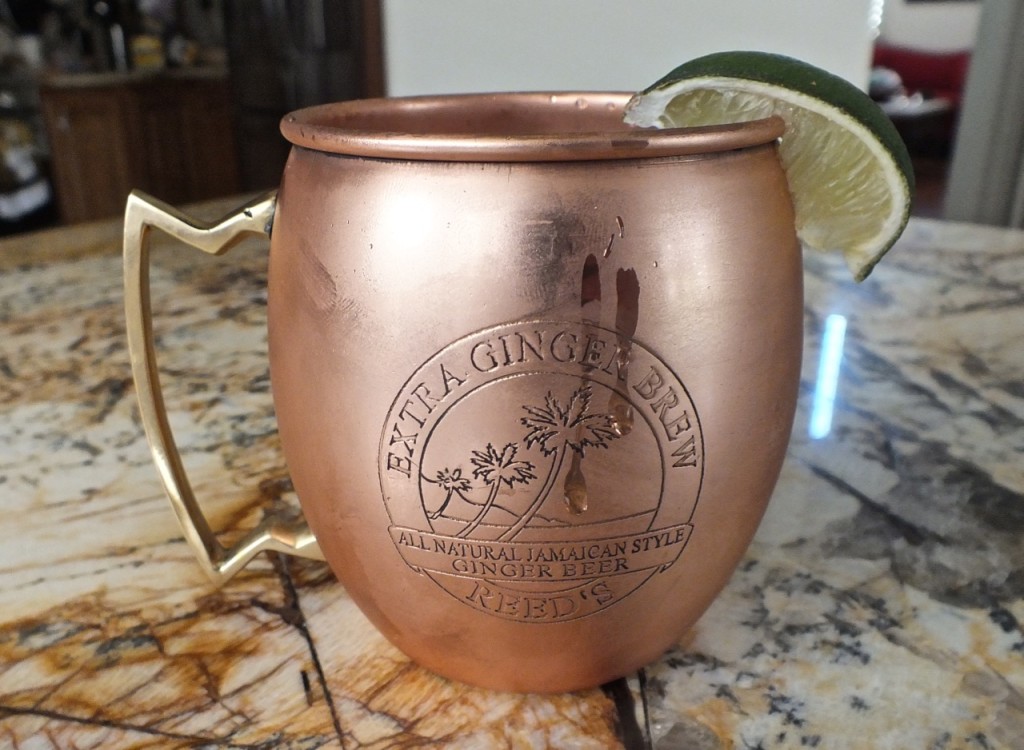 In part one of this report, Chris Reed from Reed’s Inc. spoke about ginger beer, its history, Reed’s creation of their ginger products, why ginger is special and what the health benefits are, plus why ginger beer works so well in mixed cocktails. In part two, Reed’s Ginger Brew and several other ginger beers will be taste tested, both as a non-alcoholic drink and also in the famous Moscow Mule. The Moscow Mules were evaluated by a group of six, some who were big fans of the Moscow Mules and others who were trying a Mule for the first time. It was a tough job for the test group, but they survived the many adult libations they had to try.

The ginger beers used in this taste test were Reed’s Original Ginger Brew, Reed’s Extra Ginger Brew, Reed’s Stronger Ginger Beer and Reed’s Extra Ginger Brew Light 55 Calories. One ginger beer that Chris Reed had mentioned as being a good ginger beer, Fever-Tree from the United Kingdom, was used for comparison as well as Trader Joe’s house brand Brewed Ginger Beer. No regular ginger ales were evaluated since generally they use artificial flavors and don’t have the true ginger taste of a ginger beer. For the Moscow Mule evaluation, Ketel One Vodka was used. To create a Dark and Stormy for evaluation, Zaya 12 year-old aged rum from Trinidad and Tobago was used. Most importantly, a copper mug was used for the Moscow Mule; while it can be prepared in a regular glass, the copper mug not only keeps the drink chilled better but adds to the authenticity of the drink. 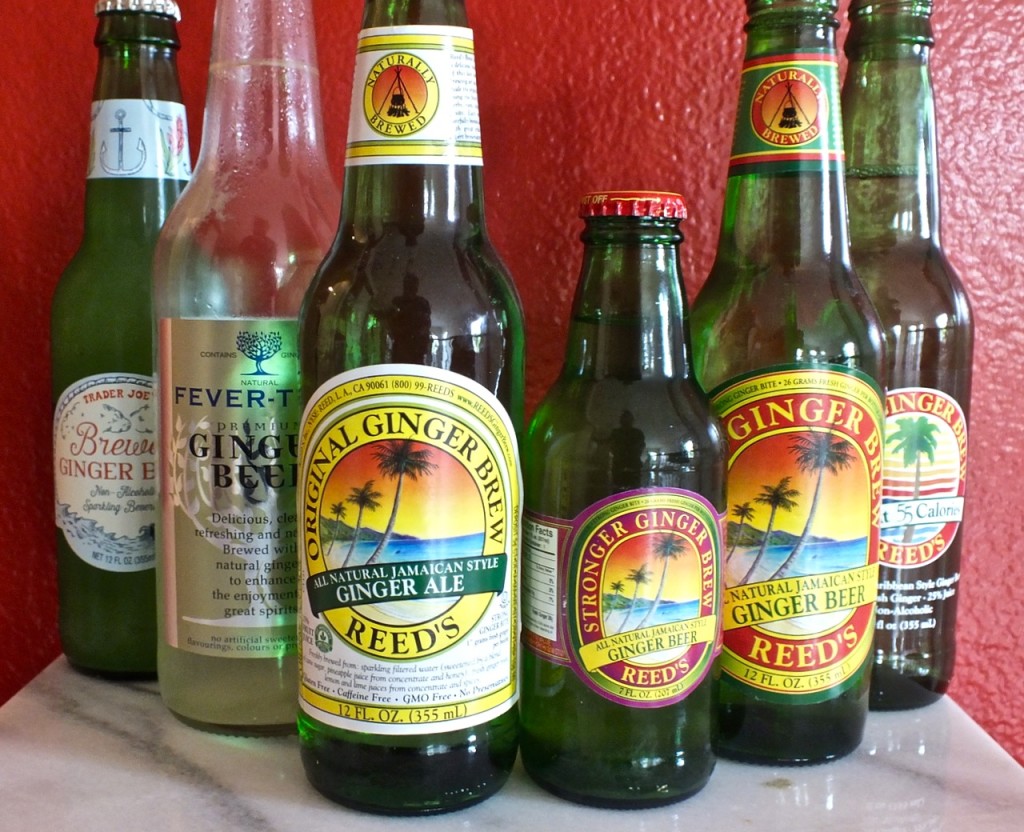 Reed’s Original Ginger Brew is refreshing, with just enough ginger in it to keep you aware of what you’re drinking. For someone just starting out with ginger beer or someone looking for a refreshing drink by itself, Reed’s Original Ginger Brew Ginger Ale is an excellent choice. The slight taste of fruit juices and spices in it adds an interesting twist to the flavor without masking the ginger taste. For a Moscow Mule, it is acceptable although the vodka can tend to hide some of the gingery taste.

Trader Joe’s Brewed Ginger Beer is decent overall, with slightly less of a gingery taste than the Original Reed’s. In some ways it is more of a fruit soda, with the fruit flavors standing out much more than in the Reed’s Original. It is a refreshing drink in and by itself, however it loses most of the gingery taste when mixed into a Moscow Mule.

Reed’s Extra Ginger Brew is the basic one that Reed’s refers to as a ginger beer rather than a ginger ale. This is where one starts to get the ‘bite’ from the ginger and where the fruit juices and spices start to take a backseat to the ginger. This is a good drink for a fan of ginger who wants a little of the ‘bite’ that a true ginger beer has. With several people evaluating the Moscow Mules, the consensus was that Extra was the perfect mixer in a Mule. The ‘bite’ and gingery taste cut through the vodka enough that it was apparent what it was. For those who had not tried a Moscow Mule before, however, the ginger was not too strong for them.

Reed’s has responded to those who want a less-caloric drink by bringing out a version of Extra made with stevia and Called Light 55 Calories. Overall, the taste was passable, but certainly not in the class of the Extra Ginger Brew. It did have somewhat of an off-flavor and certainly did not have the gingery impact of the regular Extra. As Chris Reed said, “I think we can improve on it, but I think the only way to really improve on it is to say, “OK, there’s some calories in it, now go out and hit some tennis balls!”

Fever-Tree is a brewed premium ginger beer from the United Kingdom and very popular for making Moscow Mules. It is on the expensive side but has a really nice ginger flavor, with not only ‘bite’ but a nice ‘heat’ aftertaste to it. As a standalone beverage, it may be too strong for most people, but in a Moscow Mule it makes an assertive drink, excellent for people who really want the taste of ginger in their Mules.

Reed’s also noticed that the gingery taste was really softened when mixed with a Moscow Mule, so by virtue of feedback from a lot of the top bartenders in the country, they created a new ginger beer especially for use in Moscow Mules. Reed’s Stronger Ginger Brew is made with 50% more ginger than the Extra Brew, making it a nice choice as a soda for those who are really fans of ginger. There is no doubt that this is a ginger drink! Interestingly enough, although it has a stronger ginger taste, there is less ‘bite’, however there is more of the ‘heat’ especially in the back of the throat. 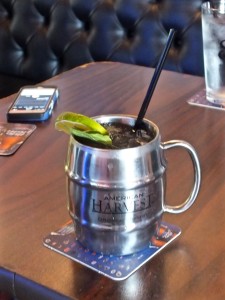 This drink is really targeted to the Moscow Mule crowd, though, even down to coming in a seven-ounce bottle which is a perfect size to make one Moscow Mule. Magically, some interesting things happen when it is mixed with vodka and lime, the other two components of a Moscow Mule. The ‘bite’ really comes out as well as the ‘heat/warmth’ of the ginger in a Moscow Mule. To the non-Mule drinkers it was not as popular as the Mule made with the Extra Ginger Brew, but to those that have been drinking Mules for several years, the reaction was that this was the perfect Moscow Mule. All the flavors seemed to really balance out, with only a slight hint of sweetness in the drink.

When the Stronger Ginger Brew was blended with a good Zaya Rum to make the other classic ginger beer drink, the Dark and Stormy, the Stronger also showed an affinity for the rum. Blended with a good, aged rum, the ginger taste was well-balanced and did not hide the excellent taste of the rum. Rather, it worked with the smooth rum to create a nicely balanced drink that was a pleasure to sip. Even when the rum was poured a little heavier than called for in the drink, the rum and Stronger Ginger Brew seemed to balance themselves out with neither one overpowering the other. 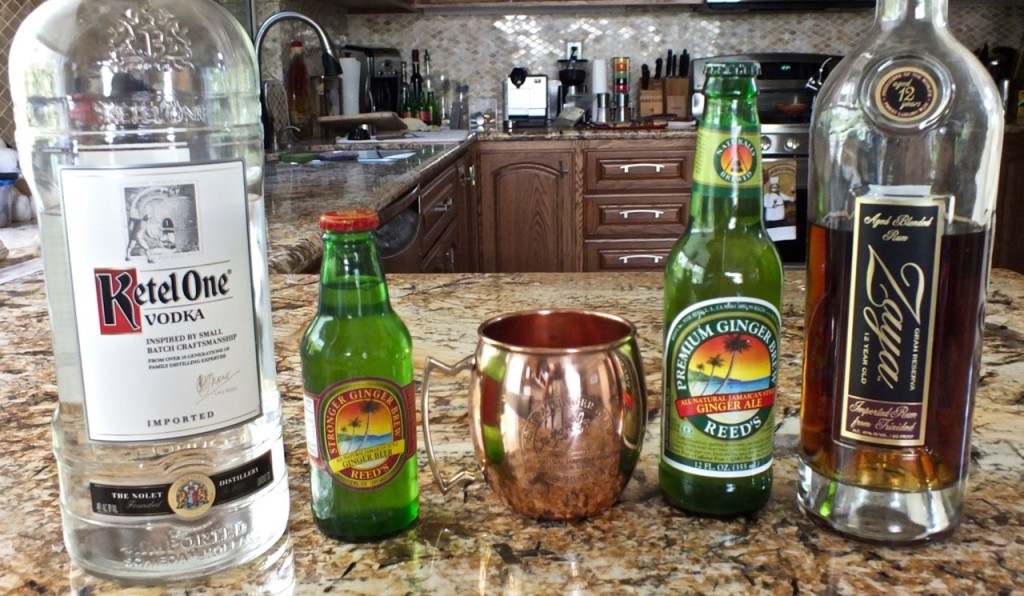 In conclusion, the type of ginger beer or ginger ale you drink separately and in a mixed drink is heavily influenced by how much of a fan of ginger you are. Reed’s does have a big advantage over most of the other ginger soda and beer manufacturers in that they have flavors from ‘mild to wild’, so it is easy to find one that you can enjoy. Also, a ginger beer novice can start off with the Original Brew and as tastes mature, explore the other brews from Reed’s, giving the novice a chance to try a stronger brew while still enjoying the basic flavor profile that Reed’s has created. Overall, Reed’s has created a line of ginger brews that is hard to beat and, by creating a special Stronger Ginger Brew especially for Moscow Mules, helps anyone, whether professional mixologist or home bartender, to create the perfect drink.

Add 4 or 5 ice cubes to glass or copper mug and squeeze lime over ice, dropping lime on top of ice. Add vodka and fill with ginger beer. Garnish with a stirring rod.

Place 4 or 5 ice cubes in tall glass, add rum and ginger beer. Squeeze lime into drink and then garnish glass with lime.
For information on Reed’s beverages: http://reedsinc.com/

Ed is a native of Los Angeles who loves food and food cultures. Whether he's looking for the best ceviche in Colombia, the best poke in Hawaii, the best tequila in Jalisco or the best Taiwanese Beef Roll in Los Angeles, it's all good food! He also loves a good drink. He's had Mai Tais in Hawaii, Bourbon in Kentucky, Tequila in Mexico and Rum in Jamaica. His wine escapades have taken him to Napa, Sonoma, the Willamette Valley and the Santa Ynez Valley. And he's had beer all over the world! Music is another of Ed's passion, writing and interviewing many classic rock, rock and blues musicians. Getting the great stories of road experiences from them is a particular delight. Traveling also fits in with Ed's writing, exploring all over to find the most interesting places to visit, even in out of the way areas.
View all posts by Ed Simon →
This entry was posted in Cocktails, Beer, Wine & Weed, Interviews, Miscellanious and tagged Dark and Stormy, Ed Simon, Fever-Tree, ginger ale, ginger beer, ginger brew, Ketel One, Moscow Mule, Reed's, rum, Trader Joe's, vodka, Zaya. Bookmark the permalink.