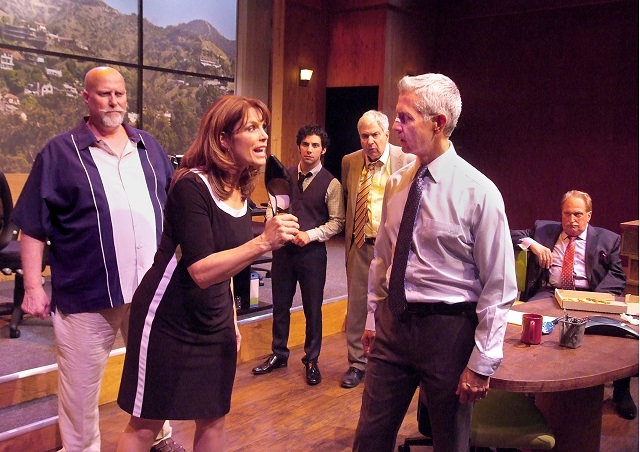 What if the financial world as we knew it suddenly went “radioactive” and crashed more dramatically than in 2008? You’d see a lot more glassy-eyed, white knuckled white guys lope to safe deposit boxes than we’ve ever not seen the globe over. Or perhaps they would trot on out to the Boulevard below the office in which this particular play takes place and not a John in a Camaro and sunglasses would be any the wiser as to their true identity…

The fictional financial crash of 2015 (ad infinitum) is what 63 Trillion by John Bunzel embarks to explore. Set in an office high atop what looks like Sunset Boulevard–in deference to the set’s relief backdrop displaying half of Merv Griffin’s house and all houses beneath it on the most elevated peak of the Hollywood Hills–financial advisors this small portion of the city over pace, stammer, sweat, yell, punch, shove and threaten each other along with their downtown office attorney who might just even vomit on top of the lot of it! Invariably someone will reference a disgruntled, recently fired employee taking a “dump on my desk”, but thankfully, this is never reenacted dramatically (or comedically for that matter) on set in real time.

The opening conversation betwixt a pasty, white-haired Tom and a would-be swarthy, dark-haired yet synchronistically sun deprived Frank poetically revolves around Frank’s dog aka his “little fucker in a fur coat”. Said canine has randomly just attacked Frank’s ninety year old mother (who, when inquired by Tom made ‘no sudden moves’—she’s ninety years old for Christ’s sake!) sporting a “big, pink, glistening hard on”.  Short of any references to ‘sticking something where the sun don’t shine’ I can only sense an impending metaphor in progress.

Glib platitudes are slung about the office like so much ancillary loose change sounding a lot like something you’d find–not so much in a self help book–but more in any given “help yourself (to anything in the world)” book. 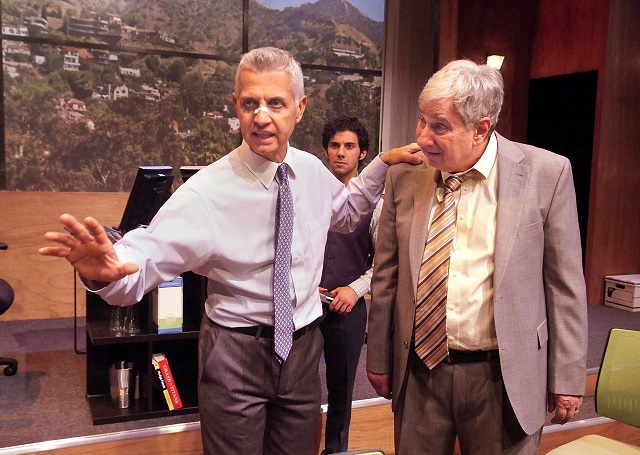 “It’s not about what you know. It’s about how you feel.” ~ Kenny

“It doesn’t matter what happened, it only matters what they say happened.” (huh?)

“We’re all assholes acting like we’re not assholes.” (In actuality, probably the most enlightened quote of the play.)

Oh and another one of my favorites, “I’m not interested in helping people. I’m a financial advisor.”

(“I should have checked myself!”~Guy who wrecked himself)

The success of the firm at this point all seems to hinge on the richest of rich fellas by the last name of “Calypso” and I can’t help but muse upon the word “collapse” and/or “apocalypse” every time I hear its utterance—well that and some really fancy tropical dance moves.

An additional character named Peter Black is also involved and it is he with whom they get in the most trouble with the loss of a 10 million dollar bank transfer at the apex of the beginning of the end. Conversely and in relation to “Calypso”–regarding the last name “Black”–I do very much enjoy the irony of it as, all else concerning the financial company, and the matter of Peter’s lost funds puts everything decidedly in the Red!–And perhaps Peter’s first name is Peter because well… he’s kind of a dick. (My sincere apologies to anyone named Peter on behalf of the douchebag who linked the name to the slang term for men’s nether corporeal Johnsonage.  But hey, what’re ya gonna do?  It’s all too much there for the taking!) 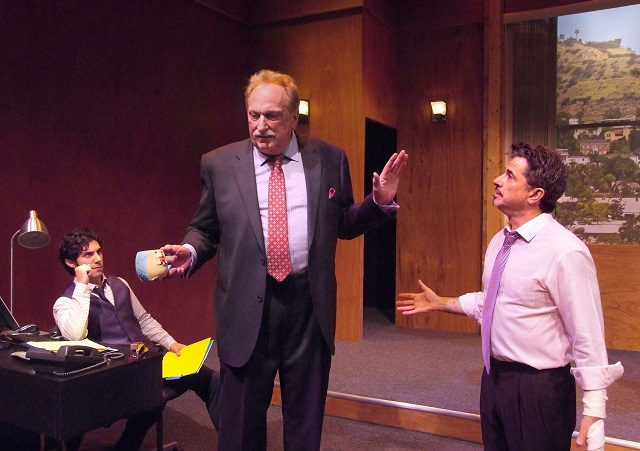 The plot itself is pretty straight forward. The story commences on a sort of hundred dollar bill homeostasis and wraps up on a one dollar bill day of reckoning swiftly and exponentially thereafter.

In short: These are men who now lack both principles and principal. D’oh!—And It’s really quite just a little fun to watch!

Along the way however, and to make things more textural, clients’ money is lost (see above), a lawyer from the dreaded downtown office arrives to begin the process of auditing and firing, and a coup d’etat yielding an almost deserved (hinging on the word “almost”) reversal of fortune masterfully materializes.

The writing itself is quite exquisite and the dialogue flies. Acting is polished, well paced and damned near perfect (if not just damned–omitting the ‘near’). Robert Cicchini as Frank is coarsely slick and smart-guyish, Ken Lerner as Tom is bug-eyed and a little bombastic, Jack Stehlin as Kenny is deliciously devious and doltish all in one.  Jeffrey Jones in the role of Dick (and a congruous answer to the slang term of poor Peter) is delectably deceptive and douche-worthy! Jordan Lund as Peter Black is superbly surly, and Megan Gallagher as Nancy from ‘corporate’ is a balancing, beautiful, breath of fresh air as she puts all these men in their place  “…all the damage you men have done throughout the centuries…”  Noah James, the youngest member of the cast cops the perfect balance of sympathy and suspicion in the role of Jonah as Tom informs him, “You are just a worker bee in a colony.  You are pond scum.”

“I know who I am,” he will consent and may even surprisingly know just what to do about it!

A mightily polished performance over all.

The set by Jeffrey R. McLaughlin is magnificent but my perception of how the picture window was used generated mixed feelings. They draw the shades on the beautiful relief of the Hollywood Hills for far too much of the play (though I can understand exactly why if it is supposed to perpetuate a ghastly, symbolic pall of catastrophe the office/world over). Yet by the time Kenny returns from crunching numbers or whatever he’s been doing offstage and exclaims “It’s Defcon 4 out there,” I can only imagine that the blinds are still closed because the Hollywood Hills have gone up in flames wherever “out there” is.  So in that sense it is somewhat delicious and dramatically apropos, to speak nothing of the fact that the outdoor backdrop reflects both daylight and darkness as the two times the blinds are opened are during the day and, towards the end, around 5 o’clock in the morning. 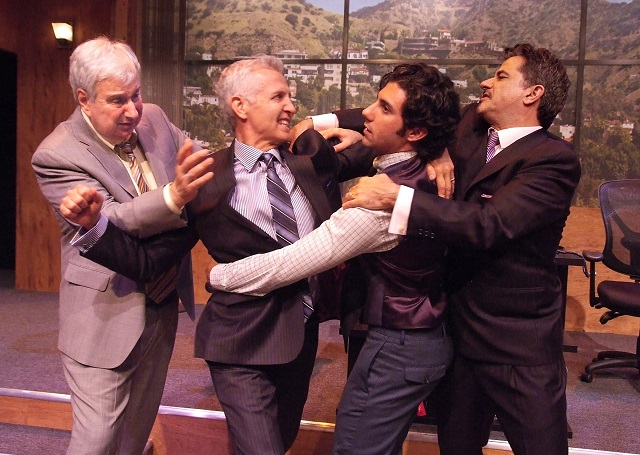 Lastly, I wasn’t too keen on the ending, not because of how it ended but because of way it built itself up so specifically.

I heard people around me gasp as the last couple of lines were uttered and, unless I missed something (which I very well could have ironically enough in light of my perfunctory  reviewer’s chicken etchings during the course of the dialogue) I couldn’t really figure out why, as said coup d’etat had already been addressed quite thoroughly two scenes before. And unfortunately, yet ironically, because of said key and very specific (albeit very well written) scene between two plotting characters prior to the reveal, I wasn’t at all surprised by the turning of tables and I sensed that it was supposed to be an ending born of shock and aha! I wanted it to creep up on me subtly foreshadowing like a stealth Ninja—not so much like Kato taking a slow and steady Jackie Gleason sprint upon Inspector Clouseau’s arrival back from his travels!

Another aspect of the final reveal was that it felt too easy and taken at face value by a fellow faker. I wanted the jilted character to register denial as the first sign of grief and then would have preferred that the character triumphant in the final power struggle tell the fallen character something he could not have known unless he was telling the truth.

Other than that, the whole thing was incredibly slick!

63 Trillion runs until June 7th at the Odyssey Theatre in West L.A.

Jennifer K. Hugus was born at a very young age. At an even earlier age, she just knew she would one day write for the LA Beat! Having grown up in Massachusetts, France, and Denmark, she is a noted fan of Asian Cuisine. She studied ballet at the Royal Danish Ballet Theatre and acting at U.S.C. in their prestigious BFA drama program. She also makes her own jewelry out of paints and canvas when she isn’t working on writing absurdist plays and comparatively mainstream screenplays. Jennifer would like to be a KID when she grows up!
View all posts by Jennifer K. Hugus →
This entry was posted in Theater and tagged 63 Trillion, John Bunzel, The New American Theatre, The Odyssey Theatre. Bookmark the permalink.