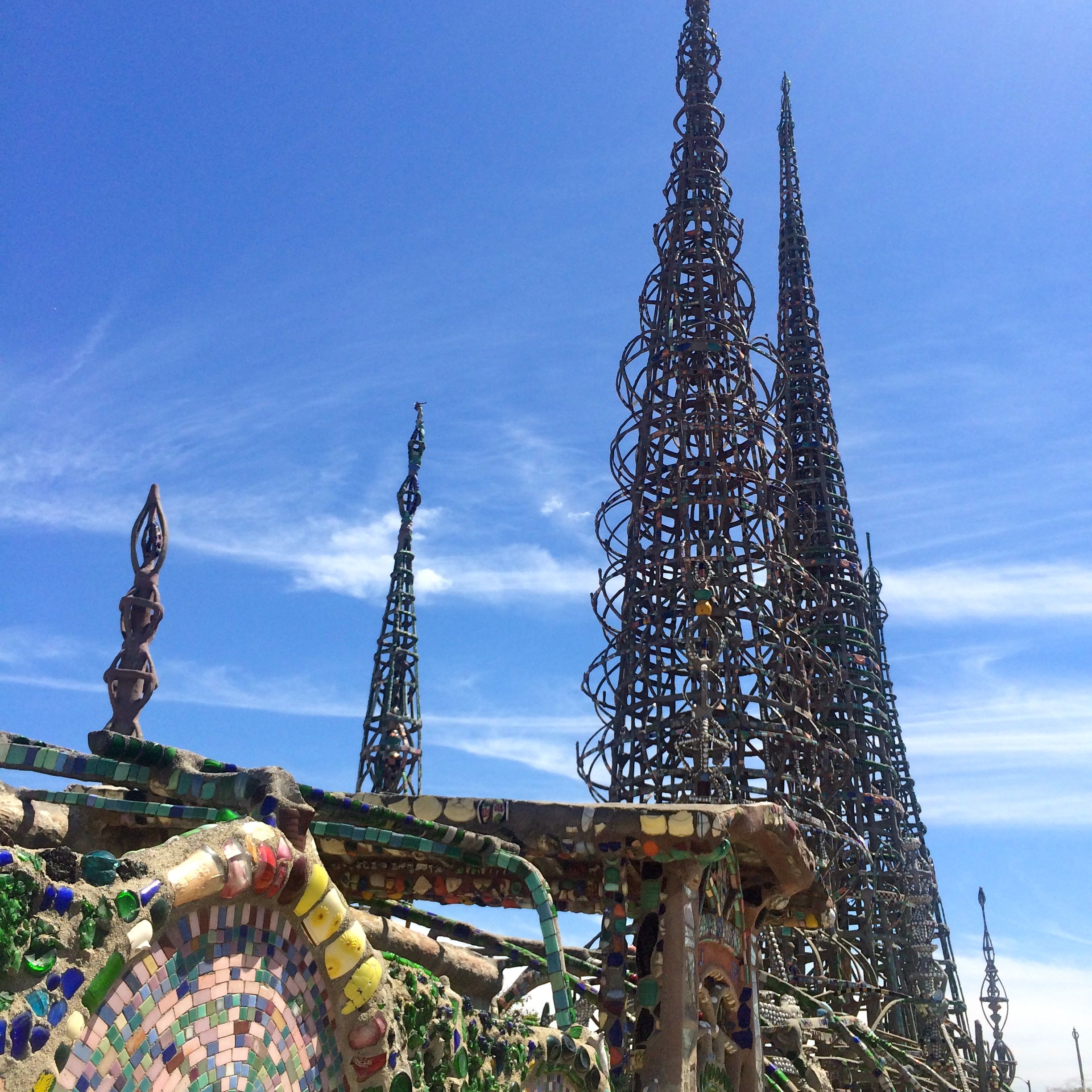 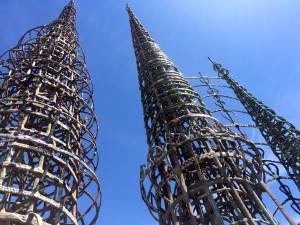 Emerging, like shimmering spires breaking up an otherwise desolate landscape, Watts Towers rise majestically and triumphantly over a neighborhood whose reputation has long been rooted in turmoil. They are the lifelong creation of an Italian immigrant, who breathed into them his heart and soul, sweat and ingenuity, hopes, dreams and every spare minute he had over 34 years. They scream love, they shout commitment, they prove beyond a doubt that a mere mortal man, a common laborer, a loner, can give birth to lasting beauty; a human act of immortality. 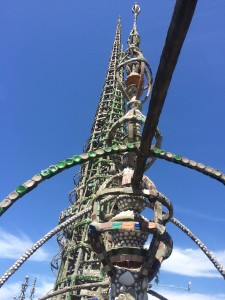 Simon Rodia started constructing his masterpiece in 1921. With three failed marriages under his belt, a job finishing cement and a history of solitary drinking, Simon purchased a triangular-shaped piece of land on a scrubby Watts block full of mainly Mexican immigrants. At age 42 he became determined to leave his mark on a world that mostly looked askance in his direction. With found objects, broken tile, discarded bottles and sea shells which he collected on 20-mile walks to Long Beach, he worked hard and relentlessly. He became an odd neighborhood fixture, building non-stop when he wasn’t working his day job. Children brought him scrap pieces in exchange for candy money and curious adults engaged him in conversation. 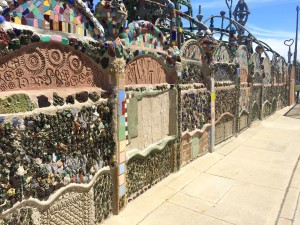 The exterior wall of the towers, inlaid with melted glass fragments, tile and tool imprints (photo by Nikki Kreuzer)

Simon worked his loneliness away. It is no coincidence that after his death his image appears as part of the collage of people standing behind the Beatles on the Sgt. Pepper’s Lonely Hearts Club Band album cover. He could very well have been one of the “Lonely People” in the song Eleanor Rigby, except for the fact that his towers were his salvation, his connection, his raison d’etre. They stood tall and strong where much else in life had crumbled to dust. He used hand tools and bent the steel and rebar himself, erecting a total of seventeen massive sculptures, with the highest of the towers piercing the clear blue California sky at nearly 100-feet. 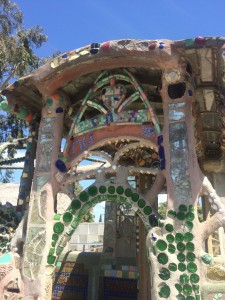 Along with the four main towers, he created walls that he covered with mosaics and a central gazebo that often functioned as a neighborhood wedding chapel. Love was a central theme of Rodia’s design, and heart shapes are worked and re-worked into his patterns. He also used nautical themes to show his respect for the early explorers. Many today believe that the exterior triangular walls form the shape of a boat, with the towers acting as masts. They point out a steering wheel and port hole shapes, tile patterns resembling a wave line and conclude that the prow of this “boat” points in the direction of Rodia’s birthplace in Italy. In the middle of this ship was Simon’s tiny home, which was destroyed in a fire some years after he had left the property. Rodia continued to build for over three decades. 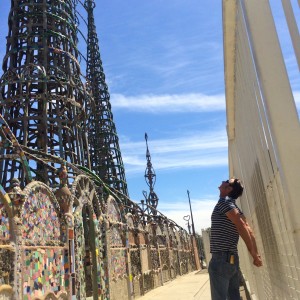 And the story goes that one day in 1954 Simon Rodia dusted off his hands and decided that he was done. With no grand finale and little apparent sentimentality, at age 75 he deeded his property to a neighbor and picked up and moved near his sister in Northern California. He lived in a boarding house there for the last ten years of his life and never visited his towers again. It is said, however, that he would tell the story of his towers to anyone who would listen. They were his source of pride. Rodia died in 1965, two years after his towers were designated the 15th Historic Cultural Monument by the City of L.A. They have since become a California State Historic Park and been given National Historic Landmark Status. 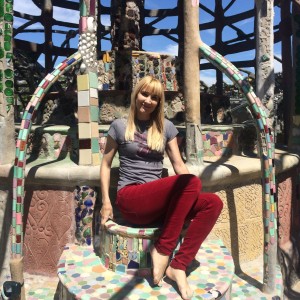 The author sits on the edge of the gazebo

The Towers today are part of the Watts Tower Art Center, a gallery focusing on education and social change. Visitors shouldn’t be intimidated by the neighborhood’s history. It is safe and working class with a parking lot on site. Guided tours are given Thursdays through Sundays in the early afternoon.

Nikki Kreuzer has been a Los Angeles resident for over 30 years. When not working her day job in the film & TV industry, she spends her time over many obsessions, mainly music, art and exploring & photographing the oddities of the city she adores. So far she has written 110 Offbeat L.A. articles, published at the Los Angeles Beat. As a journalist she contributes regularly to LA Weekly, Blurred Culture and The Los Angeles Beat and has also been published by Oddee.com, Twist Magazine, Strobe and Not For Hire. Nikki is also a mosaic artist, radio DJ and published photographer. Her photography has been featured in exhibit at the Museum of Neon Art, in print at the LA Weekly and is part of an upcoming show at the Neutra Museum in Los Angeles. She has recorded with the band Nikki & Candy as bassist, vocalist and songwriter, directing and appearing in the 'Sunshine Sunshine Santa Claus' music video for the band. She co-hosts the monthly radio show Bubblegum & Other Delights on Dublab.com. Her acting credits include a recent role in the ABC-TV show 'For The People', 'Incident at Guilt Ridge', 'Two and a Half Men', the film 'Minority Report' and 'Offbeat L.A.', a web series, written and hosted by Nikki Kreuzer. Her writing, radio and video portfolio can be found at OffbeatLA.com, her photography work @Lunabeat on Instagram and her music history posts @NikkiKreuzer on Twitter. Find Nikki & Candy music on iTunes, Amazon or at NikkiandCandy.com.
View all posts by Nikki Kreuzer →
This entry was posted in Art, Attractions, Miscellanious, Offbeat LA and tagged Nicole Kreuzer, Nikki Kreuzer, Offbeat LA, Watts Towers. Bookmark the permalink.

One Response to Offbeat L.A.: Watts Towers… A Common Man’s Dreams Pieced Together in Mosaic and Steel