Goodbye, Mercury Rx and all that came, upside down, with it. For reconnections and research, it was a doozy (wacky phone calls, texts, emails, anyone? iMessage bug?) as it takes its time leaving. On the bright side – and there always is –  if you can get out of Los Angeles and find a spot with relatively little light pollution, we’ve got one more night of Venus tonight at her brightest as she grabs lucky Jupiter to go hang out with the “Beehive Star Cluster.” That’s a party I’d like to be at. Four days after Tuesday’s New Moon at 7:07 AM , the visible crescent meets up around dusk with our happy twosome Venus and Jupiter. Head up to the Observatory and take a peek while toasting the beginning of summer, one week from today.

So what do we have going on with this new moon? A great big “thank you,” for one. End of Mercury Rx, beginning of summer – all good stuff. It ain’t what you do, it’s the way that you do it. Get out the dustbuster and move that stagnant Mercury dust trails out the door from whence they came and wish on the moon.  Right or wrong? Up or down? Left or right? The choice is all yours. You keep wanna doing that same old thing? Go for it, but you can’t kid yourself anymore. You know how that one is gonna play out. If you don’t jump, no one’s gonna push you. Go for it, and you may just be surprised that it’s only when you leap that the net appears.

The Hierophant appeared repeatedly over the past few days. Hmm – interesting, because in some decks he’s interpreted as Jupiter. We’ve got tradition, learning, group identification, and perhaps a new teacher.

Higher learning in a traditional way, such as being a student, and the illumination that comes with, of all things, tradition. Rebel rebel? Not this month. Tried and true? Perhaps, but it’s someone else that’s going to show you how much freedom there can be in what you used to view as restricted. 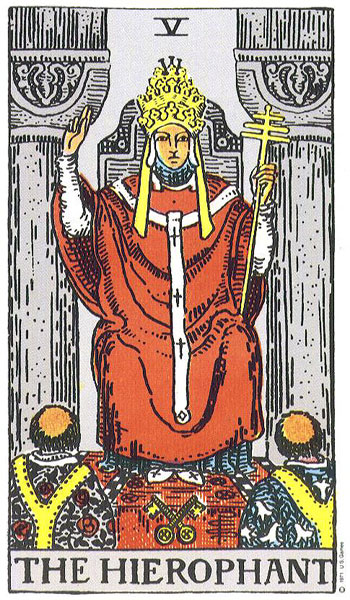 Donna Lethal is the author of "Milk of Amnesia" and writes for her own blog (Lethal Dose), Hair Hall of Fame, Dowager Quarterly, Find A Death, & the Valhalla Cemetery chapter in "Weird Hollywood." A native of Lowell, Mass., she's lived in Boston, NY and London before settling here. When not writing, she's hiking, soaking in a Korean salt room or in the high desert with her pit bull.
View all posts by Donna Lethal →
This entry was posted in Miscellanious. Bookmark the permalink.