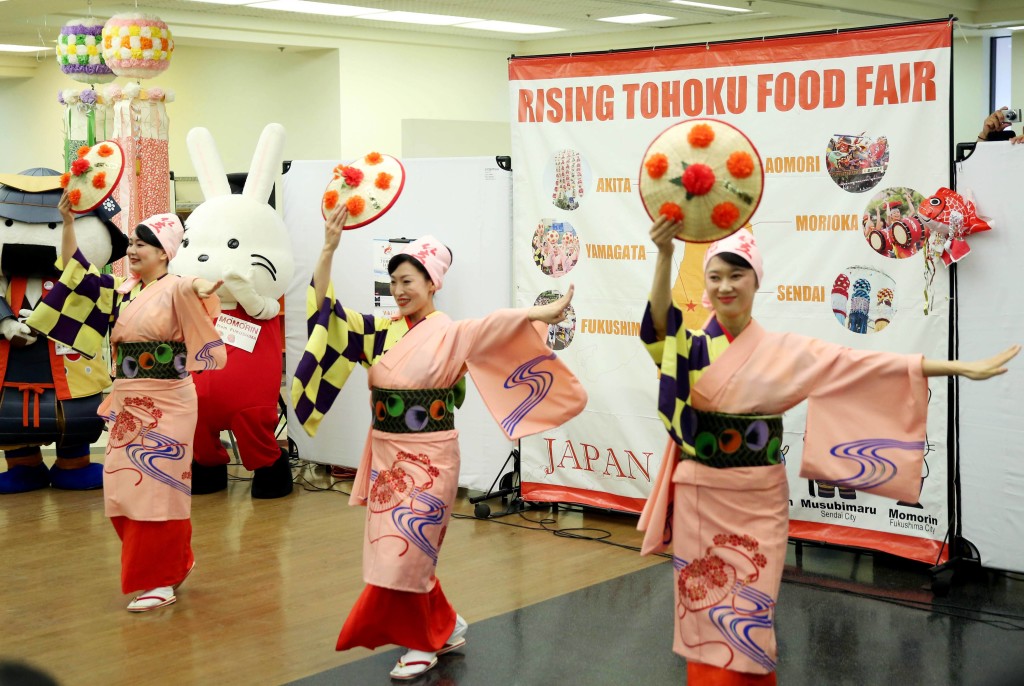 It’s a multimedia happening that the whole family will enjoy, offering an appreciation of the exquisitely subtlety and complexity of Japanese culture far beyond the common American perceptions of anime, manga, California rolls,tiny electronics and Harajuku Lolicon street fashion.

The Tohoku region of Japan was devastated by the magnitude-9 Great East Japan Earthquake on March 11, 2011, and the effects are still being felt there. But this four-day event is no downer, instead raising awareness of the resiliency, progress, and the enduring cultural treasures of the region.

There’s something for the entire family, including tastings of regional foods, traditional dance and theatre, and of course hanging out with city-specific mascots in costume.

Through Sunday, check out the Samurai performance called the Da-te Busho-tai, along with artwork showcasing local festivals in six different cities in the Tohoku area.

The highlight of the Rising Tohoku Food Fair is undoubtedly the irresistible music and dance of each city. The Suzume dance from Sendai City features drummers similar to those in a Western marching band, and elegant dancers dressed in sumptuous robes. Marioko City Sansa dance dresses the performers in bright colors, artfully playing traditional hand-instruments while moving to choreography. The most energetic performance is the Yamagata City Hanagasa dance, with classical handheld fans, lots of athletic jumps and other high-energy moves. The performers invite the audience to bust a few moves and chant along.

Kids love this: cool crafts workshops, including coloring, wish-writing on tanzaku (Japanese paper) and hanging special lanterns on poles. And of course there are those photo-opps with city mascots, clad in iconic, Comicon-worthy rig like their counterparts at Disneyland.

The girl mascot Hanagata Beni-Chan wears a cherry-patterned kimono and hanagata hat, with hair styled to suggest a safflower. And not even those who keep kosher could resist a hug from Nebutan, the cuddly pig dressed in the haneto costume worn at Aomori prefecture’s world-renowned Nebuta Festival.

“We are so pleased that the Rising Tohoku Food Fair hosted by Mitsuwa Marketplace helps draw the world’s attention to the seriousness of the Japanese earthquake and brings awareness to the ongoing recovery of the culturally rich Tohoku region which has so much to offer in terms of refined and flavorful cuisine, beautiful crafts, and goodwill,” says Hiroshi Kamata, Chairman of the Federation of Six Tohoku Prefecture Chambers of Commerce and Industry.

In a word: yummy. The cultural content here is made so accessible, appetizing and easily digested, you’ll crave more tomorrow. The event reminds us that this floating world is just on the other side of our own lapping Pacific surf, so you may be moved to update your passport and book that mind-expanding visit to the Japanese experience beyond Tokyo.

Brooklyn-born Victoria Thomas loves writing about flora and fauna, although she chooses to do so in an urban setting. If she had it all to do over again, she might have become a forensic entomologist. She lives in Los Angeles.
View all posts by Victoria Thomas →
This entry was posted in Events, Food, Upcoming Events and tagged japan, Japanese culture, kimono, Samurai, Tohoku. Bookmark the permalink.