Noho Arts Center’s New Musical Reunion: Reminds You Just How Good it is to be the Nerd Sometimes! 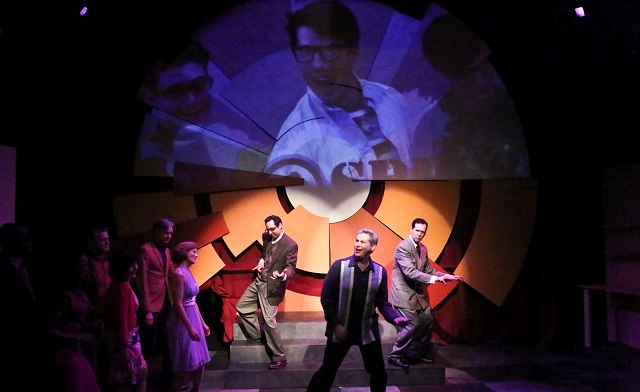 Aaaah high school reunions: The only party to which you will ever be invited amidst a group of people wherein you may not have felt so welcome yourself at one time or another; the only gathering that allows for a look into the future (of sorts) by way of the past in a manner in keeping with both the best and worst of Doctor Who episodes.  Granted, if you were in fact, into Doctor Who in your teens, “Who?” would most likely be your nickname at the Reunion until you proved said nobodys–who can neither recollect you or the multicolored scarf you may very well have hidden your neck acne and double chins under–wrong!  And often times it is not so impossible to do as, as the old adage goes, the skinny kid is now the fat kid, the fat kid the fatter kid and the fattest kid, the PHAT kid!—Phew!

All this and a bag of chips (both greasy and gluten free) are explored in the latest Marc Ellis, Michael Lange, and David M. Matthews musical Reunion!—and oh yeah, it’s a comedy!  Set at “Frogs Neck High School. Now…and Then” (with no apostrophe to denote that said high school has been named in honor of the upper dorsal spine of any sort of noted amphibian—as originally assumed—but more in celebration of a neck of land wherein frogs abound) it is certainly very weird nomenclature nonetheless for an institution of medium learning.  But no matter.  There are plenty of chirping critters in our imagined exterior scenes for it to make a little sense the more the tale takes shape…

Featuring the usual suspects, but minus any ex-fat kids or Doctor Who freaks now that I think of it, certain dramas and quests for closure play out to this day. Patty, class valedictorian and perpetual people pleaser modeled her life after her husband and children’s needs.  She is now a high school English teacher with, according to her, an ever expanding ass which is what distinguishes her now, instead of her perfect grades back then when she was when head of the class. (See how that rhymes?  Yeah?  Well she may have just been singing this lament which is exactly how we know!—Though if she hadn’t mentioned her ass I wouldn’t have noticed it either way.  It’s really quite normal-sized.)  Margot hates English in her preference to communicate in, shall we say…other modes.  A regular Blanche Dubois of baby faced babedom, except with a fair amount of plastic surgery to which she freely admits (unlike Blanche Dubois whether she had it or ever admitted to it—hmmm) none of the ‘girls’ really like her, the boys—not so much—by default liking her toooo much!

Wayne is a devout Christian after having had a near death experience. Gordon is coordinator of the entire event, and someone he didn’t know was gay until the rest of the class didn’t know it but not after outing himself as a noted fashion designer whose label may just be sported by half the people there.  Tony is Gordon’s special friend who may just contribute to a closing surprise of sorts where Gordon is concerned.  (Yaaayyyy!!!  Who doesn’t love a good surprise!!!?) Jack is just kind of a douchebag but a d-bag who has kicked a lot of balls all the while spreading rumors about everyone he’s balled along the way—even to this day.  Sharon is the patient (read naïve/insane) woman who married him.  But hey, he was prom king once and kind of reminds one of Bill Clinton, so it’s all uh…mediocre… 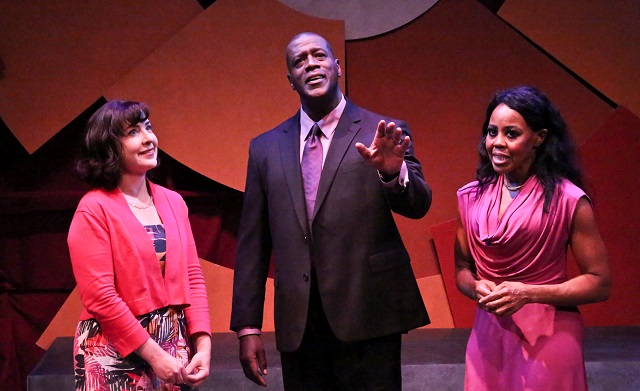 David is a skeevy, disenchanted, materialistic attorney but somehow pleasant and likeable evidenced primarily in his treatment of our protagonist Elliot, the loveable nerd to beat all nerds. Both are former members of their badass Buddy Hollyesque high school band The Specs (of or relating to nerdy eyewear) and it is David who is all too sensitive to Elliot’s never ending love for Amelia and it is he who supports him all the way through! Amelia is well…late, or perhaps never to arrive, except as a youthful ghostly vapor in Elliot’s mind and Janet a present day therapist, just wants to psychoanalyze everyone!

Incontinence, impotence, loose bowels, dropsy, the gout, all such things, or things much like them, are explored in one jaunty song or other being made all the more palatable because well…these references rhyme. They all rhyme!!!  And who doesn’t feel just a little more buoyant and giddy about their constipation when it rhymes–experienced anywhere or anytime!?!?

Staging is all encompassing and innovative. Not only is the proscenium well used, but silent film clips, some of which resemble outtakes from late 70s/early 80s classic films such as Rock n’ Roll High School or Fast Times at Ridgemont High hover above the musical numbers in question or between scene breaks like haunted to dorky ghosts of the past.  Some are downright humorous in their pantomime and I can only express a modicum of shock when, at the conclusion of the performance, I am informed that none of the clips are of our present day cast members in their youth, but of younger actor lookalikes; youthful doppelgangers more fittingly precise than in most Hollywood movies I have ever witnessed, and Hollywood has a budget to scour the land for such mirror images.  Shame on them for not living up to this production’s portrayal.

Of related note to the above in the flesh and blood realm is the near absent character of Amelia. Elliot’s imagination wanders several times throughout the festivities back to choral practice when he would stare at his pined after would be paramour.  Amelia’s younger self alights the stage and, when coupled with her present day self, almost alighting the stage and beyond, it is positively uncanny!!!

The music explores all styles, from that of the 80s, to Disco, to something that sounds like a Tango or other such exotic ballroom dance. The class graduation date is generic hovering assumedly somewhere between the late 70s/early 80s and quite possibly even the late 80s once Axl Rose is referenced and a part of me has a bit of a problem with this as I enjoy chronological consistency. Really, as a child of the 80s, I can sniff out any and all related inaccuracies from a mile away.  On the other hand, I understand somewhat why it is as ambiguous as it is. 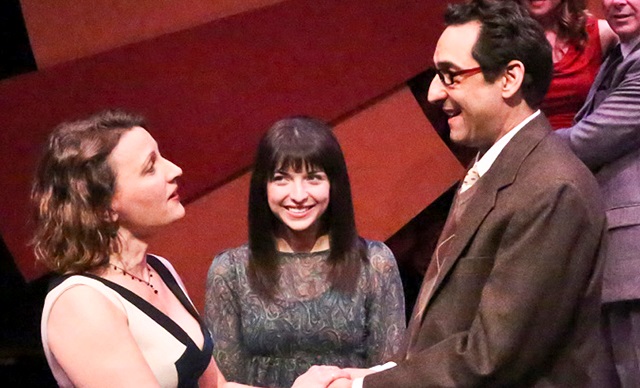 Overall, the musical is quite the fun, humorous and contemplative jaunt. My primary criticism however is that the build-up to the arrival of Amelia is so long in passing, the end result between her and Elliot is something I could have made happen between a select Barbie Doll and Ken at the age of six:  Absolutely no suspenseful narrative flow and conflicting texture whatsoever and it should really be fixed tout de suite!

The cast itself is a delight. David Babich as the silently tortured but loveable nerd Elliot is vulnerable and vigorous in all the right places.  Michael Gabiano as the somewhat surly lawyer David waxes skeevy and sensitive to the point of still being endearing (if you can imagine). Suzanne Mayes as Patty is sympathetic and humorous as the genius but seemingly jailed unactualized housewife. Christopher Youngsman as the reunion organizer/fashion designer, just has something magical going on revolving around himself and his character and Tony portrayed by the sprightly yet grounded Bradley Kuykendall would agree, while being agreeable for all the audience to see!  Jeffrey Rockwell as Jack the prom king/ex jock is well…just a creep, but a creep with congenial characteristics who sorta gets his comeuppance—if even subtly. Marc Cedric Smith as Wayne the near death experientialist, has a voice on him you wouldn’t want to meet in a dark spooky alley of singoff of Sundays (particularly if you were not that good to begin with) and is as earnest as he is affable.  Julie Marie Buis is bodacious as she is beautiful (yes even on the inside) as the plucky alleged-plastic surgery ridden Margot. Janna Cardia as prom king, ex-football star wife Sharon is both sorry yet sophisticated.  Sharon Catherine Brown as psychoanalyst Janet is just someone you truly wished existed in real life.  I’d totally tell all my problems and dysfunctions to her—if I had any of course…  And Kim Reed and Ali Axelrad make the perfect aloof to amiable duo as the initially elusive Amelia!

Direction and choreography by Kay Cole is very well coordinated. Music by Marc Ellis, Michael Lange, and David M. Matthews is wonderfully tempoed, diversely textured and really just kind of makes you feel giddy all the way over, and set and projection design by Brad Bentz and Yee Eun Nam are really quite nostalgically delicious…

For tickets and information, please call or visit:

Jennifer K. Hugus was born at a very young age. At an even earlier age, she just knew she would one day write for the LA Beat! Having grown up in Massachusetts, France, and Denmark, she is a noted fan of Asian Cuisine. She studied ballet at the Royal Danish Ballet Theatre and acting at U.S.C. in their prestigious BFA drama program. She also makes her own jewelry out of paints and canvas when she isn’t working on writing absurdist plays and comparatively mainstream screenplays. Jennifer would like to be a KID when she grows up!
View all posts by Jennifer K. Hugus →
This entry was posted in Theater and tagged musical theatre, Noho Theatre Center, Reunion. Bookmark the permalink.

8 Responses to Noho Arts Center’s New Musical Reunion: Reminds You Just How Good it is to be the Nerd Sometimes!