Offbeat L.A.: Get on Your Pony and Ride – Sunset Ranch in Griffith Park 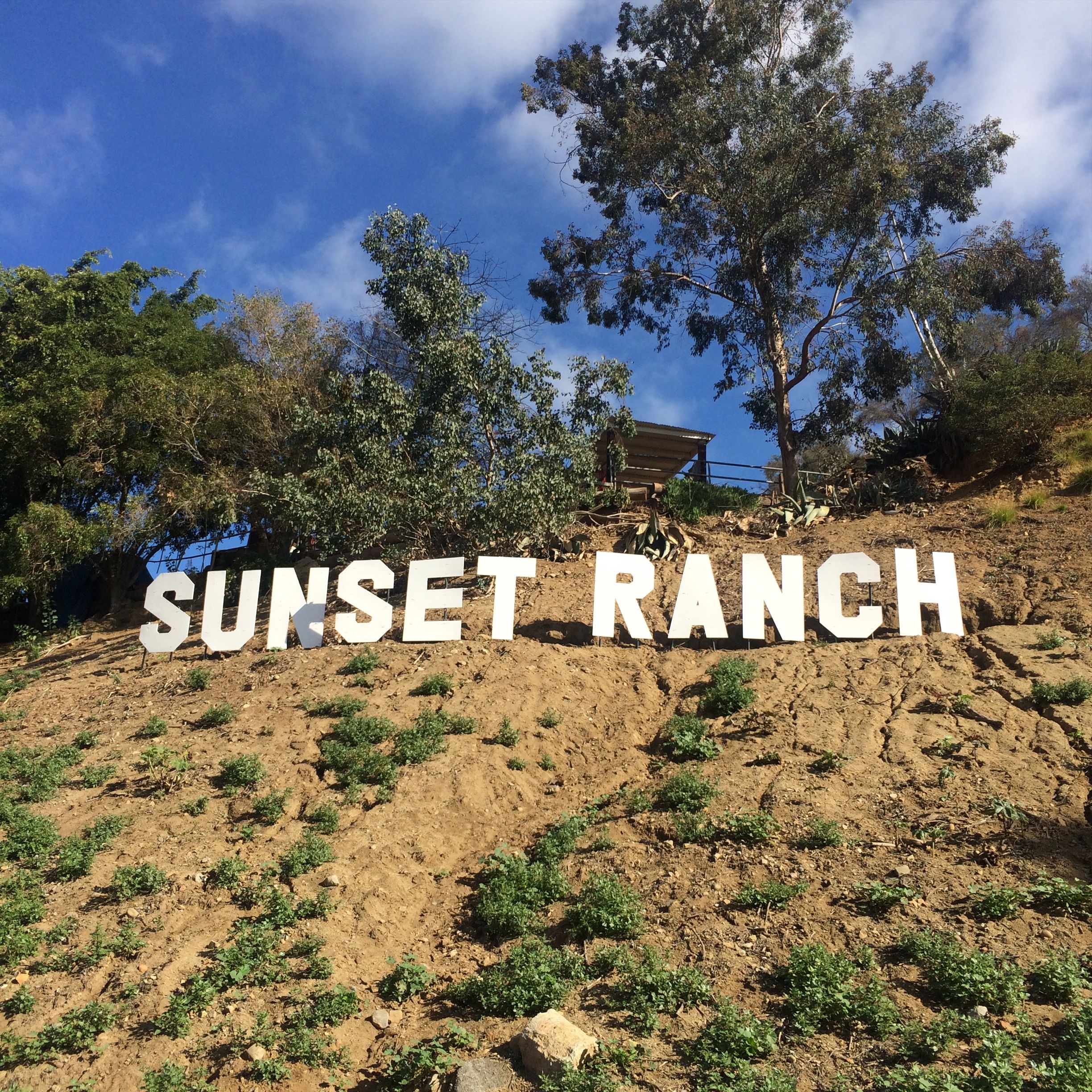 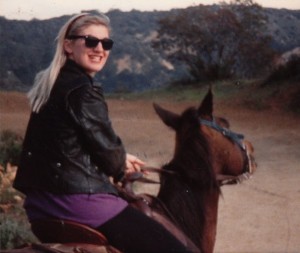 The author at Sunset Ranch, fresh out of Buffalo, half her life ago (photo by Amy Faber)

One of my very first adventures in sunny Los Angeles after I arrived, half a lifetime ago, from grey-skied Buffalo, NY was a horse ride up in Griffith Park at Sunset Ranch. It was the first time I said the words Los Feliz out loud, and I botched the pronunciation, enunciating it the Spanish way on the phone to the guy at the ranch. The guy said he had never heard of “Lows Fee-lease.” I clearly showed that I was a newcomer to the town that would eventually possess my heart and soul. Although I was green, I reasoned it was much better than my pronunciation of La Cienega or Cahuenga. I fell in love with the craggy Griffith Park hills on the hour-long ride and the expansive views of the entire Los Angeles basin. 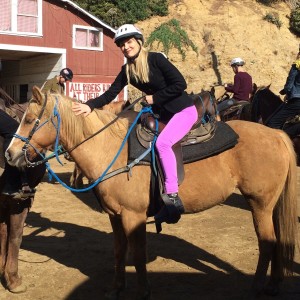 More than half my life later, I still visit Sunset Ranch to find pleasure and escape in climbing upon a friendly horse and riding the scrubby, dusty trails beneath the Hollywood Sign. I’ve ridden at other stables and equestrian centers, but the history and character of Sunset Ranch will always make it my favorite. The drive up Beachwood Ave., past the original Hollywoodland realty development, towards the mythical sign and the stables at the top, will always feel exciting. The horse ride, led by a guide and done in a group, follows twisty trails carved out in the 1920s. With views of the sign, it can be done in either one or two hour durations. There is also an extra special Friday Night Fiesta Ride which covers over 7-round trip miles of trails, to the Burbank side of the park, in about 5 hours, with a fun stop at the vintage 1962 Mexican restaurant Viva Cantina. 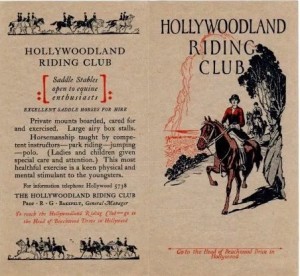 1924 brochure for the Hollywoodland Riding Club

The history of Sunset Ranch and the stable’s property is pretty much exactly as old as Hollywood itself. Still owned, three generations later, by the family of the original owner, a rodeo cowboy named Jute Smith, it is truly the real deal. The land itself at 3400 Beachwood Drive has been home to horses since 1923 when the Hollywood Riding Club and school was formed as an incentive to lure wealthy home buyers into purchasing houses in the brand new Hollywoodland development. In 1925 the Riding Club began offering Discovery Rides into the Hollywood Hills and into the neighboring park that Griffith J. Griffith, the rich developer of Los Feliz, had donated to the city in 1896. The popularity of these Discovery Rides was obvious when over 400 riders on horseback joined in a trail jaunt in April 1925. 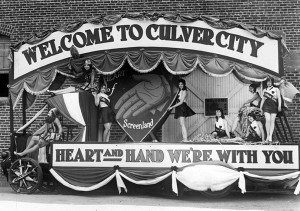 Meanwhile, in 1929, across town in what was then faraway Culver City, a 20-year-old rodeo horseman named Julian “Jute” Claude Smith, born in Atlanta and raised in Los Angeles, bought a few acres of undeveloped land near Slauson Avenue and started Sunset Ranch. Jute, a tried and true horseman, was one of the original members of the Professional Rodeo Association and imagined his new ranch as a place for Wild West rodeo shows, barn dances, hay rides and quarter horse racing. He ran Sunset Ranch at this location for almost 25 years and raised his family there. As time moved on, the city became more populated, and in 1952 developers and changing zoning laws forced Jute out of the land he had owned for over two decades. Luckily, the old Hollywood stables, down on their luck when the depression hit, and not so trendy at this point, were available for lease. Jute moved his horses and business to this much more beautiful and historic location, soon buying the property himself. 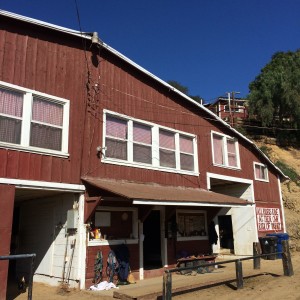 With history often comes ghosts, and legend has it that Sunset Ranch is haunted by at least one of them. Spooky stories say that those alone at night in the old and creaking-with-character barn have heard eerie echoes of a man hanging himself with a rope. Romantic tales refer to a Romeo and Juliet love affair between a young Mexican stable boy and a Caucasian daughter of a wealthy Hollywoodland family, but the truth of the hanging is almost as weird. The suicide actually seems to trace back to one of Hollywoodland Riding School’s original riding instructors, Robert G. Bakefelt, who had moved to Los Angeles from Washington DC in the early 1920s. According to Hollywoodland historian Mary Mallory in a brilliant 2014 article for The Daily Mirror, “Unfortunately, Bakefelt seems to have been shy and suffered problems with women, feeling most comfortable around horses. On July 13, 1924, Bakefelt committed suicide by hanging himself from the rafters of the stable. There was no suicide note, only letters from and to a “Butterfly” the paper suggested was his wife… Further investigation in the LA Times reveals that on December 28, 1921, 43-year-old Bakefelt obtained a marriage license in Santa Ana to marry 22-year-old Doris Longworth of Nebraska. She declared in the last letter June 27, 1923, that their love was only physical and that she realized she wasn’t made to keep house. His 14-year-old son from a previous marriage discovered him after returning from a walk.” 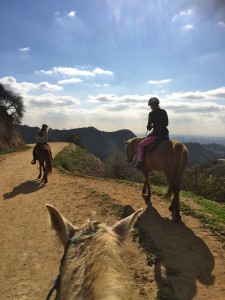 Today, over 60 horses are kept for riding at Sunset Ranch and many of those are rescue horses. An additional 20-25 are boarded for other owners. The ranch has been used as a location for many films and TV shows, including a scene in David Lynch’s Mulholland Drive. The ranch is still owned today by the family of Jute Smith, whose children and grandchildren have stayed active in quarter horse racing and showing. Jute’s son, Steve Smith, ran the ranch from 1970 to 1995 and his grandson, Steve Smith Jr. owns it today. 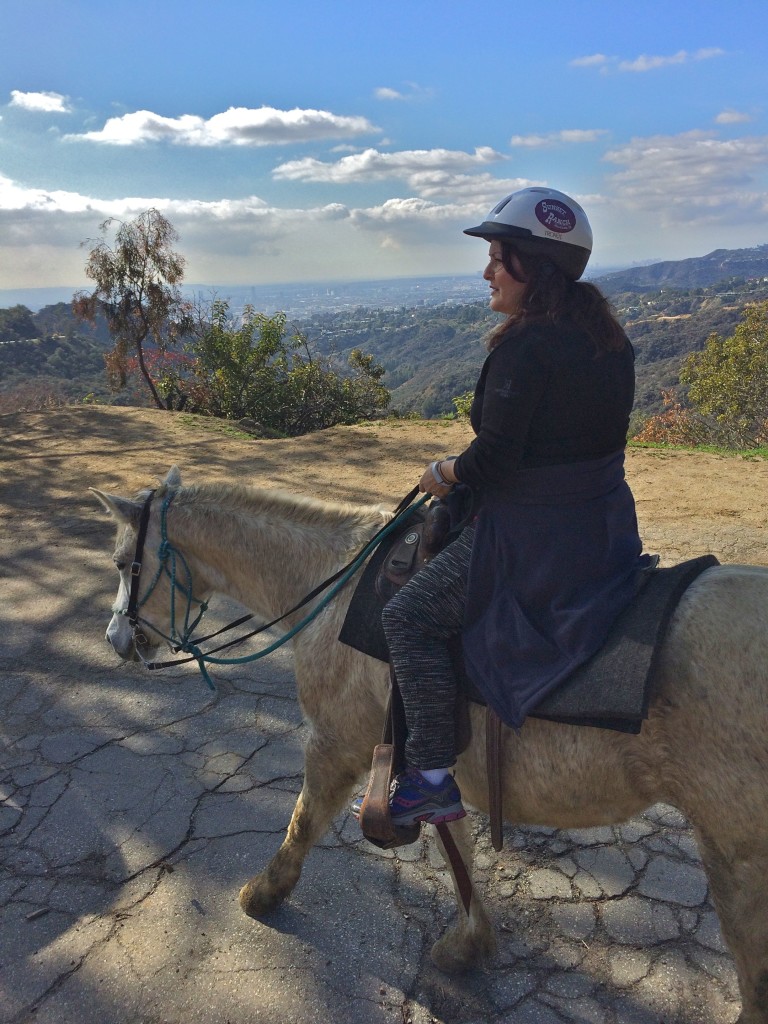 Nikki Kreuzer has been a Los Angeles resident for over 30 years. When not working her day job in the film & TV industry, she spends her time over many obsessions, mainly music, art and exploring & photographing the oddities of the city she adores. So far she has written 110 Offbeat L.A. articles, published at the Los Angeles Beat. As a journalist she contributes regularly to LA Weekly, Blurred Culture and The Los Angeles Beat and has also been published by Oddee.com, Twist Magazine, Strobe and Not For Hire. Nikki is also a mosaic artist, radio DJ and published photographer. Her photography has been featured in exhibit at the Museum of Neon Art, in print at the LA Weekly and is part of an upcoming show at the Neutra Museum in Los Angeles. She has recorded with the band Nikki & Candy as bassist, vocalist and songwriter, directing and appearing in the 'Sunshine Sunshine Santa Claus' music video for the band. She co-hosts the monthly radio show Bubblegum & Other Delights on Dublab.com. Her acting credits include a recent role in the ABC-TV show 'For The People', 'Incident at Guilt Ridge', 'Two and a Half Men', the film 'Minority Report' and 'Offbeat L.A.', a web series, written and hosted by Nikki Kreuzer. Her writing, radio and video portfolio can be found at OffbeatLA.com, her photography work @Lunabeat on Instagram and her music history posts @NikkiKreuzer on Twitter. Find Nikki & Candy music on iTunes, Amazon or at NikkiandCandy.com.
View all posts by Nikki Kreuzer →
This entry was posted in Attractions, Miscellanious, Offbeat LA and tagged Hollywood, Nicole Kreuzer, Nikki Kreuzer, Offbeat L.A., Sunset Ranch. Bookmark the permalink.

4 Responses to Offbeat L.A.: Get on Your Pony and Ride – Sunset Ranch in Griffith Park