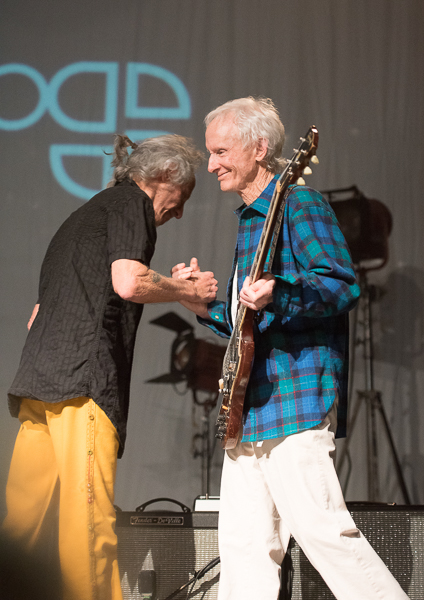 When you’re at the Fonda theater to see The Rolling Stones, the only thing separating you from the stage is that pit filled with photographers (or one if it’s The Stones). Last night however, there was nothing separating me from the band. I’m in a pit filled with more photographers than I thought possible in such a small space, and I’m about to have an intimate evening with the stage, the backstage, the center stage, and….The Doors!

I love the drive out to Hollywood (the Hollywood filled with musical reminders, not the Hollywood with the hookers and Darth Vader in front of the Chinese Theater). The Hollywood I love is the one where you drive down that quaint, curvy part of the Hollywood freeway, where you feel like you’re skimming by the rooftops of hip little apartments, get off at Vine, and cruise past the Capitol Tower (where the king of cool, Frank Sinatra recorded his best stuff). You turn left at the crowds of tourists, and the Fonda is right there. Nice and close.  Part of any great show in Los Angeles is the anticipation and love for Los Angeles that this drive creates in me.  It’s what I imagine rounding third base for a stand-up run must be like.  Hey, this is The Los Angeles Beat, I get to love my city in print.

The last time I was here was when The Rolling Stones played that private club gig, but then I was just a lucky concertgoer. Tonight, I’m “credentialed”, which depending on how you read this can just mean a luckier guy than I was last year. So I’m here in the pit, waiting for the start of the tribute to Ray Manzarek, who was born on Feb 12. The remaining members of The Doors are hosting a celebration of Ray’s life by basically performing with a huge list of other musicians, and playing all the Door’s greatest hits.

Filling the very large shoes of Ray Manzarek on keys was Rami Jaffe of The Wallflowers and Foo Fighters, who did a more than ample job, which is an understatement.  Warren Haynes and Taylor Hawkins both took turns on vocals, not just “filling in” but adding an element to the mix. Densmore was either being gracious, or was truly not up to playing the whole gig, explaining “I blew my ears out playing those things” so he relinquished the kit numerous times, mostly to fellow drummer Stephen Perkins of Jane’s Addiction. Other notable musicians performing were Exene Cervenka and John Doe of the band “X”, guitarist Brian Ray, Emily Strong of Dead Sara, and Andrew Wyatt of the band “Mike Snow”.

Now, if you’re thinking “It’s not The Doors, not without Jim Morrison and Ray Manzerek” I’ll forgive you. But music doesn’t have to stop dead in it’s tracks just because a band member did, does it? You ever sing along to a Door’s song at your local pub? In your car? You bet you have. And you loved it! Well, tonight was no different. Robbie sang some parts, Taylor Hawkins sang, there were a host of guest singers, and it sounded great. Everyone was singing along in unison and they were INTO it. And so was I (try shooting pictures when you’re rocking out)… 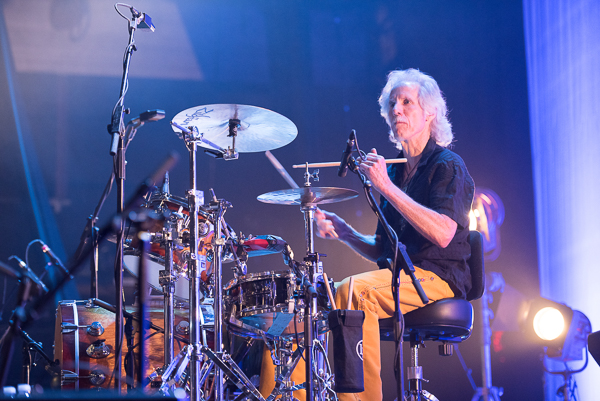 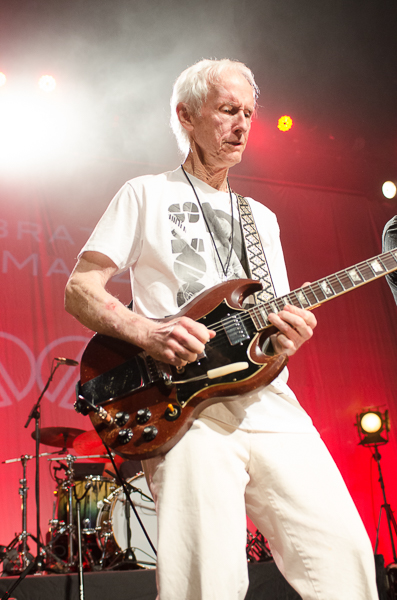 The show started fittingly enough with their biggest fan ever, Jim Ladd, who came out and spoke about the band and the about-to-happen show. It is fitting that Mr. Ladd did this as he was and remains one of the best-loved radio personalities ever and a huge promoter of the Doors. He has kept their music alive on the air since the band split. Jim Ladd is a soothing voice in the warm California night, spinning those great old Doors songs while you cruise the 405 as the sun sets. It’s partially why we live here. 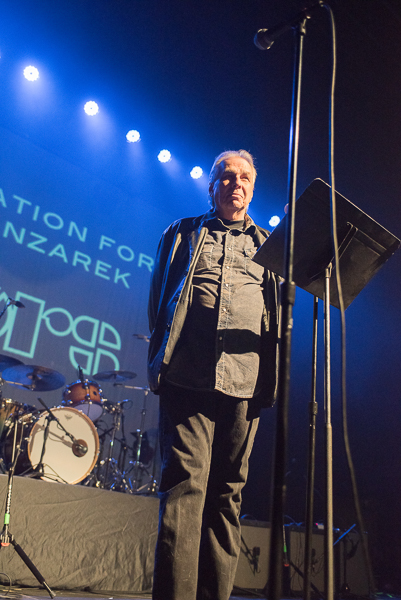 When Densmore and Krieger took the stage, it was no different than any other really amazing acts I’ve seen. The crowd there was IN LOVE with the band, and the band felt the love come right back at them. John Densmore had a great rapport with the audience through the whole show. Quite a contrast to his personal self, but that’s another story (or maybe the end of this one).

The theater was packed, and I mean really packed. More packed than it was at The Stones gig last year, but the Stones only sold 100 tickets.  I spoke with a handful of concertgoers who had flown in from some far points for this show who were thrilled to be there.

Near the start of the show I hear that Henry Diltz is in attendance, and why not? He did after all shoot the cover of The Door’s “Morrison Hotel”. Hell, they named the gallery for it. In case you don’t know, Mr. Diltz is one of the greatest photographers ever to hoist a camera, and he’s one of my icons.  I was afforded the rare pleasure of interviewing him in 2015 and well, I guess you’ll have to read that piece…. Midway through the second set, I decide to “go looking” for Henry and eventually find him  downstairs, where the real backstage is. You know, bottled water and tortilla chips. As usual, not much goes on back there and I tend to let whatever happens backstage stay backstage.  I get a huge thrill speaking with him.  This man has reached heights that most only dream of, and he’s just such a nice guy!

So back upstairs, there were a lot of personal anecdotes put out there for the hunger of the willing audience, who were taken along for the ride for over two hours. Musically, the show did not have a single dead spot, it fired on all cylinders and never stopped.

The set list for the show was a start-to-finish greatest hits list. I do emphasize the “great” part:

Great set list, great musicians, great venue! Densmore has lost nothing over the years, his snapping percussive abilities sound as good as they did on all those records, and Krieger, with his signature Gibson SG, slide in hand, with that familiar touch of Flamenco had the power to take you back to a time and place that’s comfortable and has the power to move you, while not sounding like some oldies show. It sounded current and fresh. 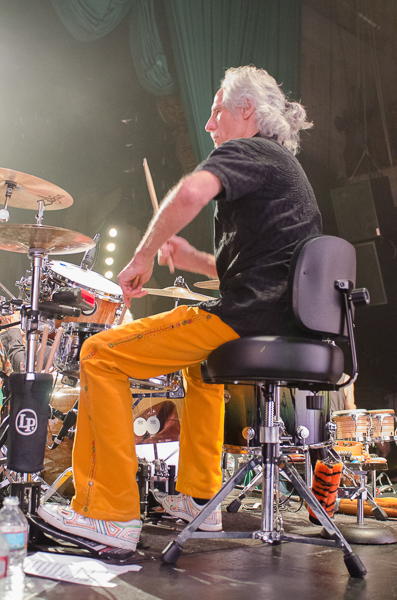 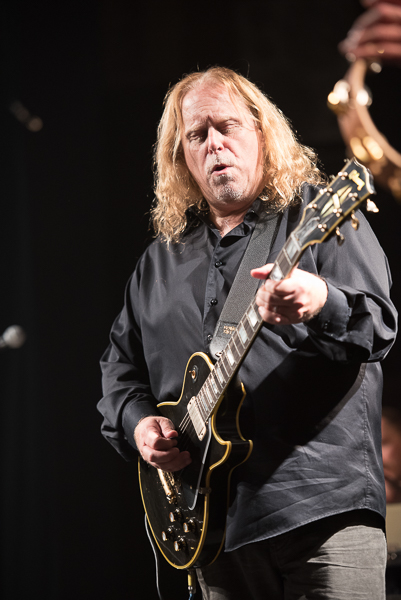 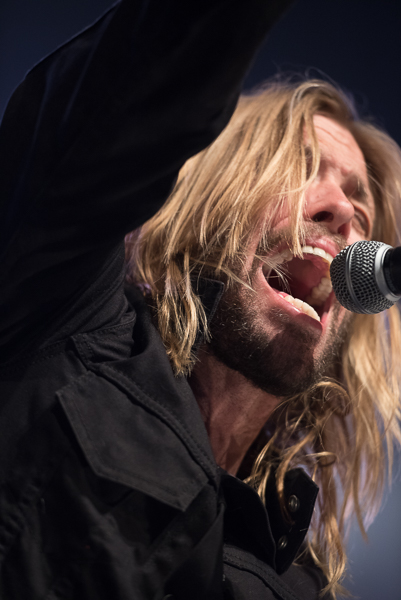 Ivor Levene likes to interview musicians, write about music and musicians, play music, listen to music, read about music, photograph musicians, and anything else you can think of with music. He has been involved with the music scene for over thirty years and his posts have appeared all over the place! Ivor says "I'm going to write about music as long as I have something to say".
View all posts by Ivor Levene →
This entry was posted in Events, Miscellanious, Music, News & Sports and tagged #johndesnmore, #livemusic, #livemusicphotography, #raymanzerek, #robbiekrieger, #thedoors. Bookmark the permalink.