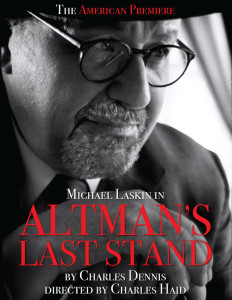 The poster for Altman’s Last Stand.  Poster courtesy of The Zephyr Theatre.

“Years ago, a now famous psychiatrist in London mentioned an Auschwitz survivor that he was treating. It had a profound effect on me when he told me that the elderly Jew had attempted suicide. That story continued to follow me. I gave this anonymous senior a name and then I realized that he, Franz Altman, was a metaphor for the underdog’s of our world learning to fight for their place in modern society!” – Charles Dennis, Playwright

Set in a midtown Manhattan second hand shop, in the year 1990,  his play spans a full century, boldly taking on the “hot” topic of gentrification while simultaneously exploring modern media’s important role in helping everyday people to assert their individual rights, despite the pressures of our ever-changing, modern world.

Altman’s Last Stand synopsis: analyzed at age seven by Sigmund Freud, the Viennese-born Franz Altman has lived and loved all over the world. Now into his one hundredth year, Altman has become a media celebrity neither because of his personal longevity nor his romantic and fascinating younger days. Instead, his current fame is the result of his valiant, personal struggle against forces all around him that threaten to destroy the very thing that gives his life true meaning and purpose: his beloved business.

Franz Altman discovers that his midtown Manhattan second hand shop, “King Solomon’s Treasure”, is now the target of powerful and ruthless developers who have already bought up all the buildings around him in order to erect a high-rise. Only one thing stands in their way: Franz Altman. Altman refuses to sell. “This shop is my life!” he declares. His battle with the developers becomes a highly rated episode of CBS’s “60 Minutes.” Everyone wants a piece of Franz Altman, including a young female journalist from People magazine who arrives at his shop, determined to interview him. Through the next 75 minutes, Altman takes her on an unforgettable journey through the Twentieth Century that he has lived through…and savored every minute of.

The Los Angeles Beat was there to attend the play’s star-studded, fun-filled opening night party on Saturday Feb 6th! Among the celebrities who attended were actors Hector Elizondo, Ed Begley Jr., Michael Laskin (who portrays Altman in the play), director Charles Haid and playwright Charles Dennis. 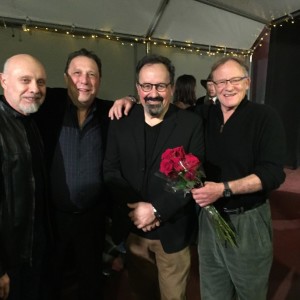 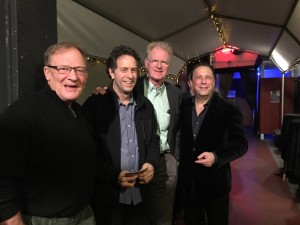 Billed as “A story of history, survival and Jewish identity” this play took me on an emotional roller coaster that I didn’t want to get off of. Equal parts laughter and tears, it showcases a simply amazing performance by Michael Laskin (who portrays Altman in the play).  Gentrification is an on-going, hotly debated issue within America’s urban landscape. Not an easy subject matter to cover in less than two hours. Nonetheless, Altman’s Last Stand does precisely that with pure panache.

About The Zephyr Theatre: http://www.zephyrtheatre.com/about

A native of Southern California, Shirley Peña began her career as a music journalist almost twenty years ago, writing for her websites "Stars In My Eyes: the Girlhowdy Website" and "La Raza Rock!" and progressed to creating various fan sites on Yahoo, including the first for New Zealand singer/songwriter Tim Finn. From there, she became a free agent, arranging online interviews for Yahoo fan clubs with various music artists (Andy White, John Crawford, Debora Iyall, John Easdale, etc.). She also lent her support in creating and moderating a number of Yahoo fan clubs for various music artists from the 1990s-today. As a music journalist, Shirley Peña has contributed to a number of magazines (both hard copy and online), among them: Goldmine, American Songwriter, Classic Drummer Magazine and UK-based Keyboard Player (where she was a principal journalist). A self-confessed "fanatic" of 1960s "British Invasion" bands, Classic Rock and nostalgic "Old Hollywood ", she also keeps her finger on the pulse of current trends in music, with a keen eye for up and coming artists of special merit. Shirley Peña loves Los Angeles, and is thrilled to join the writing staff of The Los Angeles Beat!
View all posts by Shirley Pena →
This entry was posted in Miscellanious, Theater and tagged Charles Dennis, Charles Haid, Michael Laskin, Zephyr Theatre. Bookmark the permalink.