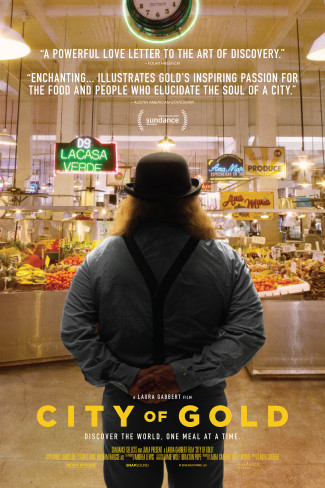 As American cities become homogenized, falling to the empires of Applebee’s and Olive Garden, Jonathan Gold searches out the lost tribes, reminding us that there are still countless unique experiences waiting. He is a cultural anthropologist, revealing the city of Los Angeles through the food of the people and the stories of their immigrant ancestors. But he is not a dispassionate commentator. He is really rooting for the little mom and pop places, and they respond with warmth and respect.

In “City of Gold”, the Pulitzer prize-winning food critic is both our teacher and our guide. Driving his creaky old Dodge Ram past the lavanderias and check cashing stores, he takes us into the heart of the city’s multicultural mosaic. Along the way we visit some of the places that he has already made familiar to Angelenos, like Jitlada, which serves up the best Thai food in LA, Roy Choi’s trailblazing Kogi truck, and Gueleguetza, the Koreatown outpost of Oaxacan food that was recently named an ‘American Classic’ by the James Beard Foundation. Gold also takes us into insular communities unfamiliar to even his most faithful acolytes. Who knew we had a Tehrangeles here?

Documentary filmmaker Laura Gabbert, using overhead shots and POV, captures the rhythm and colors of Los Angeles the way Jonathan Gold captures its flavors and sensations. Together, they reveal the essence of the city in a way it has never been realized before.

The editing is used to its best advantage, adding some humor by cutting to Chef Ludo Lefebvre’s eye twitching as Gold enters his restaurant. The soundtrack reflects whatever era or experience Gold is discussing, with music by Bach, The Germs, and Funkadelic. There are a few talking heads, but most of the voiceovers are the words of Gold himself, including the lyrical writing for which he is known. And that is really what this film is all about. Nothing can surpass his beautiful similes, as he describes a black mole as “…so dark that it seems to suck the light out of the airspace around it, spicy as a novela and bitter as tears…”

Born and raised in the great city of Los Angeles, this food, culture and music-loving punk rock angeleno wants to turn you on to all that is funky, delicious and weird in the city. While Elise holds down the fort, her adventurous alter ego Kiki Maraschino is known to roam the country in search of catfish.
View all posts by Elise Thompson →
This entry was posted in Food, Movies and tagged city of gold, city of gold review, Jonathan gold, los angeles restaurants, movie review city of gold. Bookmark the permalink.