Carol Channing Rings in 95th Birthday Like a Diamond Studded with Stars! 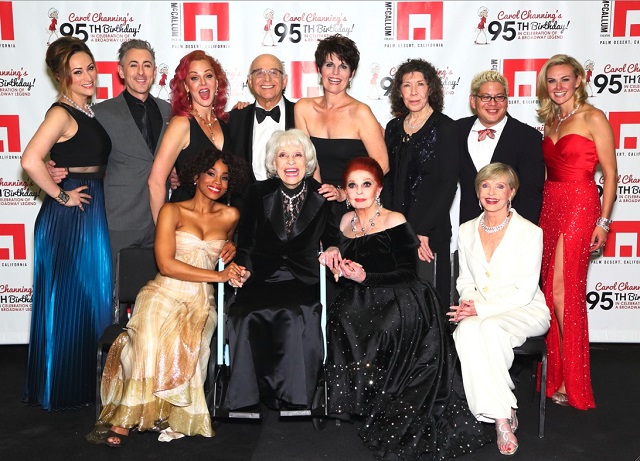 When one thinks Carol Channing, one can only be reminded of things like Diamonds, Song and Dance and a welcomed and adored Lady named Dolly! A legend in her own time Carol Channing recently celebrated her 95th birthday in a gala to beat nearly every celebrity gathering and variety show of which one could ever conceive!

Stars both classic and contemporary graced the stage and house alike of Palm Desert’s McCallum Theatre on the night of March 5th all in honor of a near century of skill, style, and success from one of stage and screen’s most notable performers. The fete itself was a performance to behold in a title all its own:  Carol Channing’s 95th Birthday! In Celebration of a Broadway Legend and was high octane enough to require a producer/director, musical director/orchestrator and choreographer alike all courtesy of Chad Hilligus, Steven Baker and Charlie Williams respectively!

Even more stars graced the footlights thereafter with some vivacious versions of standards made so celebrated by the songstress herself: Laura Bell Bundy sang, I’m Just a Little Girl from Little Rock and Diamonds are a Girl’s Best Friend. Anika Noni Rose regaled the crowd with Jazz Baby from Thoroughly Modern Millie followed by the incomparable Eden Espinosa in her melodious declaration: You Haven’t Lived Until You’ve Played the Palace from Showgirl. But the fun didn’t stop there as Thomas Lauderdale and Storm Large of Pink Martini performed Calypso Pete from Show Girl.  Tom Wopat, bereft of any neighbor remotely resembling Boss Hogg–but dressed as dapper as a Duke–belted out Razzle Dazzle from Chicago all culminating in the highlight of all high notes , a real scene stealer of striking songistry by 92-year-old Carole Cook in her enraptured rendition of Before the Parade Passes By from Hello Dolly!

And you would think that would have been all there was… but wait…there was MORE! Video greetings from all over the world played in droves from such luminaries as: Dame Julie Andrews, Barbara Walters, Angela Lansbury, Whoopi Goldberg, Brooke Shields, Melissa Manchester, Valerie Harper, Kaye Ballard, Betty White, Kristin Chenoweth, Lee Roy Reams, Carol Burnett, Leeza Gibbons and President Bill Clinton along with the Broadway casts of She Loves Me, Beautiful: The Carole King Musical, Chicago, Fiddler on the Roof, Les Miserables, Wicked, An American in Paris, Fun Home, The Phantom of the Opera, Jersey Boys, Spring Awakening, Matilda, Kinky Boots and last but not least, The King and I!

To top that all off with the inclusion of all that is altruistic, the McCallum Theatre has instituted The Carol Channing Fund for the Arts for the purpose of venerating the celebrated stage and screen star’s untiring sponsorship for the arts and arts education. Said Fund enables the McCallum Theatre to carry on providing invaluable instruction and outreach programs to students and educators alike in California’s Coachella Valley. The McCallum theatre is a 501 ( c ) (3) nonprofit organization.

For more information, or to contribute yourself, (by clicking “Donate Now” at the top of the page) please visit:

Or you may give by check made out to McCallum Theatre and send to 73000 Fred Waring Drive, Palm Desert, CA and denote whether online or via check that your donation is a contribution to the Carol Channing Fund for the Arts.

Jennifer K. Hugus was born at a very young age. At an even earlier age, she just knew she would one day write for the LA Beat! Having grown up in Massachusetts, France, and Denmark, she is a noted fan of Asian Cuisine. She studied ballet at the Royal Danish Ballet Theatre and acting at U.S.C. in their prestigious BFA drama program. She also makes her own jewelry out of paints and canvas when she isn’t working on writing absurdist plays and comparatively mainstream screenplays. Jennifer would like to be a KID when she grows up!
View all posts by Jennifer K. Hugus →
This entry was posted in Miscellanious, Theater and tagged Carol Channing, Carol Channing's Birthday, Palm Desert, The Carol Channing Fund for the Arts, The McCallum Theatre. Bookmark the permalink.

2 Responses to Carol Channing Rings in 95th Birthday Like a Diamond Studded with Stars!